Where to Eat at Oakland International Airport (OAK)

Share All sharing options for: Where to Eat at Oakland International Airport (OAK) 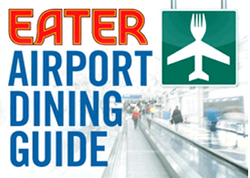 The obvious underdog of Bay Area International airports, OAK is coming into its own a little with regard to meal options. Here again is Eater's comprehensive list to its dining venues, just in time for summer travel season. To be noted are historic venues like Heinold's and ample veggie and gluten-free options. Consider this your back-pocket guide the next time you're terminal bound.

1. Heinold's First and Last Chance: The original Heinold’s watering hole was built in 1880 from “the timbers of an old whaling ship.” OAK’s outpost of the historic bar may not claim the same architectural pizzazz, but like the original, it offers strong drinks and local flavor. No food is served here, but snackers can grab a pie from the next-door Pizza Hut.

2. Fenton’s Ice Cream: Like Heinold’s, Fenton’s has a long history in the Bay Area: the first creamery was opened in 1894, when milk was still being delivered by horse-drawn carriage. OAK’s scoop shop serves a rotating selection of flavors, among them Swedish milk chocolate and coffee cookie dream. Regular patrons advise against the savory dishes, but highly recommend the marshmallow sauce.

3. Pyramid Ale Taproom: Though not a restaurant per se, the Pyramid Ale Taproom is worthy of your pre-boarding time. Beer lovers can take comfort in the Taproom’s selection of Pyramid ales (including the signature Apricot Unfiltered Wheat). The Taproom also provides seasonal specialties and offerings from the local Anchor Brewing Company.

4. California Pizza Kitchen: Groups of travelers face the task of finding a restaurant that meets everyone’s needs. Enter CPK, which serves pizzas, salads, sandwiches, and small plates like the crispy mac & cheese. True, CPK may not meet gourmands' standards, but the chain provides gluten-free and vegetarian/vegan menus, making it a solid choice for those with dietary restrictions. Breakfast is served at this location.