Ian Begg and Ryan Maxey of Txoko in North Beach

Share All sharing options for: Ian Begg and Ryan Maxey of Txoko in North Beach 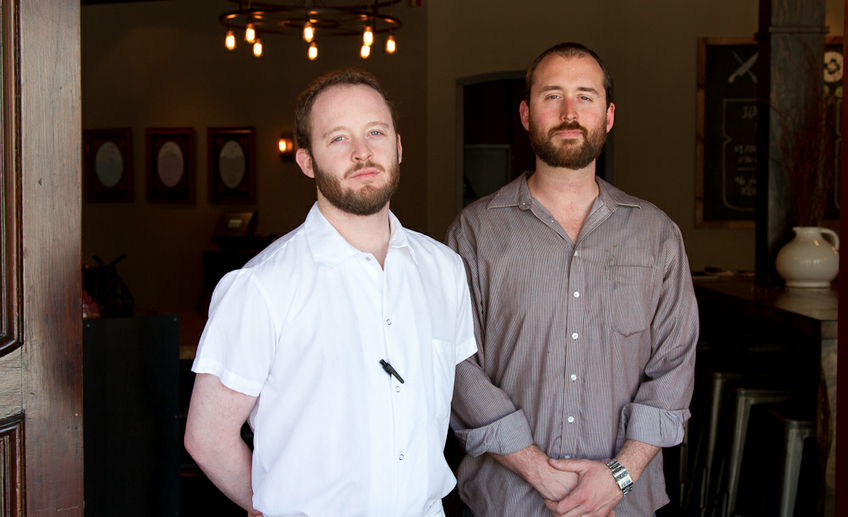 Txoko is the Spanish-inflected restaurant tucked into the storied former home of Enrico's, amidst the hustle and bustle of a very special strip of North Beach known as Broadway. The owners, chef Ian Begg and front-of-house charmer Ryan Maxey, are no strangers to the neighborhood, having run Naked Lunch, their popular daytime meal stop next door since 2009. Over the past year, Begg and Maxey have carved a new niche for themselves on the block with Txoko, offering a unique menu reflecting Basque and Californian influences, along with the owners' many years of experience in the industry. We sat down with Begg and Maxey to talk about foie gras, sex in the bathroom, and why everyone wants cocktails these days.

One year in, did things turn out how you expected?

Ryan Maxey: The product and the resturant more or less, for me anyway. I've never been more proud of anything I've ever been associated with in a restaurant. I think Ian and I both envisioned this being a little more bar-centric, whereas the dining room has kind of taken over the soul of the restaurant, which is fine. I think the bar will follow because what they're doing at the bar is so solid. It's been a battle getting people to come back to Broadway, and we knew that going into this. Ian Begg: We switched the concept a little bit to be more entree-centric, but other than that it's been what we hoped for.

What has worked in getting people back to this neck of the woods?

RM: When Ian and I look to go out, we're looking for one thing: qualilty of product. But a lot of the folks want theme-oriented things, so we have to be a little more creative. Things like the foie gras dinners have really worked, and it's not just a theme, it's also a repetition thing. So you can always bank on the fact that Wednesday, we're going to have a foie tasting menu. It's kind of comforting for people.

Have you thought about what you're going to do after July 1 when the foie ban sets in? RM: We'll probably do something else, but we're not sure.

What were the biggest surprises in the first year?

IB: Because we had Naked Lunch before we opened this, we pretty much knew what was going on here as far as the neighborhood. RM: I always find it fascinating, how many people have an emotional attachment to what was here. You'll get people in their 40s that say "Oh I came here in the 90s," people in their 50s and 60s say they were here in the 70s. Some people come in here and tell me stories. Some people come in and just get mad.

Any stories that stand out?

RM: I had a guy who ate dinner here for his 70th birthday, and he walked up to me right as he was leaving and he said I want you to know something. I've had in sex in this restaurant in three separate places, three different times. I said, well are you going to humor me and tell me where? He said, well, once in the VIP booth, once in the bathroom. And once at the bar. He said it was way back in the day, and things were getting a little crazy, and he literally was having sex with this woman at the bar and nobody knew what was going on.

Amazing. He was the nicest guy. In a suit. I was falling over laughing.

So how is the menu revamp going?
IB: I feel like it's easier for people to grasp. Before we had people that wondered why they weren't full from small plates. It's mainly local people coming in and I think it's a perception and value thing that people have that isn't necessarily related to reality. RM: My job is to guide people to make sure they have the best experience. Being in a city that's so food-centric, I think the double edged sword is that people are more scared to come up and ask questions. Ian and I have more than 16 years a piece in this business, and if I go to someone else's place, I love to ask questions. It's rare that I get people that ask me to tell them what to do with our menu. Our servers used to suggest ordering more pintxos and I think people perceived it as that we were trying to gouge them. Once we switched to entrees and apps, people knew what to do.

What's your clientele like?
IB: We definitely have a lot of younger types. Sometimes they'll come through after going to the bar. It's pretty mixed. RM: It's defintely a younger demographic than we were used to working with because we were both in fine dining for so long. Predominately 20 to 40, and the people that are really interested in food. I'm from a wine background, and everyone that comes in...cocktails are the thing. It's great because Jason does a wonderful job. A lot more people are ordering cocktails than wine. I have to grit my teeth sometimes because I love to pair wine with food, and so many of Ian's dishes are delicate, but if people want cocktails they get cocktails.

What are the standouts on the menu that've stayed with you since the beginning.
IB:The chuleton, the bone-in rib eye, that's a staple, We always have a roast dish. We do a cremosa that's like a risotto but it's from the North of Spain. We always have foie gras, we have foie gras ice cream, oysters. Now we have a whole roasted chicken, another big shared dish. The accompaniments change depending on the season.

What didn't work?
IB: I think the main reason we switched from Hotel Majestic was because we wanted to be more affordable, and approachable in a relaxed atmosphere. We were trying to get rid of the fine dining things that add up for the restaurateur and remove them so we can take the price down, but that wasn't perceived how we wanted it. People still saw it as expensive, even though they were getting very high quality proteins, soft shell crabs, foie gras, for reasonable prices. We got a little more rustic so we could increase portion size. People get more starch and they get more full.

What are you thinking about for the next year?
IB:Trying to get the word out more. That's our daily thing. Promote Txoko more and more. We're still finding out a lot of people don't know we're here.

How is it being a part of a neighborhood that's considered strip club-centric?
IB:There's definitely some good people in this neighborhood trying to do stuff. We've got 15 Romolo, Comstock Saloon. Eventually I think it's going to continue to improve. One of the main things, I notice the reviews will start with, you know, "seedy, smoky, strip club laden" I think that hurts the neighborhood, because it's really not that bad. You know it's the old Barbary Coast feel. When people come, they're totally fine with the neighborhood.

How much interaction is there with the other spots?
RM:Voice of Broadway. There's more of a positive feel here on the street of life. The owner over at Monroe has really taken an active role in bringing the street together. He's doing a lounge. It's an upscale thing. It's bringing good people. Instead of some of the others that will remain unnamed. We'll talk about developing a CBD, a community betterment district, and basically just trying to get some of these other guys to account for the fact that they're bringing a seriously negative element to the neighborhood that's damaging everyone. In terms of everyday interacting with people operating some of the skeesier businesses, no. In fact our friends are at 15 Romolo and Comstock.

Do you go there a lot?
RM:Not as patrons, but if I need some sugar I know where to go. We borrow stuff from one another. We're friends. One of the biggest problems is people are freaking about on parking. And everything is in the Mission these days. I wonder what's going to happen there in three to four years. I think it's going to get saturated. They have BART right here. The shitty thing about North Beach is that some people have to walk to get here. And that's a big deal for a lot of people.

Ian, what do you wish people ordered more of on the menu?
IB: I'm pretty pleased with how adventurous the diners are. We have some head cheese and sweetbread, sea urchin and we sell a lot of it. People are going for it.

So, does it feel like it's been a year?
RM: It's gone by so fast. The stress and the exhaustion and everything we deal with, that you hate and love at the same time. It takes a toll on you. We didn't get the blessing of some of the more higher up critics in the city, so we've had to play the underdog role and develop it more grass roots. The thing is every night when I'm in here, every person I send out loves it. That means more than anything to me. Granted it's always nice to have a good critic review, to reach a larger audience, but we're doing it one person at a atime. It's the hard road. IB: Nothing good comes easy. It'll be that much more worth it when we move on to year two.

Any other restaurants?
RM:We've got our work cut out for us right there. It's interesting I see people do really well six months in and then open another place. But you get a problem when you spread yourself too thin.

It works better with burger joints and pizzerias.
RM:You're right and so many places that are hot right now, and that Bauer loves are burger and pizza places. IB:It's disappointing for me as a chef because SF is supposed to be one of our top food cities, and to have the top places be pizza and hamburger driven. It's either that or the four star. It's great, but we're losing the middle road. For a food scene I think it's disappointing. We want to bring interesting food to a broader audience.