Share All sharing options for: Papazote Moves Forward, But Needs A New Name

Yesterday the Planning Commission gave its blessing to future Mexican restaurant Papazote and its plans to open a full-service restaurant in the former Eos space in Cole Valley. Unlike other neighborhoods, the local community has come out resoundingly in favor of the new restaurant, and no one showed up to protest at City Hall yesterday. This means owners Nate Valentine, Stryker Scales, Sam Josi, and Jordan Dunn can now get to the real work of opening on Carl and Cole. One thing though, they've got to change the name. Valentine and his partners were approached by the owners of local Mexican chain Papalote, who fear the similarity of "Papazote" to "Papalote" will confuse people. "We really loved the name, it's connection to [sister Marina restaurant] Mamacita, and that it meant big daddy," said Valentine. "If anyone wants to propose something else along those lines, we're open to hearing it"

Regardless of the name, the menu will bear some similarities to the one at the Bauer-approved Mamacita. Chefs Sam Josi and Luis Contreras will come up with the menu, including a tortilleria churning out flour and corn tortillas to order. [*Sidenote: As Josi and Contreras will remain very much involved at Mamacita, a new chef will be hired to run the day-to-day in the kitchen here.] Valentine said the menu will probably rotate around a variety of meats—all of them available on soft, crispy, corn or flour tortillas, as fajitas, and there will be TBA "healthy option" too. Valentine is also working on former owner Scott Holley to release the recipe for Eos' beloved mushroom dumplings, so they can put them on the menu as an "ode to Eos." We shall see. 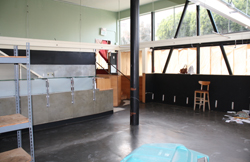 Obviously a lot of the other details are still forthcoming, but know the gents were able to secure a full liquor license from the shuttered Long Bar, so yes, there will be margaritas—the kind with tequila in them. The bar will probably be moved to the ground floor of Eos' former split-level space (pictured, right). Banquettes and communal tables will be added. The partners are meeting with designer Lauren Geremia over the next week and change to hammer out the rest of the design. Got ideas for a good name? Jot them down in the comments or shoot a note over the EaterWire. And plan for the restaurant to open in late Aug./early Sept.