Share All sharing options for: A Guide To San Francisco's 'Secret' Menu Items

Ordering from the menu is fine, but the off-menu, "secret" chef specials around town will tell you something about what the chef really likes to make, or what people are really craving at any given moment. Of course, there are "secret" menu items everyone knows about, like the animal style burger at In-N-Out, but there are also truly unknown items, like some of the things you'll read about in this here guide. Look no further, for some of the best under-the-rader, hidden, hush-hush, or on-the-DL dishes of San Francisco. 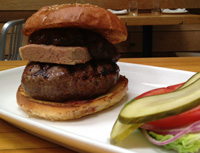 Starbelly
Where: 3583 16th Street, website
What: Regulars know you can order chef Adam Timney's house Prather Ranch burger "Doc's Way," topped with 1.5 oz. of chicken liver pate. At dinner, the burger comes with the usual fixings and fries for $16. Allegedly, it's named after the bartender Doc's preferred way to eat a burger. 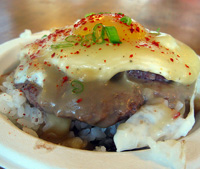 Namu Gaji
Where: 499 Dolores Street, website
What: Chef Dennis Lee has his "famous" loco moco ($14), a hamburger patty topped with a fried egg and gravy, and kimchee fried rice ($14) on the secret menu at Namu Gaji. You can also order the loco moco on top of the rice for $18. Just ask the server if you can order off the secret menu.
[Photo: The Minty]
Michael Mina
Where: 252 California, website
Before bar manager Carlo Splendorini won the 2012 Domaine de Canton Bartender of the Year Competition, his semi-final cocktail was called the Paris of the Orient, made with Plymouth gin, Canton ginger liquer, lime juice, green Chartreuse, and cilantro. It's not on the bar menu, but he'll shake one up for you if you ask. It's $11.

Hog & Rocks
Where: 3431 19th Street, website
What: For late night (10 p.m. to midnight), the bar offers it's most popular brunch item, a spicy fried chicken and biscuit sandwich. It's $15 served with their juiced up "half-and-half" fries. You'll have to try them to find out what that means.
[Photo: Thrillist]

Rosamunde
Where: 545 Haight Street, website
What: Rosamunde Sausage Grill's special off-menu burger used to be a secret. Now a line forms every Tuesday starting at 11 a.m., and they usually run out of meat well before closing time. Unlike some of the designer burgers around town, the simple Rosamunde burger is made with a thin beef patty served on an onion bun with lettuce, tomato, and onion for $6. Thing is, it tastes amazing, probably because it absorbs flavor and grease from the sausages that share the grill.
[Photo: Serious Eats]
25 Lusk
Where: 25 Lusk St., website
What: This SoMa alley restaurant keeps a secret stash of caviar to go with buckwheat blinis, a chilled shot of Russian Standard vodka and a champagne back. Say "secret caviar," pay $42, and it's all yours. 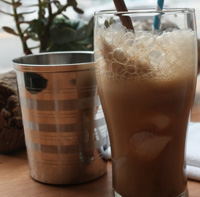 AQ
Where: 1085 Mission Street, website
What: The bar at AQ just started offering a root beer Bourbon float with bark-flavored ice cream, infused with sassafras, gig wood, birch bark, licorice root, vanilla, and sarsparilla. The root beer is made in-house. The off-menu float is $12, or $18.93 with a shot of Eagle Rare Bourbon. 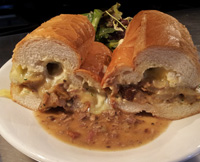 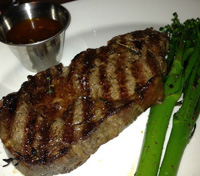 Bluestem Brasserie
Where: 1 Yerba Buena Lane, website
What: Ask for the 12 oz. grass-fed ribeye "goosed-up" and you'll get a steak pan-seared in duck fat and served with a pat of duck liver butter. The restaurant adds a $2 surcharge for the preparation, making the final tally $36.