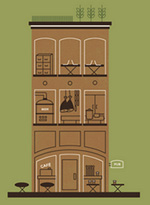 Iso Rabins' huge Forage Kitchen undertaking surpassed its fundraising goal of 150,000 on Kickstarter last night, but he tells Forbes he's only just begun: "He...is considering a large 20,000 square foot building in San Francisco’s Dogpatch neighborhood...The idea is to have a kitchen, office space, brewery, meat-curing room and a cafe. The $150,000 will be put together with capital that Rabins is seeking to raise from investors. It’s a 'few million dollar project,' he says." [Forbes]