This is Hangover Observations, where we share our memories from last night, the night that was. 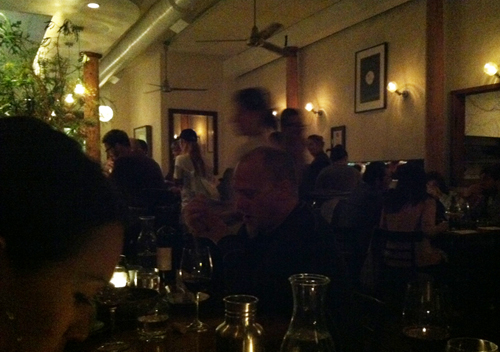 In case you were curious where nearly every big time chef in the Bay Area was eating last night, they were all at Bar Tartine, tasting through 12 dishes prepared by guest chef Christian Puglisi of Restaurant RELÆ. Owners Elisabeth Prueitt, Chad Robertson and chef Nick Balla proudly welcomed Puglisi from Copenhagen, and the night sold out quickly—mostly to industry types— proving the cutting edge cuisine of Scandinavia is very much on everyone's mind. Read a blow-by-blow of who arrived, and what everyone ate, below.

1) Puglisi's creations, including tartine with raw lamb and dried shrimp evoked Denmark on Valencia Street, but the highlight of the evening was seeing so many heavy hitters mingling in one room together.

2) Ravi Kapur of Liholiho Yacht Club and Nopa/Nopalito co-owner Jeff Hanak were among the first to stroll in for bar seats post beers at nearby Mosto.

3) Dominique Crenn sat with friends by the door, effortlessly chic in a slouched beanie and tattered, rolled jeans. Daniel Patterson tucked into the back of the restaurant.

4)Christopher Kostow and wife Martina arrived around 8 p.m., which ended up falling on the early side for the industry set. They were seated next to Town Hall's Mitch Rosenthal at the neighboring table.

5) Saison's Josh Skenes and Mark Bright strolled in with a crew of six about a half hour later.

6) Next in the door was Paolo Lucchesi of the San Francisco Chronicle, followed by David Kinch with girlfriend Pim Techamuanvivit of Chez Pim.

8) At night's end, looking around the room, nearly every table sat at least one chef. Meanwhile Bar Tartine's Balla and chef Puglisi manned the line together watching every dish before it hit the floor.

9) As you know, the new cafe arm of Bar Tartine is now looking great and nearly ready to rock during the day time. Balla said some sort of soft-opening activity may come around next week, leading into the official planned opening on August 1.

10) Take a look at last night's menu below, and soudofdesign's photo set of all dishes served in the Eater SF Flickr Pool. 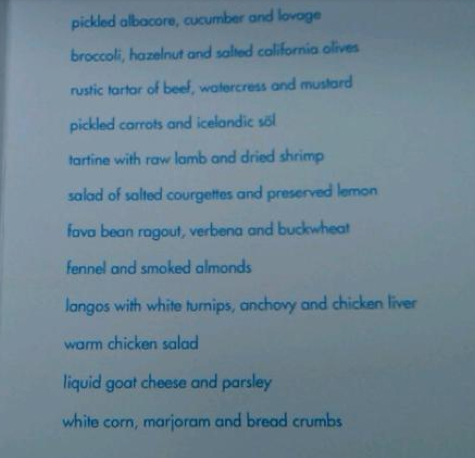