This morning, Soul Food Farm announced via Twitter that they will be closing: 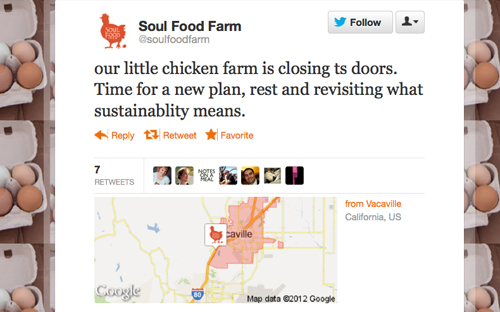 In its heyday two and three years ago, Soul Food Farm had a huge following among Bay Area chefs, selling some 26,000 pastured birds, and 10,000 dozen eggs per year. In ten weeks, all of their chickens will be gone. Owners Alexis and Eric Koefoed say that a number of factors played into the decision.

The cost of feed has continued to rise to the point where they were paying $13,000 per month. The Koefoeds were subsidizing the difference out of their own pockets, so they wouldn't have to raise their prices to the industry. This is without mention of the $4 per bird processing fee, and exhaustion from running a family farm with just two staff members. Add in the recent drought in the Midwest, and the Koefoeds were faced with the ironic reality that running a sustainable, organic chicken farm wasn't sustainable at all for their livelihoods. Eric is 60 years old. Alexis is 47, and neither of them has been able to afford health care for the past five years.

As of today, the Koefoeds have closed all their wholesale accounts, and will continue to sell the last of the birds and eggs to their CSA members. Eric Koefoed will come to the city for one last goodbye when Soul Food birds feature at the Noisette music and food event in August.

After that, they're planning to take a rest and reassess the farm. When and if they come back, they'll need some hands-on help with operations, and they'll have to diversify their 54 acres. Hopefully the general attitude about small farms will experience a larger shift as well.

"When people are paying more for an heirloom tomato or a pasture raised animal, I hope they begin to understand it's a reflection of value," says Koefoed. "We need thousands and thousands of people to understand this. Not just foodies and restaurant fans."