The San Francisco Cooking School (SFCS) will be opening up in the fall of this year, aiming to reinvigorate the tired culinary school model. Shaking things up for sure, will be the school's deans: Daniel Patterson, Craig Stoll and Bill Corbett. And the board of directors isn't too shabby either, including Stuart Brioza of State Bird Provisions, Melissa Perello of Frances, Sara Deseran of San Francisco magazine, Lincoln Carson of Michael Mina Group, Matthew Dolan of 25 Lusk, Ryan Farr of 4505 Meats, Brandon Jew of Bar Agricole, Mourad Lahlou of Aziza, Laurence Jossel of Nopa, Belinda Leong of B. Patisserie, Annie Stoll of Delfina, and Staffan Terje of Perbacco. Just like that, culinary school has a shot at being cool again. More importantly, coursework will avoid tired subjects like aspic and ice sculptures in lieu of developing the skills necessary to enter a fast-paced modern kitchen. Naturally, it will have a decidedly Bay Area bent as well.

SFCS will offer a six month full-time and a ten-month part time "contemporary" program for a cool $24,500, each.
To compare: the legally challenged California Culinary Academy costs $46,000 for the 12-month program, and Tante Marie's Cooking School costs $22,500. 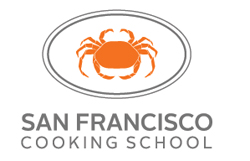 The day-to-day at SFCS will be run by owner, cookbook author and teacher Jodi Liano, and head chef instructor Catherine Pantsios, who owned the defunct Zola's in SF for nine years before moving on to a culinary supervisor position at Ketchum Communications. Both women worked for years at Tante Marie's Cooking School, and the SFCS programs will resemble its program in size and price, allowing a maximum of 14 students at a time. Students will also have the opportunity to extern at all of the restaurants represented by the board. A pastry program will be rolling out in the fall of 2013.

SFCS is accepting applications for its first semester, beginning January 3, 2013. In the meantime, they are building out the former Naan-N-Curry restaurant space (pictured, above), with several kitchen areas for the school, events, and demonstrations.