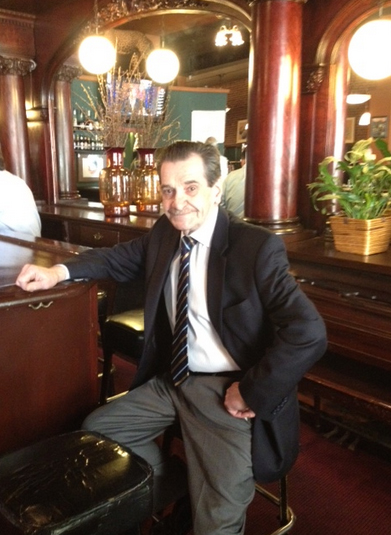 Once upon a time, the restaurant owner was the front of house, before chefs decided to go ahead and take matters into their own hands and tweak the equation. The late Maurice Rouas of Fleur de Lys was a classic example of "the restaurant man." There are fewer nowadays, though you'll still see a good number doing the dance, like John Duggan at Original Joe's or Guillaume Issaverdens at Bouche.

Giovanni Costabile, proprietor of Gio's, is also one such restaurant man. He opened Gio's in the shadow of the TransAmerica Building 25 years ago. These days, you'll see him behind the bar, usually in suit and tie. Or he might be sitting on the other side, having a Tuaca, sipping it slowly—young people don't know how to sip and enjoy, he'll say wryly with a grin, in his signature raspy voice.

We first met when I was snooping around one afternoon for a story. We must've chatted for over an hour, talking about everything from restaurant reviews to the nearby places of yesteryear (Harpoon Louie's, the Blue Fox, Jack's, Ernie's, Vanessi's, and so on; he had a map).

The greatest testament to Giovanni—and Gio's—might be the rest of the people in the bar. In an environment where diners increasingly seem to be chasing the next hot thing, Gio's has true regulars.

You'll go in once for happy hour, and then return, maybe a month later. The same nice lady will be having a glass of white wine while watching the Giants game. Then, just as your eyes come into focus when you walk into a movie theater, you start to recognize another patron, then another, and the waitress from last time. Giovanni knows them all, like any true host should. There's a certain family spirit at Gio's. It crosses all demographics, from the white-haired publisher to the young bartenders en route to their evening shifts nearby. They all come to see Giovanni, and maybe each other.

Mr. Bill—possibly the greatest bartender in the world—will remember your drink order from last time as he rings it up on old fashioned cash register. Or maybe it will be Giovanni's daughter Marina behind the bar.

You will go to Gio's, and Giovanni might tell you a joke— I'm partial to the chihuahua one—or regale you with San Francisco stories. Or maybe you'll quietly sit in the corner and sip your drink and escape from the world for a while. Either way, the most important quality of a good host will ring loudly: You'll be happy.
—Paolo Luchessi
Is there an outstanding server, host, or other front of house person Eater should know about? Send a note to sf@eater.com .