Share All sharing options for: Namu Gaji's David Lee On The Mission Scene 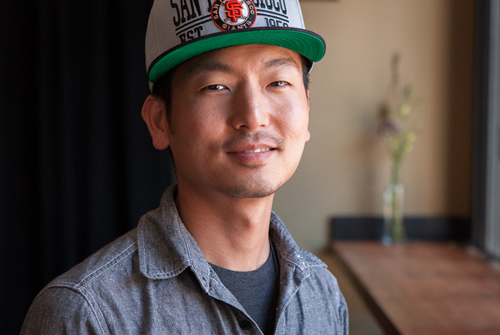 Brothers David, Dennis and Daniel Lee started their Korean food enterprise as a hot-dog cart before opening their much loved Namu in 2006. It's closing last fall was bittersweet: a big loss for the Richmond, coupled with an exciting relocation to the scenester-saturated Mission with Namu Gaji. A testament to chef Dennis Lee's food, the new Namu still attracts old regulars, as well as a swarm of new clientele. Much like neighboring Bi-Rite Creamery, Delfina and Tartine, you can expect quite a wait here. Four months in, Eater talks with David Lee, who keeps the front of house in order on most nights.

7:30 p.m. on a Saturday night, what's the wait for a table? Anywhere from 45 minutes to two hours. With Dolores Park, there are so many different events. If there is a bigger event, we’ll get busy around 7:30 or 8 p.m.

Is there anything I can do to make my wait shorter? There’s so many things going on around here that we do have a text message system [Nosh List], so when people come we’ll take their phone numbers down. It’s pretty convenient. You can just leave, go to a bar, go to 500 Club. Thirty minutes goes by quick when you have a drink and are with some good people.

Do customers attempt to make negotiations in exchange for a table? I haven’t seen that yet. People do name dropping all the time. “Oh I know your brother Dan or Dave. Can you tell Dave I’m here, blah blah blah.” Either way, we seat fairly. We don’t give anyone priority seating unless it’s a media reservation. 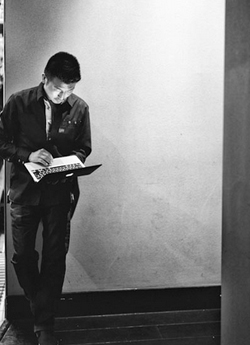 Who are some of your favorite customers? There’s so many. What’s funny is we have so many old regulars from the Balboa location that still come here. Those are some of my favorites. We have Adam Savage from MythBusters. He’s a frequent regular. He’s a great guy, really into food, really nice. We get a lot of chefs. It’s a very industry-driven restaurant. Every night, the staff jokes, it's like VIP night. The Benu staff, Nojo, they come here to eat all the time. The Delfina crew, Bi-Rite they’ll come here to eat. David Kinch from Manresa was in. In the first two weeks of opening, the chef de cuisine at The French Laundry drove here from Yountville just to eat.

Do you do anything special for VIPs or your favorite customers during a long wait for a table? They’ll wait the same amount, but we’ll take care of them. We take care of everybody. Even if you’re a first timer and you’ve been waiting a long time, an hour, we take notice and when you sit down we’ll send an amuse or bubbly. I think it’s great that people are patient to wait an hour to eat your food. It’s very flattering, so we’re going to take care of you and notice that you stuck it out. And usually the people who do end up waiting a long time like that, you end up making friends with them. Our restaurant is very neighborhood-oriented, very friendly. Everyone jokes around and says I should run for mayor because every single person that comes into the restaurant I pretty much know because I’m here all the time and I see them all the time.

What are some differences that you like with this new location?
It’s more accessible, because the Mission and this street is talked about so much that there’s a credibility that comes with being on this street. The clientele are more, I don’t want to say they’re more restaurant-savvy, but they just have higher income. People will come in here and ask for the reserve list and ask for bottles of wine, where on Balboa street that would never happen. It would be once in a blue moon. People say all the time ‘no offense, we loved your old place, but since you guys have moved you’re now a more credible restaurant’ whatever the hell that means. Chef Marcus Samuelsson came in here and I feel like if we were on Balboa Street he would never have come.

What’s your favorite dish on the menu? The buckwheat gnocchi with black garlic. I really like it because it has a lot of texture and a lot of things going on, but it’s still simple. I also really like the beef tongue. It’s very soft and tender. They pickle it for seven days before they grill it. We’re doing a really nice tomato plate right now with a nori vinaigrette. We have a farm in Sunol and I love whenever we use our vegetables because I see the dish from inception.

When you're not here, where do you like to eat? I eat out a lot actually. Have you been to the Korean Garage, Toyose [3814 Noriega Street]? It’s kind of a hidden spot. Me and my brothers, we go there a lot because they are open late. It’s in the Avenues, way out there. You can’t even tell it’s a restaurant. You open the door, walk inside and you fell like you’re in Korea. And they have a little garden in the back so they grow their own vegetables too.
--Chloe Schildhause
David Lee on the computer. [Photo: William Stewart]