After spending about seven months in the kitchen at Nombe, chef Nori Sugie is out. Owner and beverage director Gil Payne writes to say that Brandon Armstrong, who worked with The Michael Mina Restaurant Group for roughly three years as a sous chef, has quietly been filling the executive chef role since the early part of July. Sugie left for a vacation in Japan around that time, and as far as Payne can gather, he is still there.

Naturally, this means changes to the menu, and Armstrong has had some practice with Japanese flavors at Michael Mina. He's currently working with co-owner Mari Takahashi to lead the menu more in the direction of small plates or "Japanese tapas," and away from the emphasis on ramen brought on by the ramen-obsessed Sugie. 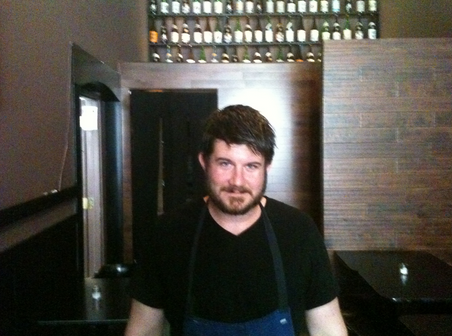 Several of Armstrong's dishes are already on Nombe's menu, including fried pig ears and smoked beef tongue skewers, a new grilled pork cheeks dish, and a Kanpachi crudo. Most of these options are now included in the 7-course, $39.95 kaiseki menu, available nightly with drink parings for an additional $25. The ramen-centric lunch has been scrapped, although three options (tonkotsu, tantanmen, and a seasonal special) are still a part of the regular dinner menu.

As the kitchen shifts focus, Payne is lessening the carbon footprint of the beverage list by emphasizing local beers and wines that pair well to the food. Local sommeliers Mark Bright and Rajat Parr have helped him build out a list of about 30 local wines, and there are now six local beers on tap, including Pacific Brew Labs' hibiscus saison, Almanac's seasonal beer, and brews from Lucky Hand and Magnolia. Payne will continue to offer an extensive and interesting collection of rare Japanese sake, but with so much talk and fuss about locally brewed beers these days, it makes sense to ride the wave.