1) Russian Hill: Biondivino spinoff winebar Et Al. is about a week or two away from opening. An Eater tipster got a sneak peek of the interior, noting a "gorgeous and very Parisian chic [decor] with lots of moulding and a showstopper wine glass chandelier." Tablehopper has more decor and menu details. [EaterWire, Tablehopper]

2) Lower Haight: Fun times at the former Rotee space as word spreads that the chefs from Broken Record, James Moisey and Shane LaValley, will be bringing the same beloved menu to a new restaurant here. It will be called Ricky Bobby, after everyone's favorite guy from Talladega Nights, and they hope to open in late fall. [ISSF] 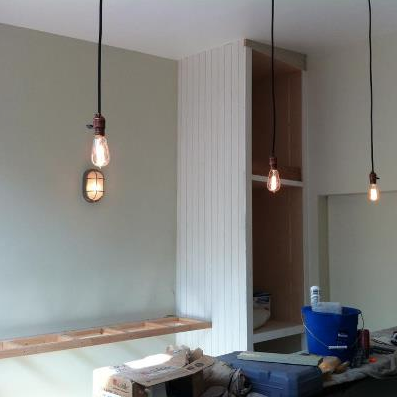 6) Napa: A Southern bistro called The Pear is looking to enter the shuttered space formerly known as Tyler Florence's Rotisserie & Wine. This one is expected before year's end. [NVR]

7) Santa Rosa: After an initial Boudain Bakery design draw was called "hokey" and "corporate" by the Santa Rosa Design Review board, a revamped plan was approved and ground broke recently at Montgomery Village. [Press Dem]

9) San Jose: Freebirds a.k.a. "the burrito [spot] that put UC Santa Barbara on the foodie map" will be opening at 1205 The Alameda on October 2. [The Merc]

See any Plywood in your neck of the woods? Drop a line to sf@eater.com.