Traci Des Jardins has bought out Pat Kuleto's share of their partnership at Jardiniere. Over fifteen years ago, chef Des Jardins and designer Kuleto opened the restaurant in (then un-trendy) Hayes Valley. Since then, the neighborhood has changed dramatically, and Des Jardins has gone on to numerous career highlights, including two James Beard Awards, beating Mario Batali on Iron Chef America, and opening Mijita, Public House, and Manzanita at the Ritz-Carlton in Tahoe. As Des Jardins puts it, " I started out as just a chef, and now I am a business person."

Now, since big acquisitions like Des Jardins' usually mean change is on the way, Eater caught up with Jardiniere's new sole owner last night to ask the necessary questions. 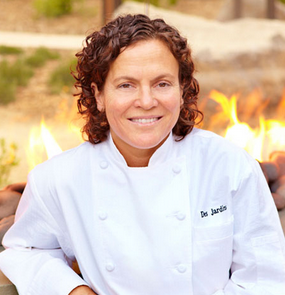 How long have the wheels been turning on this deal? It's been an ongoing conversation. It's been my lifelong dream to own a restaurant that's 100% reflective of who I am.

What does this mean for Jardiniere? It's been a great experience working with Pat. As a famous designer, he was a big part of the design, and a huge presence here. I'm looking forward to running the restaurant based on my own sensibilities.

Does this mean you'll be making design tweaks? Evolution is the key word. I'm not going to tear the place down. It's amazing that we've stayed busy through all these years and, as a business owner, I have to be sensitive to our loyal fans and be careful not to change the things that people love.

How about the menu? Any changes in store there? This is no reflection on Pat, but I have felt things can be a little dated. I want to make everything more contemporary. I've always said evolve or die.

Any examples? Well portion sizes for example. Fifteen years ago our plates were huge. Now diners realize they shouldn't be eating that much food, and they're more health conscious. The French have always eaten smaller portions, and Americans have slowly adapted to desire that.

What else is on the docket for Traci Des Jardins? Well, I am always looking for new locations. I want to open more Mijitas at some point. Nothing imminent, but it's always on my mind.