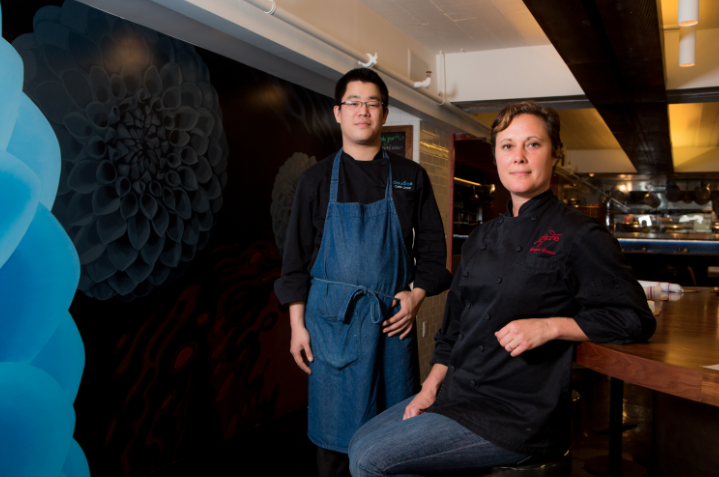 French Restaurateur Franck LeClerc spun off Claudine a year ago with the intention of creating a light-hearted take-out companion cafe for his Claude Lane heavy-hitters, Gitane and Café Claude. Soon after the artfully muraled space began life downtown, its ancillary tables became the main affair, and Claudine morphed into a sit-down restaurant in its own right. Batson brought on Caleb Jones as chef de cuisine, Bauer gave them three stars for food, and an obsession for their meatball, kale and fregola soup developed on the streets. Eater recently met with Batson and Jones to speak about Claudine's early transformations and big plans for the year to come.

One year in, did Claudine turn out how you expected?

Bridget Batson: We've had lots of changes. It started with that little cabinet over there [up front] which was all takeout food. Sandwiches, salads, homemade juices, iced tea, stuff like that. That did not take off...at all [laughs]. We were really hoping it would, but yeah, didn't work out. Global local was another focus. We were using local ingredients, but food with some Japanese flair here, and now the food is influenced by Caleb's California French [style].

Caleb Jones: We felt it would be better for us to have a concentrated cuisine. It was after a month or so that it shifted to us just strictly with local California and seasonal produce.

BB: And as much as we hate to admit it, we actually do listen to Yelpers [laugh]. We always read Yelp, and if you read something more than once or twice and there always seems to be sort of a theme, then we start changing things. We wanted to give what the public wants.

CJ: And it was sort of confusing in the beginning to know what their expectations were. They didn't know what to expect, especially with the food, so we just streamlined it to make it more approachable.

Were you surprised that the original concept was not taking off?

BB: Yes, very. I think [Caleb] was probably less surprised than me.

CJ: For me, in the beginning, on the outside looking in, we really didn't seem like a to-go kind of place. It seemed like it was more of a restaurant. So it was not a surprise to me.

BB: And in the beginning, before Caleb came on board, we had already started planning the to-go stuff and had almost all the packaging and everything ready to go and all cute and bundled up. And it didn't go.

CJ: It didn't really sell at all. I guess that was the biggest push.

Do you think it had to do with where you are, the neighborhood?

BB: I think people can get enough of that here, so they didn't want it. There are so many sandwiches and quick fixes around here designed to go really fast. They seemed to want more of a meal, a dining experience, which Caleb gave them.

What other adjustments did you make from early feedback you were reading?

BB: There were some items that people weren't super excited about. I can't remember specifically what they are to be honest with you. I know the meatball soup will never, ever leave because that's what they love. We attempted it once and there was a small outrage. We will not do that anymore. There are definitely things you can put on and some things you can take off because there not selling like we thought they would.

CJ: Because the menu changes so much, at least now there is more expectation that if someone comes in they might not be able to get exactly what they got last time. But things like the s'more as well, people expect that. Certain dishes like that don't really have seasons, so they can stay on.

So meatball soup, s'mores, anything else that will never be removed from the menu?

CJ: I removed it for a little bit, but people wanted it. Chicken liver mousse, which is now duck liver mousse, that has stayed on the whole time.

BB: The crudo is super popular, but Caleb has changed the protein with that. The fish changes often, but it's popular.

What do you think of the clientele?

CJ: Mostly business people during the day. Business lunches, and longer business lunches. You'll see people come in and stay for at least an hour. Dinner time, it sort of varies. A lot of times, like last night, there were a lot of tourists. I don't get the sense that there are a lot of local, regular customers, just because of the area. We are also busier during the week than the weekends. Nobody is down here on weekends. Thursday is our busiest night.

BB: Café Claude has a tendency to hog all the business. He's selfish [laughs].

When critics come in, like when Michael Bauer visited, did you know he was here?

BB: We feel like he was in disguise, and we debated whether or not it was him.

CJ: The first time he came in, we didn't believe it was him. But there were some clues that gave it away.

BB: We had to do some detective work. We put flowers out for Valentine's day, and we had never put flowers out. There was a little glass with a stem in it in one of the pictures [from his blog]. So we knew.

CJ: He put it on his blog three days later and I knew because no one sits at the back bar, so I knew one person sat back there and had chicken.

BB: So the flower, against the blue. Dead give away. We knew it was that guy. He looked familiar the next couple times he came in.

How did it feel to read such a great review from him?

CJ: Definitely rewarding. It was March and we had morphed a considerable amount by that time from what the original concept was. So it was reassuring for me that we were on the right track and in the right direction. But we had one review from Patricia Unterman...

BB: That gave us a smack, a wake up. It was like, okay we're doing this wrong and we need to fix this, this and this.

Based on her review, what did you tweak?

CJ: We were having issues with consistency, and some issues with basic execution, so we addressed those.

How did you two meet?

CJ: There was a sous chef that was working with Bridget at the time, who I had worked with a few years before. So she contacted me telling me about this opportunity here.

BB: And he had just the right touch. Not too heavy handed. Light, fresh. He nailed his tasting. We always talk about this, that a lot of the reasons chefs fail is because they fail to understand what they're dealing with with the kitchen as a whole, and what people want, and what they are capable of. I could never imagine this being heavy food, cumbersome food coming out of this kitchen. It would feel wrong. It wouldn't match what we are trying to do, how the environment feels. That's why chefs fail. Not sensing what's going on around them and just doing what they think is best. They do a good job of putting their ego out, let's put it that way.

CJ: The kitchen is a very limited kitchen. I wouldn't consider it a full kitchen in terms of its fire power because it's electric. It doesn't necessarily have everything a chef would expect to have. I definitely had to try fitting a lighter style within that kitchen, but still have enough substance to the menu so that it felt like a full menu. I would definitely agree that it was about fitting the space, and the space is more feminine. Sixty percent of our lunch crowd is women.

What are some of your favorite dishes?

BB: I like [Caleb's] soup, I bet you're so tired of hearing that. The lamb belly with the beet glaze. That's one of my favorites too. Gnocchi too.

CJ: Yeah, I don't really have a favorite. Sometimes I'm looking back trying to remember different things we did. I remember half or so [laughs]. It's all a blur. I can't believe I've been working here a year.

Were you expecting the soup to be such a hit?

CJ: No. And we were selling so much of it. Even in the summer.

What are the top sellers?

CJ: That's the one. By far and away, the soup sells the most every single week. We probably sell 500 bowls of soup a week. Or more [laughs].

What are some plans for the next year?

CJ: Maintaining. Not in the sense of just treading water, but keeping the high standards that we've tried to reach in the last year. It's more about moving on and refining what we're doing.

BB: It's also important for us to remain reasonably priced. To be approachable.
--Chloe Schildhause