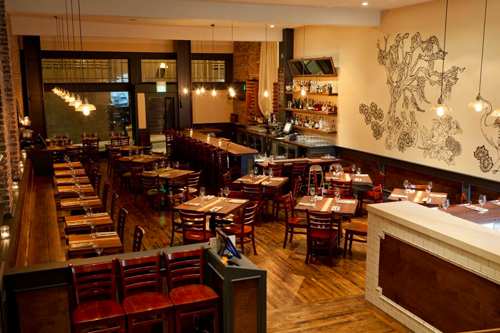 Two years ago, three friends from Ocala, Florida started to work on creating a restaurant in an old building in Union Square. They aimed to celebrate their southeastern roots while utilizing northern California's bounty of ingredients in their food and drinks. Hops & Hominy opened its doors last January and has been serving southern-fried favorites to San Franciscans ever since. We caught up with two of the owners, Adam Edwards and David Baeli, to see how their first year in business went and find out what's next for the boys from Ocala.

How did your first year year go as far as what you expected, and how it actually went?
Adam Edwards: I think there was a lot of changes when we initially came into the building. We really thought we'd be dominating a lunch-style business when we first opened and we quickly realized that we could really capitalize on the evenings and the happy hour business, which is where we're at right now. We're really thrilled with the progress we've made this year. We're learning a lot. It's definitely our first restaurant in this city and it's taken us this year to really learn the clientele of San Francisco and to really establish guest relations with the great people of the city.

Were there any big surprises, good or bad?
AE: I think with any small business there are always going to be some surprises and things you don't expect to pop up, and that's what really makes us grow as a restaurant. I think that those challenges that popped up along the way, there's really countless numbers, it was all learning experiences and I think it's really going to change us and make us better in the coming years.

DB: I feel there were also some really great positive surprises. We entered this endeavor here in Union Square, and we had assumed that most of our business would be tourist-based, would be people passing through the city. It turned out though that after a few months it really gained a following of a lot of locals, a lot of people working in local businesses, a lot of people that live nearby, a lot of people that travel from pretty far in the city just to come see us. So that was definitely a pleasant surprise.

AE: Yeah, definitely something we wanted to do was to be a destination restaurant and not to just be a stop along people's travels, so the fact that, you know, living in the city people tend to eat in their own respective neighborhoods, and the fact that we're getting people from the Sunset, from the Richmond district, and all over the city just really makes us happy with what we're doing with our overall product.

Speaking of locals and tourists, you guys are all from Florida. Do you consider this a home now, sort of a home-away-from-home, or do you consider this your home-home?
DB: Oh, yeah. I mean, after being here for two years and really getting to know a lot of people that live here in the city, establishing a good base of friends including a lot of our employees, I know I consider this home. You know, I've got family scattered throughout the country, but I'm very proud to call San Francisco home now.

AE: Yeah, we've been here for the last two years because we came out here the year prior to that just to kind of get the space and we basically had our hands on it, building it ourselves. So we've been here for a couple years now and it's just amazing how adaptable this city is, how much everyone's really helped us out and made us feel welcome in the community down in the financial district.

You guys got a lot of buzz initially and continuously about your bacon-infused bourbon. Did you expect that to be so popular, or was that one of the surprises?
AE: You know, I always knew that it was a great drink. We're not the first ones to tackle bacon in cocktails, of course, so it's something we knew that would really work out, it kind of fit the southern theme, but the great thing about that cocktail is that it's really opened up our cocktail list to other people, had them try the different things we've put it on. It's constantly changing but we'll probably always have that bacon bourbon on the cocktail list in some way, shape, or form. We've gone from Old Fashioneds to Manhattans to our drink, Pork Chops and Applesauce, so it kind of always bounces around and it has to do with the seasonal ingredients that we can get and whatever we're playing with behind the bar.

Do you have any evolutions in mind for the next year, or any sort of changes that you're planning on making?
AE: I think that Hops & Hominy is a constantly evolving restaurant and if you look at Dave's menu items, and what I'm doing with the cocktail list, it moves around pretty much seasonally. And we're still learning, we're still here having a good time, so it's definitely innovative here and we like to try new things. So there's always going to be new stuff. I wouldn't say that we're going to be in a stagnant spot. But we really love what we're doing and we don't want to change everything at the same time. So it's just a constant battle with that.

As far as reviews go, do you read them, or do you totally ignore them?
DB: Well, I'm happy to answer this question. You know, in the beginning we did find ourselves in a few articles here and there across the board about new openings and for the most part as far as professionally written reviews, I think we've stayed out of most reviews and articles. Which for us was okay, we didn't mind being out of them for the first year, while we really established ourselves, made sure that we were putting some procedures into place and what not. So now I think that as we're moving forward confidently, now we'd be happy to get the reviews like that. But as far as peer reviews or consumer reviews, such as Yelp and Open Table and what not, I think we've been treated pretty well by a lot of our customers. A lot of people have been happy to focus on a lot of the good things that have happened. You know, there are certain things with some of these peer review-style websites where it's a money-making thing for their company. We get a lot of very biased reviews, it seems like, from some people but it's good to have that, I guess, to keep us in check. Personally, I don't read those unless somebody brings it up to me, in which case I'll take a peek and see what they had to say. But as far as my day-to-day practice here at Hops & Hominy, no, I usually don't pay too much attention to those Yelp reviews. Although, you know, from a front-of-house perspective Adam and Dan do keep an eye on that, to see how service and stuff is going. But I do a lot of my personal R&D by going around and talking to a lot of tables and really trying to get some honest feedback on the spot about different dishes that we're rolling out or different things that we're trying. And you know, I do get a lot of feedback from the guests about the service as well when I walk around and talk to tables. So that's one of my favorite parts of each night, is really getting out there and talking to all the people that are in the restaurant. For me, that is what I consider to be reviews by our consumers. I try to stay away from a lot of the Yelp reviews.

AE: Yeah, unfortunately I've got a little disease where I check those websites pretty much daily. In the beginning I let myself get worked up over small things, then I started to realize that it's really your overall score across the board, and on both Open Table and Yelp I think we're at 4 stars right now, which makes us fairly happy. We always have room for improvement and we definitely want to keep moving up. The main things I pay attention to are service issues, making sure my staff is doing the right thing. We know how the product's being prepared. All three of the owners are in here every day. You'll find me making drinks, Dave making food and Dan walking around making sure everything's okay. So I personally know what's going on in the restaurant. I know when there's a problem. We're always going to be hands-on owners, that's just how we are. We're hard-working and that's how we were brought up in Florida.

You guys seem to be doing well. You happy?
AE: Yeah. Couldn't be happier. I mean, we're in a restaurant in downtown San Francisco, things couldn't be going better.