Share All sharing options for: Miller And Roth Double-Team Capo's, Love It

Kicking off this week's review party: dueling reviews of Capo's in North Beach. 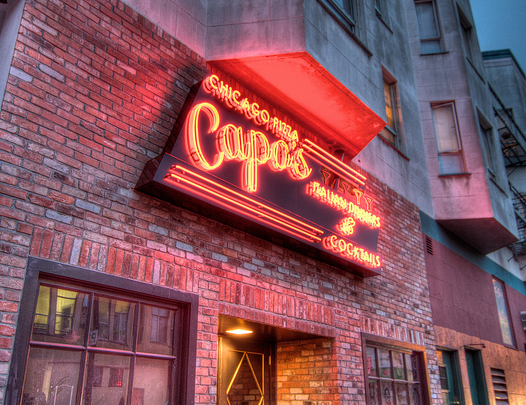 Capo's. [Photo: Flickr/Jeffcaz]
Last week, Anna Roth filed on Tony Gemignani's new Chicago-style restaurant Capo's, deciding that "your experience at Capo's depends more on the style of pizza you choose than the toppings". Beyond pizza, offerings include a "superb dish of baked shells topped with a generous amount of Dungeness crab," and a "wonderful pasta e fagioli." She notes that "the design is retro without going full Disneyland," and the final verdict on the pies is good: "All combine to create a bite that is dense, rich, and savory, punctuated with the bright, fresh tomato sauce baked on top."

Yesterday, Virginia Miller followed up with her Capo's review, describing the Calabrese sausage as "dreamy" and getting into great detail on the signature dish of quatro forni: "like a glorified garlic bread, or as a waitress described it, doughnut, puffed bread is cooked four times in different ovens, doused in tomato sauce, mozzarella, garlic."

While Roth said that, "cheese and sauce take the spotlight" on the pizzas, Miller counters that "Meat blissfully dominates most pies, whether folds of Italian beef, thinly shaved in authentic Chi-town fashion, or house Calabrese, fennel, or Italian sausages." Like Roth, she closes on a high note: "If I seem to be gushing, perhaps I am. Visiting three times in the first month alone, I've sampled almost every listed pizza and cocktail. Some new openings are exciting, fresh, visionary. A spare few respect the past, even perfect it." [Guardian]

When Cafe Fanny closed last spring San Francisco's dining scene took a huge hit. According to Cynthia Salaysay of Eastbayexpress.com, the restaurant brave enough to attempt filling those shoes is doing a more than admirable job. She writes that "Bartavelle, a coffee and wine bar named for a French songbird, is the courageous new business in the old, venerable nest. And I'm happy it's there, chirping like all get-out." As far as the food goes, she was particularly taken by boards of meats, cheeses and pickles describing them as "a still-life study in contrasts — a sweet smoked trout and a creamy dollop of white bean purée, for example, are balanced by a couple of spears of delicately pickled baby carrot and the crisp bite of fresh radish." She does warn, however that there is a "fine line between cozy and cramped" and that Bartavelle sometimes verges on the latter. [East Bay Express]

The Bauer Power Hour revisited old standby Bistro Aix, finding some aspects of the meal disappointing. His chicory salad was "undersalted," and the tarte tatin "could have used extra time in the oven to brown the pastry." Entree-wise, the tenderloin skewers "needed a boost of marinade to add interest" and the French fries that accompanied them were "mostly small end pieces". The service was "disjointed" and the staff seemed "taxed". Somehow, Aix pulls off two and a half stars, even though Bauer left "feeling a little bit down". [SF Gate]

THE ELSEWHERE: Merc loved the ribs at Slowhand; Marin IJ says Cafe Verde is a good place to linger; SF Gate reccomends the albondigas at Gallardos, and has a 2.5 star review of Belli Osteria in Berkeley.