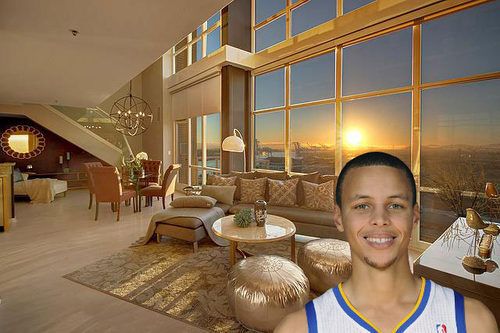 OAKLAND—The Golden State Warriors' Stephen Curry and wife Ayesha are selling their penthouse loft at the Ellington in Jack London Square for $1.695M.

SAN FRANCISCO— Looking to drop eight figures on an abode? Here are the ten most expensive residences for sale in the city.

MID-MARKET— The American Conservatory Theater celebrated breaking ground on their revival of Market Street's Strand Theater, and we were on the scene.

SOUTH BEACH— What does $5.55M get you at the Millennium Tower? His and her bathrooms in the master suite, at least.

HAYES VALLEY— The condos at Linea in Hayes Valley have just been released onto the market. This way for floor plans, pricing, renderings and more.

THE MISSION— A major flip on Capp Street is seeking $3.6M. Will it get asking?

SAN FRANCISCO— Here's what around $3,500 a month will rent you around the city.

NOB HILL— A very fancy condo at the Francesca is up for grabs at $2.575M. Do take note that the interiors were designed by San Francisco socialite (and interior designer) Ann Getty.