Share All sharing options for: The Wine & Spirits Top 100 Tasting

And now, Eater contributor and Hip Tastes sommelier Courtney Cochran returns with another boozy installment of The Swill. 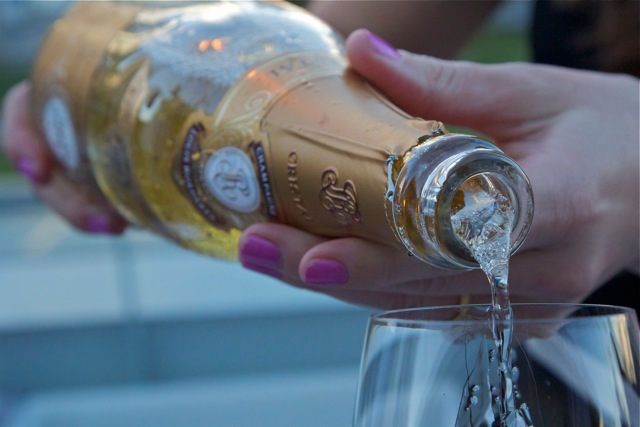 1) Bubbling Personalities: Eccentric industry favorite Lawrence Sterling of Iron Horse Vineyards summarized the 2013 harvest —just recently wrapped in wine country—by gesturing to the impressive gourd selection at his table. "If the gourds look good, so do the grapes," he noted. Meanwhile, his fresh-faced daughter Barrie Sterling quizzed Louis Roederer reps on the amount of dosage in their bottles of 2005 Cristal. Nothing like a cool California sparkling wine family schooling an O.G. Champs house! Speaking of Cristal, it was once again located adjacent to the teams shucking Hog Island oysters, delighting attendees.

2) Reality TV-Wine Spoiler: I got a not-so-subtle tip about a soon-to-launch wine made in partnership with a popular reality TV series: While the pop culture-vino mashup isn't quite as titillating as last year's Bachelor episodes starring winemaker Ben Flajnik (remember "Loincloths and Sauvignon Rhymes" and "'Wine' from Table Grapes"?) it should register some hits on the wine-biz buzz-o-meter. Watch for the launch later this month.

3) Washington Syrah Steals the Spotlight: Wine Australia maven Mark Davidson, whose organization's MO is to upgrade our perception of wines from Down Under, poured a selection of solid entries from throughout the country. He then pointed me in the direction of newcomer Gramercy Cellars, where Assistant Winemaker Brandon Moss poured some of the evening's most memorable wine. Moss assists Master Sommelier and founder Greg Harrington in the enterprise, known for producing some of the nation's best cool-climate, cuisine-ready reds.

The Gramercy pours on offer channeled the Rhône Valley's vinous hits: A 2010 Columbia Valley Lagniappe Syrah offered complex notes driven by cranberry and poppyseed, while a 2010 Walla Walla Valley John Lewis Syrah rocked dark fruit driven by a smoky, meaty backbone. Try them, but note that the John Lewis may be hard to find: only 100 or so cases were made.

4) Of Literary Note: Burgundian showman Jean-Charles Boisset–lately married to Gina Gallo and throwing lavish parties at his Raymond Vineyards in Napa –dropped the news that he's hired octegenarian oenoscribe Charles Sullivan to write the definitive history of Buena Vista Winery (another outpost in Boisset's growing vinous empire). The book by Sullivan, known for his beloved A Companion to California Wine, comes out in five weeks.

5) Digitally Say "This One's On Me!": Gilt Wine's founding beverage captain Jeff Meisel breathlessly announced that he's become an advisor to Drinkboard, which allows you to digitally gift a drink to friends who are out on the town. The app joins the likes of Plumfare, which was recently acquired by Groupon, in the digital dining-drinking-gifting space, making it easier to say "this round's on me" from wherever you are.

6) Mountains of Cheese: There were more than just mountains of good cheese on offer from Point Reyes Farmstead Cheese Co. this year: there was also much talk of The Fork, the Giacomini family's new education and entertainment center in Point Reyes Station. Offering farm tours, hands-on and demo-style culinary classes, monthly farm dinners and an edible garden, The Fork is officially open for various occasions, including private events.

7) A Grab Bag of Hits: As ever, the event is a great chance to sample old favorites and discover new ones. Among many I enjoyed, Dr. Loosen, Adelsheim, Shafer, DDO, Lioco and Hirsch showed as well as ever (Lioco especially rocked my world with a 2011 Sonoma Coast Hirsch Vineyard Pinot Noir), while new favorites emerged in Errazuriz (the 2012 Single Vineyard Aconcagua Costa Sauvignon Blanc beautifully channeled Sancerre), Bindi (whose 2011 Victoria "Composition" Chardonnay managed to be at once boldly oaky and blithely acidic, go figure) and Quinta de Foz de Arouce, whose 2008 Beiras white Sercial improbably married roasted lemon peel, floral notes and a cheesy nuttiness to fabulous effect.

8) Looking Good: SOMM star DLynn Proctor, ever dapper, won high marks as the most sartorially savvy oenophile of the evening.

All said, it was a whirlwind tour of a hundred great wines and a year's worth of industry catch-up. As the evening wrapped up and final pours were being offered, I spied another sartorial highlight: Calera Wine Company founder Josh Jensen working the room in a bright-red leather biker jacket. The striking Oxford-educated oenophile's statement piece sounded just the right metaphor for the evening's pours: elegant and bold. Cheers to that—and congrats to W&S on the 10th anniversary of the Top 100 event!