Eater's Cocktail Week 2013 is underway, and with it comes a weeklong feature spotlighting some of San Francisco's most stellar drink-slingers. Ladies, leave your man at home: today's craft cocktail outposts are full of female bartending talent, and this week we're celebrating with five top ladies of liquor. First up, we talk Sazeracs, Fireball, and bad bar etiquette with Alicia Walton of Brass Tacks.

How did you get interested in cocktails? I've been working in the service industry since I was 16, so pretty much all of my life. But mainly San Francisco opened that world up to me. I moved here in 2002, and I started working at bars, one of them being Martuni's, which at that time was kind of ahead of its time with the cocktail trend. And I really enjoyed making all these fun drinks for people. They're not drinks I would make now, but I loved it then. I was there for about six years. Then when I started working at Elixir in the Mission, H. Ehrmann took me under his wing and really opened up that world for me.

Do you remember the first cocktail that you got excited about? When I worked at my old bar in West Virginia, I made a lot of classic cocktails: martinis, Manhattans, old-fashioneds, because I worked at this little Italian place and they loved those drinks. And then fast-forward twelve years, and here we are making all those classic cocktails again. So I think I started having a love for that. I've always tried to be minimalistic with cocktails. Everyone's putting all these ingredients in, but you can just pick up three or four bottles and simply it and make an interesting cocktail. The first drink that really brought me into cocktails? I don't know ... maybe a Sazerac. Those are my favorite to drink, for sure. I rang in my 30th birthday with like ten of those.

What do you think about the revival of the classic cocktail? I love it. I think it's so awesome. You can also do a lot of twists on the classics, so it opens up doors to these drinks that people were making before we had things like a lot of ice or fresh juices. They were using whatever was available at that time. If you had ice, you were rich.

So why is a Sazerac your favorite cocktail? Well, I only order them at certain places, where I know that my friends make them perfectly. I just like that it's a really simple drink that brings all of these flavors together and meshes them into this magic. So you have the taste of the rye and of the anise, and a little bit of lemon zest. But it's also a really easy drink to mess up. I've so many bad Sazeracs, so I think whenever you have a good one it's special. And it can get a little warm and still be the most delicious drink.

I won't make you name where you've had bad Sazeracs, but were are your places to get good ones? I always get a Sazerac from my friend Lindsey Baird. She works here and at Comstock Saloon, and she makes the best Sazeracs in the city. She's magical.

What do you think are some overrated trends or ingredients right now? I mean, of course I don't really want to have some bubblegum liqueur in my drink, but San Francisco is so cultured in its cocktail movement that everyone is doing really spot-on drinks. I guess just doing too much in a drink, maybe putting too many things in there so that they don't really jive. But it's hard for me to say 'Ugh, I don't want to drink anything with Hpnotiq in it.' No one makes anything with Hpnotiq in it, because that's not what we do here!

Speaking of which, we've heard that behind closed doors, bartenders will take shots of Fireball. Is there truth to that? We're making our own Fireball here, actually! So many people ask for it. I was just having this conversation with a fellow bartender last night, and he was like, 'I just took my first shot of Fireball, and you know what?' And I said, 'You kinda liked it, didn't you?' And he did! The only place I drink Fireball is on the mountain in Tahoe. Because it's warming ... and no one will see me there.

What a thing that you feel like is sort of underrated on the scene right now? Women [laughs]. I don't know ... I'm not someone that's against spirits. Like I don't look at someone sideways if they order vodka, like I feel like a lot of bartenders have that perception of, 'Oh, if you're not drinking gin, or rum, or whiskey or tequila ...' I think in this whole cocktail culture vodka is sort of the odd man out because it's so neutral. And that's why people drink it, because they want that neutrality. And I get that. I love the taste of whiskey so I'm going to drink whiskey. But I think if you like a Kettle soda you like a Kettle soda. Everyone's entitled to have their own taste.

The word 'mixologist' gets thrown around. What do you think of that word? Oh, I'm so glad you asked that. 'Mixologist' is definitely is a word that we've had around for a very long time. It's really been picked up recently, and sure, I think there are mixologists out there. But I think it's a little silly that you have all these kids that are kind of new on the scene who couldn't pour without a jigger to save their life, and then they're 'master mixologists'? I've been doing this since 1996 and I call myself a bartender. And if you want to call me something fancy then I'll be a 'cocktologist.' What I think is the real definition of a mixologist is someone who enjoys designing cocktails. But I think it kind of narrows down what we're supposed to be doing as bartenders. I'm a bartender: I can make you a drink, and I can talk to you at the same time, and I can tell that person to get out of my bar because they don't have any shoes on, and I can ask my bar back for ice, and I can give the dog a Milk-Bone at the same time. That's part of bartending too, being able to juggle all this stuff. 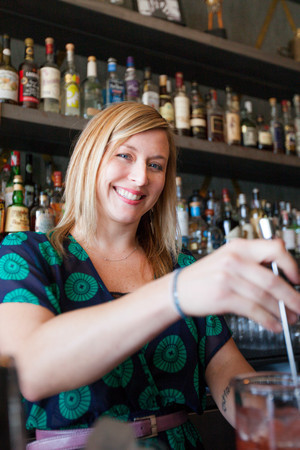 Was there ever a moment when you sort of considered whether you wanted to be doing something else? Yes, definitely. In 2005 I went back to school and I had my whole game plan that I was going to be a marine zoologist, and I was going to dive every day to do research. I went to school every semester, spring summer fall, for two and a half years, and I was like ... why am I so eager to get out of this job? I started working for H. in 2008 and began to realize that you could be a bar owner and be really happy. And it inspired me to own my own place, and that's what I'm moving towards now.

What for you is a really good day on the job? Having a lot of customers smile, a lot of jokes. We do a lot of laughing behind this bar. The people that you work with and the people that you serve really make this job what it is. At the end of the day, interaction with someone else is what makes your day.

What's your idea of bad etiquette at a bar? Don't ever whistle at your bartender. Don't clap and whistle. We're not golden retrievers, we're people. People do that all the time. It's also the environment too, maybe it's the weekend. When people do that wave thing, I just wave back at them. And then people get drunk, which doesn't help. I mean, I was raised by wolves and I still have a little etiquette!

What about things that people do that's really nice? 'Hi, how are you doing?' So many people don't ask you how you're doing. I usually greet everyone ... 'Hey, how's it going?' 'Bud Lite!' Okay, cool. So when you're having one of those nights when you're just in the trenches, and someone comes up to you and asks how you're doing, that's a really nice thing. That little bit of interaction prior to what you need or what I can get for you.

From your perspective, what's it like to be a woman in the industry? There are not as many of you as there are men. In San Francisco we're so blessed, because we do have so many awesome female bartenders and bar managers. But I can assume that it's not the same in other cities across the country. Here we're all just kind of in it to win it. A lot of girls go on to become brand ambassadors, so we lose them behind the stick a little bit, but I can think of so many awesome women out there. We have a pretty solid group of chicks. The whole community sticks together, and I don't think there's a lot of dudes in this industry that are like 'Ugh, look at that girl trying to do it,' because they know that there are so many women just killing it out there.

What are you favorite spots in the city to go to, as a civilian? Well, since this place opened I've been spending a lot of time here. I like to go to Brass Tacks! But I love me some Bender's, I'm a big dive bar kind of gal. If I want a good cocktail, I like to go to Comstock. I worked there when it opened and it's a beautiful bar. I always love going to 15 Romolo to see friends that work there and have a great cocktail. I like to sneak off to the Brazen Head in the Marina, just because I can have a steak and a bottle of wine at one o'clock in the morning with my boy. It's old-school, it's dark red, the lights are low. It has that romanticism.

What is your dream place that you would open? My dream place would be a neighborhood bar, that anyone can come into and get the drink that they want. If you want a cocktail, you'd get one of the best cocktails you've ever had. But not over-the-top and crazy. I want consistency because I think that's what really makes a bar thrive. And depending on your neighborhood, you build around the people that are there and you make it comfortable for everyone. That's what it boils down to at the end of the day. A common place. All these people don't want to be in each other's living rooms, but they can all be together in my living room.