As the unstoppable juggernaut of Cocktail Week 2013 continues, we add a fourth female bartender to our Ladies of Liquor series: Jennifer Russick of Michael Mina, who chatted with Eater about favorite bars, drinking green Chartreuse neat, and why FiDi customers should consider being a little nicer.

How did you initially get interested in cocktails? That probably happened when I moved to San Francisco. I'd been a bartender for a long time, and I always thought bartenders were cool, but in the city there was a different kind of cocktail culture. That was probably seven years ago. I worked at Town Hall, and I worked at the Moss Room where we had small boutique-y spirits. We would only have a couple gins, a couple bourbons. It was really tiny there, and we had a really cool cocktail program. Then I started at Michael Mina about three years ago.

Did you have a specific lightbulb moment? It was probably at Alembic. That, for me, was kind of like the beginning of this whole cocktail culture thing. I lived down the street, and I was like 'Oh man, this place is so cool.' The drinks that we put out now have a similar style, but before that I had never seen any drink besides a cosmo and a lemon drop. Like, what's this tincture? I think they had a Bee's Knees, they would do stuff with cucumber water. That was one of the first places that I ever went to ? everything they did was very methodical, and it just seemed different at the time.

What's your personal favorite cocktail? Well, I'm super-simple when I go out. I love looking at people's cocktail lists, but usually I'm a green Chartreuse neat, or a bourbon neat, kind of person. I'm super simple. If something strikes me on someone's list, I'll order it, but I usually just go straight for the neat stuff.

Any opposition to the word 'mixologist?' I think it's silly. I just try to humble it down and say, you know, I'm just a bartender. But I don't even really know what the definition of mixologist is. I mean, we mix more stuff that we make ourselves now, we're making syrups now. It doesn't make me feel uncomfortable, but I'd rather just be called a bartender.

Any new trends on the cocktail scene? People are making a lot of their own liqueurs. I know this one woman who's making her own version of green Chartreuse. People are infusing plain spirits, and making their own gin and nocino, whereas a few years ago, it seemed like more syrups. I know in Oakland, at Boot and Shoe Service, they make a lot of their own liqueurs. I'm really interested in making my own tonic syrups, to just add club soda to, but I'm finding it really hard to get ahold of some of the botanicals and herbs that I'd need. We do have an apricot cordial that one of our bartenders made: it's straight-up apricots and plain spirit. I just made a spiced-fig syrup with winter spices like star anise, clove, black pepper, things like that, and I make a spiced-pear syrup that goes really well with bourbon. I like to go to the farmer's markets and see what's good.

How has it been to be a woman behind the bar? I feel like I've always been accepted behind the bar as a woman. I can't really think of any that weren't, but I feel like I always try to be the hardest-working person back there. And a lot of women that I work with are just super-aware, super-honest. They're typically more aware of their surroundings than the men. They're just killin' it more. 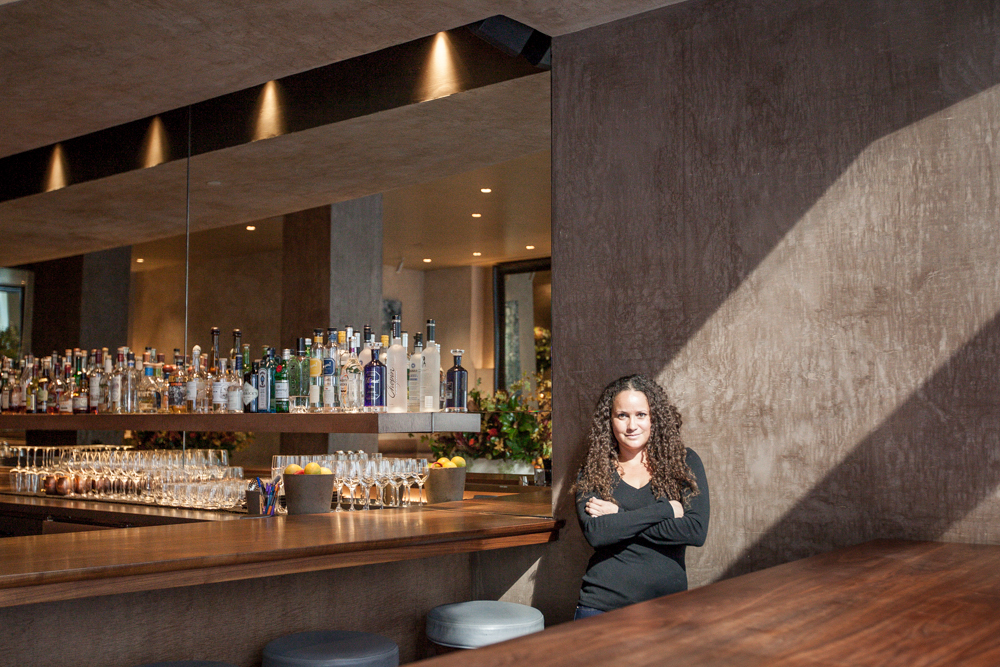 Any bad bar etiquette that just drives you crazy? Working at Michael Mina, you get a lot of it. It drives me insane when you go over to someone and you're being nice, and you put down the cocktail list in the front of them and you say, 'How are you?' and then they just reply with, 'Vodka tonic.' It's like they don't even pay attention to what you've said, they just care about what they want. It drives me insane when I'm making a cocktail and I'm pouring it into a glass, I haven't garnished it yet, and they just grab it. That happens to us all. I try to be nice about it, but I also want them to be aware that it's not ready for them yet.

What's the antithesis of the bad behavior? Sometimes you get people who notice that you're working hard and they give you nice compliments like, 'You're really good at your job.' It's nice to have people who are conscious of other people. You notice that people are aware, and maybe do a little extra. Michael Mina is kind of a different clientele than, say, at Maven. For us, we get a lot of people who are coming for the food, a lot of happy-hour people in the Financial District. They don't want to look at us or talk to us, they just want their vodka martini. But we do sometimes get people who are very nice.

What are your go-to spots for a drink? I don't live in the city anymore, I live in Oakland. When I lived in the Haight, I liked Alembic. For a little nip, there's a bar across the street called Trax. They're so nice in there, and they pour huge shots. I would always have cocktails at Maven, I used to love Beretta. Here I like Hotsy Totsy, it looks super '60s on the outside and like it's going to be a dive bar, but they actually have really good cocktails. I can't leave out 83 Proof. Dive-bar wise, there's Sutter Station. It has an opening on Market and also on Sutter. That's the place you go for a drink when you're waiting for the bus.

Where do you picture yourself in a few years? I feel that while I don't think I'm a career bartender, it's possible that I could be more on the management side of opening up a spot, maybe here in Oakland. I'd like to do a lot more research and see what's going on in the world of cocktails. But I'll definitely be moving forward and staying alert.