It's looking like tomorrow will be opening day for April Bloomfield and Ken Friedman's reimagining of the historic Tosca Café, a project that's been in the works since January. The duo behind NYC's beloved Spotted Pig, The Breslin, and John Dory have been hard at work cleaning up the space, installing a real kitchen, and shaking up the drink offerings, with the help of wine directors Ceri Smith (Biondivino) and Randall Grahm (Bonny Doon), and bar manager Isaac Shumway (Bourbon & Branch). Now, for the first time anywhere, we present Bloomfield's opening food menu, Shumway's cocktail menu, and the wine list from Smith and Grahm.

Bloomfield's food menu, concocted alongside chef de cuisine Josh Even, offers an Italian slant on the approachable pub grub she's become known for in New York. Riffs on Roman classics like bucatini all'amatriciana, gemelli cacio e pepe, and fried artichokes abound, along with some Bay Area-infuenced touches like a Point Reyes blue cheese salad with radicchio and locally raised McFarland Springs trout over broccoli de cicco, anchovies, and rosemary. Bloomfield's signature way with pork is also in abundance, from the smoked pancetta in a mussel soup to a crispy pig tail antipasto to potatoes cooked in pork fat. And we've heard rumblings about some secret off-menu meatballs, too. Here's the full menu (click to blow it up).

Smith and Grahm's wine menu is primarily focused on the classic wines of Tuscany, Piemonte, Liguria, and the Veneto, emphasizing lower-alcohol, food-friendly vintages that call back to the days before the rise of Super Tuscans. A handful of classic and new-school California wines are also available, including white and rosé blends created specifically for Tosca by Kevin Kelley's Natural Process Alliance (NPA) project. Smith is also planning to offer a Chianti in a fiasco (the classic straw-wrapped bottle), from the esteemed producer Monteraponi, which is being bottled exclusively for the restaurant. "It's taking something kitschy and making it cool," she says. "When you think of North Beach, you think of those straw-wrapped bottles." Here's the full wine list: 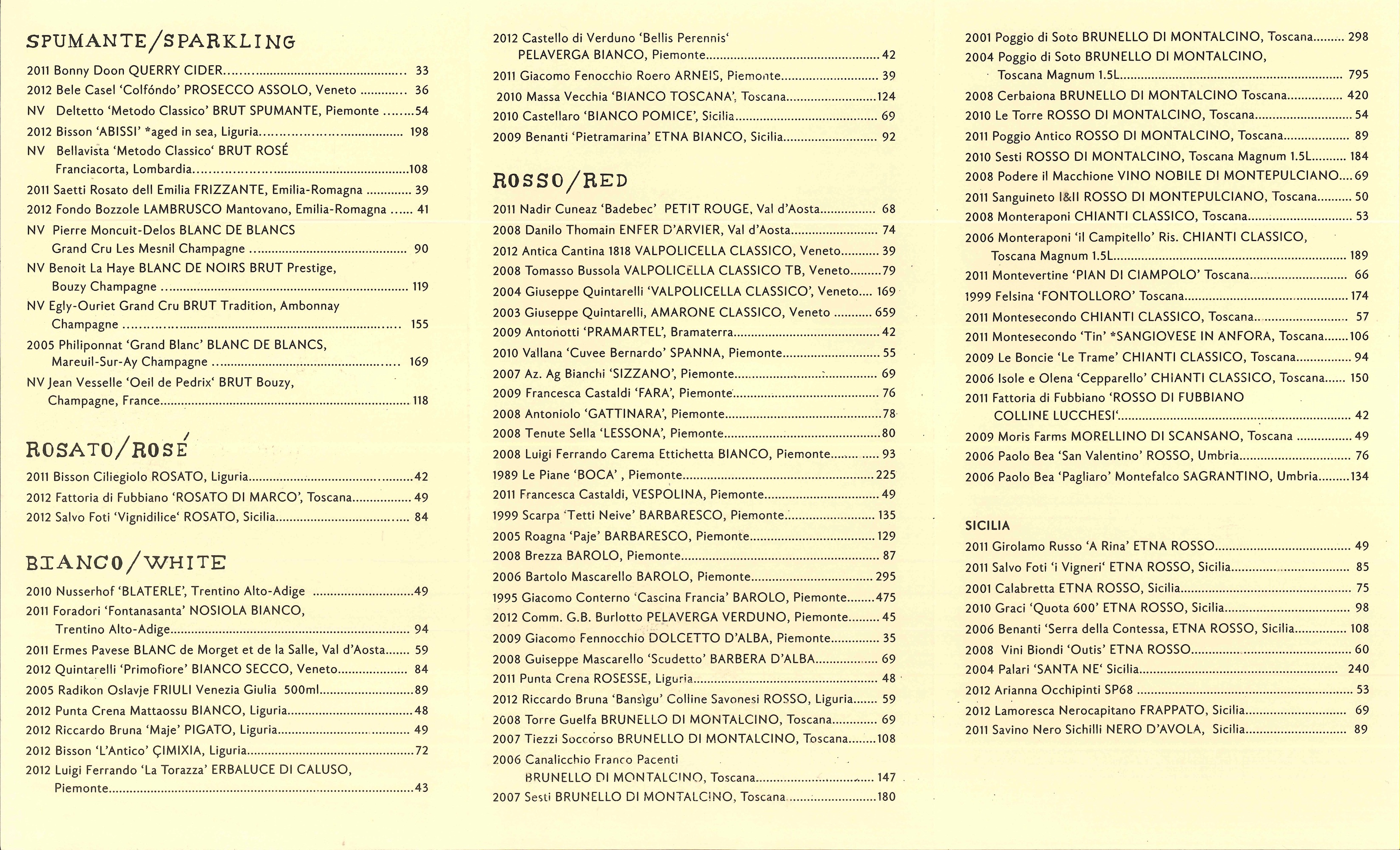 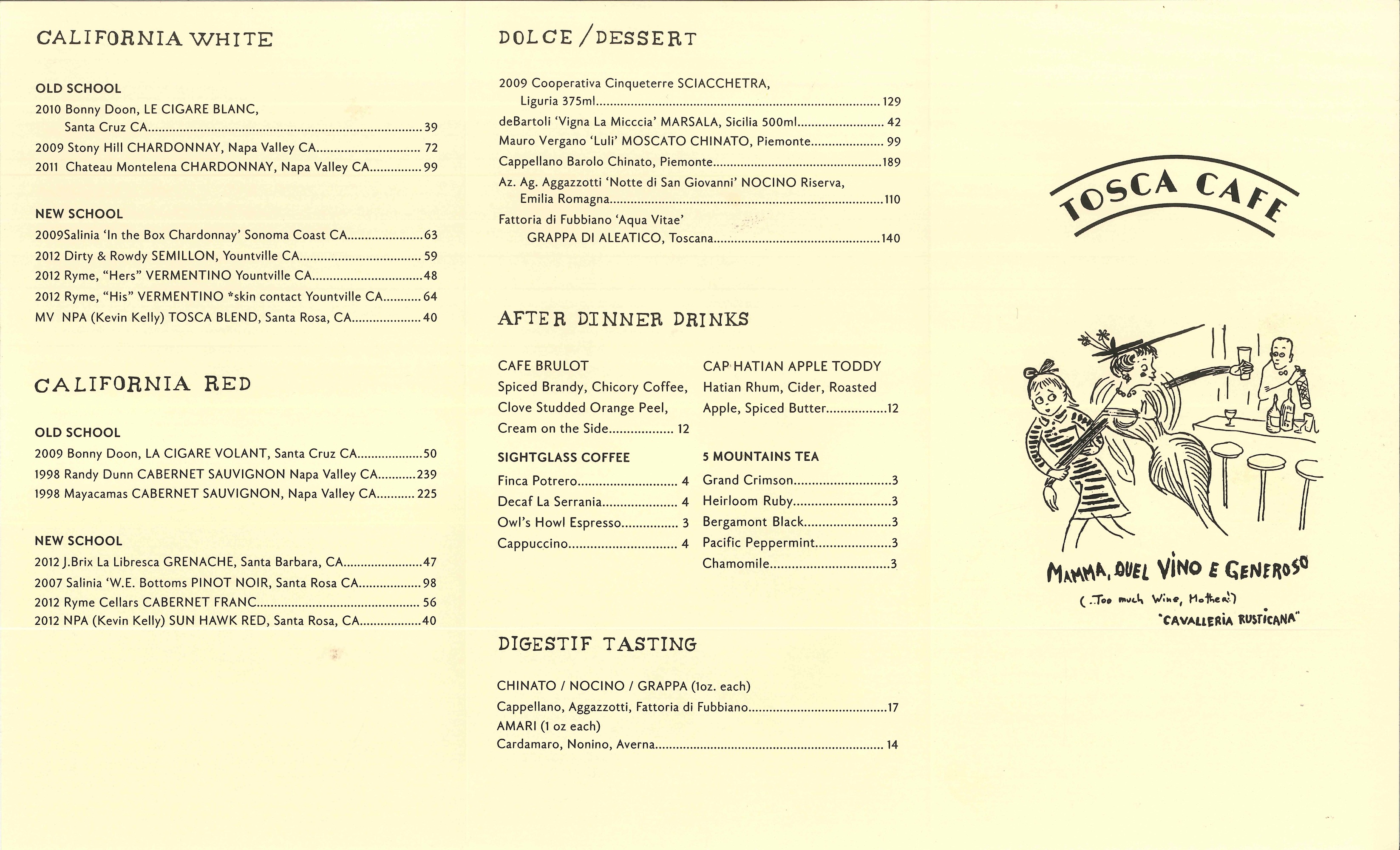 It wouldn't be Tosca without the famous house cappuccino, which Shumway has reimagined for the modern era. His recipe features armagnac, Buffalo Trace bourbon, organic milk, and a chocolate ganache from the Mission's Dandelion. Other cocktails include takes on a Negroni, Pimm's Cup, and gin gimlet, or drinkers can elect the "Dealer's Choice" and have a cocktail made especially for them. Four sparkling wines, three rosés, five whites, and six reds are offered by the glass, as well as six beers (including a special house brew created by Fort Point, the forthcoming Presidio brewery from the team behind Mill Valley Beerworks). Here's the cocktail and wine-by-the-glass menu:

Two more fun facts: The script used at the top of the menus was taken from old Tosca sheet music found in the bar's archives, while the drawing on the wine list is an old advertisement for the restaurant (the little girl is saying, "Mama, you've had enough wine.") We'll have more info on Tosca (and photos!) tomorrow.