It's been a roller-coaster of a Cocktail Week, but one thing's for sure: the Ladies of Liquor have been holding it down. We conclude our series today with Melissa Boyd, a veteran of Bourbon & Branch, Rickhouseand Cotogna, who now mans the bar at Beretta and Trick Dog.

Do you remember the first drink you ever had? Yeah. So, I would say the first mixed drink that I was shown by my older sister was this thing called a Gin Bucket, which we made a lot when we had parties. We took a big bucket, or sometimes a trash can, and we'd fill it with two handles of gin, a bottle of Fresca (it had to be Fresca) and some lemons and limes. So not that bad, honestly, just basically Sprite and gin and citrus. But we would just ladle it out and get completely hammered. So I guess that was my first experience with cocktails.

How did you discover the craft cocktail scene? Kind of a series of fortunate and unfortunate events. I was involved in art and design, and did merchandising and design for a pretty popular boutique on Haight Street for a long time. Some of my clients happened to be guys that were becoming big cocktail bartenders around the city, so I'd sell them jeans and they'd talk to me about cocktails and I'd laugh, because I was super young and thought of cocktails as fruity, sweet, gross things. And I drink whiskey, so these guys were, you know, trying to hit on me. But two of them happen to be some of my very best friends now: Scott Beattie and Erick Castro. Scott actually invited me to his book signing for his first book, and I still thought it was sort of ridiculous, but I got my hands on his book and was like, 'Whoa, this is different.' So that's maybe the first idea I had that this was going to be something different than what I was thinking. Then the store burned down, so I was suddenly without a job, and it happened to be Erick Castro's birthday. I went to that and ran into a gentleman that ran Bourbon & Branch, and he thought I might be sassy enough to work the door for them. I got my first hosting job that way, and then climbed up the ladder really quickly. I had my first Vieux Carré, and thought it was just the best thing that ever happened to me.

Do you remember what it was like to transition to behind the bar? It was actually quite hard. When I first started serving, it was really still a boy's world. Girls served and wore skirts, boys bartended, and that was kind of the way it went. So I actually had to leave the bars I was working at in order to gain a bartending position, because it just wasn't going to happen there. It's totally changed, and now everyone wants a girl bartender. We're like the unicorn, but at the time it was pretty tough. So I fought for it. Even girls didn't want other girls bartending. It was a really weird time. So I ended up going to bartend at Cotogna with Jason [LoGrasso], who I'd worked with at Bourbon & Branch, and we started busting it out together. He was a great mentor, so that was the beginning.

What do you order when you're out as a civilian at a bar? I think this is common for bartenders who do this style of work, but when I'm out I generally will get a glass of red wine or a Campari and soda, that's pretty much my number one go-to. Maybe a shot and a beer, that kind of thing. When you get out, you kind of have this empathy for the person behind the bar, and you just can't get yourself to order a cocktail. At home it's more laid-back, I'll maybe make an old fashioned. I like to do it with maple sometimes, or apple brandy, but always simple.

What are some of your favorite bars around town? I like to keep it pretty low-key. The Hideout in the back of Dalva is probably my favorite to get a cocktail. Your friends can go up front and get Jameson if they want it, or you can go back and get a $40 pour of Scotch. It's really intimate and chill, and the bartenders are amazing. It's a cool little gem. As far as neighborhood drinking, I really like Lone Palm, Mission Bar, and then the new Holy Water in Bernal, I'm really digging that. And of course Beretta, where I've worked for three years and I consider my home bar. 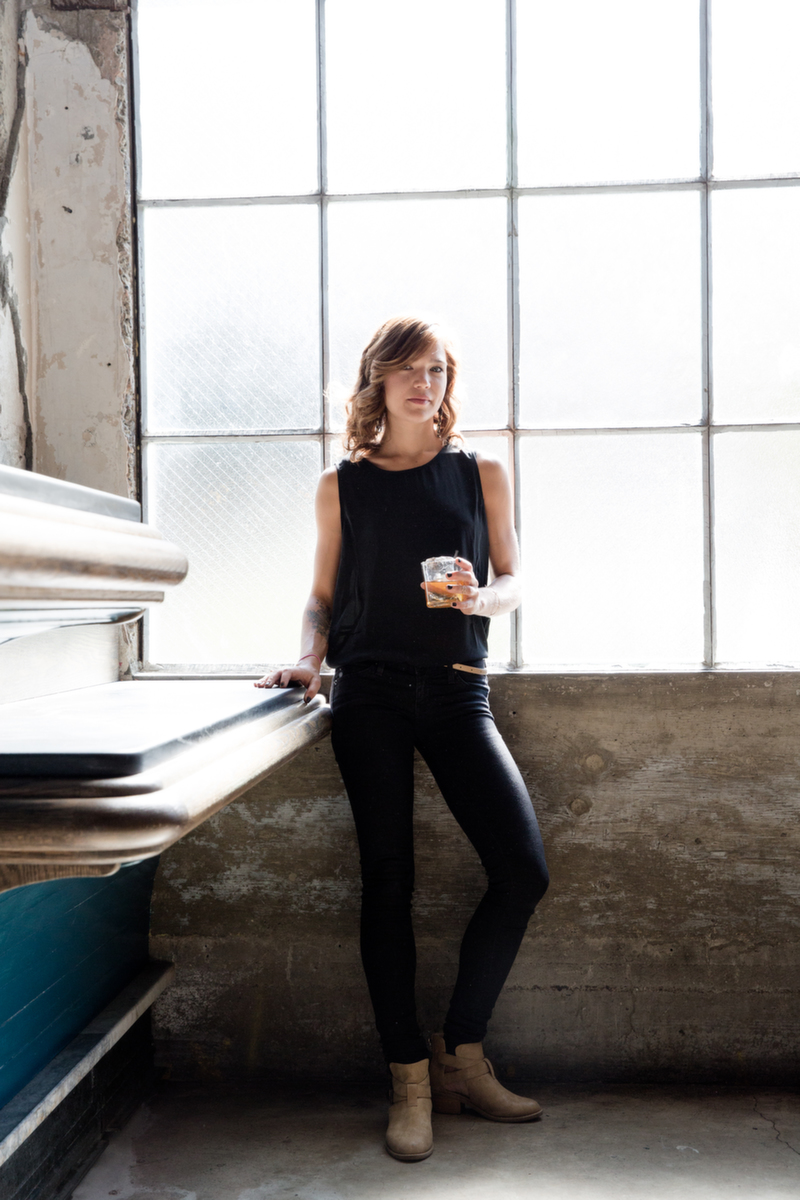 What are your customer pet peeves? Oh man. I try to go into every situation just assuming that person has never been into a bar and they have no idea what they're doing, and I forgive them right away. I can't stand snapping, waving, the person that only asks for something the second you turn around. My number one pet peeve is when people use my name and I've never met them. It drives me insane. They asked someone else your name or they know through some other way, and they'll say your name to you like you know them. It's jarring and weird. You're like, 'Hi, can I get you a drink?' and they're like 'Yes, Melissa.' How do I know you?! But I don't really have a lot of problems with people. I can pretty much shake off anything behind the bar.

What are some of the major changes you've seen over your career in San Francisco? It was...I don't want to say snobby or pretentious, but cold. There was a distance between the bartender and the patron, the drinks took a really long time to make. It wasn't really a welcoming atmosphere. You thought of cocktails as something you get in a quieter, darker setting. And I'm really loving that bars are starting to have fun with it again. They'll have a great cocktail list and great selection, but the bartenders are having fun. They're not so serious. People are paying for what they're drinking, and they deserve to have a good time while they're doing it.

Any upcoming trends that you see on the horizon? I think people are moving towards lower-alcohol cocktails. Sherries, low-alcohol liqueurs, things that don't pack as much of a punch, so you can have some cocktails without falling on your face. Which I think is cool, it's giving people options, and they have interesting flavors, amaros, digestifs, things of that sort. A trend that I'm getting over is the barrel-aging. Such a cool concept, but in actuality, it doesn't really change the cocktail enough to be that interesting. You have to wait a long time, and then the end result is kind of an oxidized version of the cocktail. Oh, I really like cocktails on tap, too. Negronis on tap, anything fun and spirituous that you can get to people quickly—that's a cool concept.

Was there a moment that you realized you were going to do this as a career? Luckily, I have always been doing a lot. And this industry is really conducive to that. A lot of us studied art or design, or do something else, so there's a lot more of a network within our industry than just bartending. It's a really cool family. We all support each other, we travel together, we do more than just bartend. I do a lot of fitness stuff actually, I'm a personal trainer, and I teach classes. I work with kids. So that's a totally other side of my life, and people are really supportive. It's a cool community of people that work hard, but are really humble and talented.

What is a really good day at work? What does that look like? I heard once from a bartender that you should go into every day trying to make one new regular. And I think that's such a good way to go into it. Just try to get one of them to say, 'Hey, that was a great experience.' For the most part, I just love having fun with it. Have fun with your guests, teach someone something, have fun with your coworkers. Don't be too serious. We're still just making drinks, at the end of the day.