Share All sharing options for: Charles Hodgkins Talks the End of Burritoeater

Charles Hodgkins may not be a household name, but his website Burritoeater is considered the gold standard of burrito-related resources in the Bay. With over ten years in the burrito-eating business and 993 San Francisco reviews written, Hodgkins is an undisputed expert on the Mission-style burrito (and, some would add, a local folk hero). He's on the verge of his one-thousandth burrito review, and Hodgkins plans to bow out once the landmark is reached. We caught up with him over a burrito at Taqueria Cancun's Bernal outpost, to talk burstage abatement, the components of a great burrito, and why he hates La Taqueria's slab.

Take us back through time to the beginning of Burritoeater. How did that come about? I had had one of the world's coolest jobs in the late '90s, as an editor of a music website here in San Francisco, and that ran its course. I ended up working for a publishing company in Belmont. Long story short, I was bored out of my skull, and I just thought, I have to come up with some creative project. I really missed writing in my own voice. So I came up with this weird idea at the end of 2002: 'I'm just going to try to go to every taqueria in San Francisco, and eat a burrito and just keep a journal and then maybe do an email newsletter.' The first on-record review I did was New Year's Day 2003. I found a place that was open, and had one of the worst burritos in Burritoeater history.

Why burritos? Why not tacos or quesadillas? I've got no truck against tacos at all, but they're just not nearly as interesting to me. There's not much going on, and they're gone for me in three bites. They just haven't captured the imagination of an urban region the way that burritos have. But more than anything, I've just always really liked burritos a lot.

Tell more about the specific criteria by which you rate a burrito. In the formative days of Burritoeater—before I started actually writing reviews; before I had a website, let alone created a database, let along became a local folk hero—I put on my analytical hat and sort of broke down what makes a burrito good or not good, and came up with all these categories. Burstage abatement was a pretty crucial one, because long before Burritoeater I was priding myself on never letting a burrito fall apart, thinking that I had control over it. When in reality, there's only so much you can do with a burrito that's sort of born to break. So that's where burstage abatement came from. A lot of the others are pretty straightforward: meat, cheese, tortilla. Ingredient mix is one that's easily overlooked, but it's crucial. We've all had burritos that have had way too much rice or were just too bland, even for a person from northern Minnesota. Or the segmentation is off: here's your avocado over here, here's your rice over here. It's the same reason why I haven't gotten sour cream regularly over the last ten years, because there were like two taquerias in town that knew what to do with sour cream. The rest of them, you'd get these egregious bites of just sour cream. And then intangibility was kind of my own thing, because as one person noted many years ago, it's that 'yo no se qué' that you get in a burrito.

How many burritos do you eat weekly, monthly, yearly? Well, it varies. At its height? There was one month where I had 16 burritos, and I've always had a rule that I don't do on-record burritos on consecutive days. So that was a July, a month with 31 days, and I went every other day. That was sort of the most ridiculous. It was about a month after I launched the site. I was also 201 pounds at the time, probably.

Do you feel like your enthusiasm for burritos has faded over the years? Actually, no. My enthusiasm for burritos has not faded. Maybe that points to a certain lack of maturity in terms of my palate, but I'm just not that interested in going out for foie gras, or a $19 grass-fed burger. I still like burritos as much as ever. I wanted a burrito this afternoon, so I got one. I'm not writing about this one.

That is inspiring. I've always maintained that clam chowder in a bread bowl has long since had its heyday, and that the civic food of San Francisco is the Mission-style burrito. I've thought that for a long time. 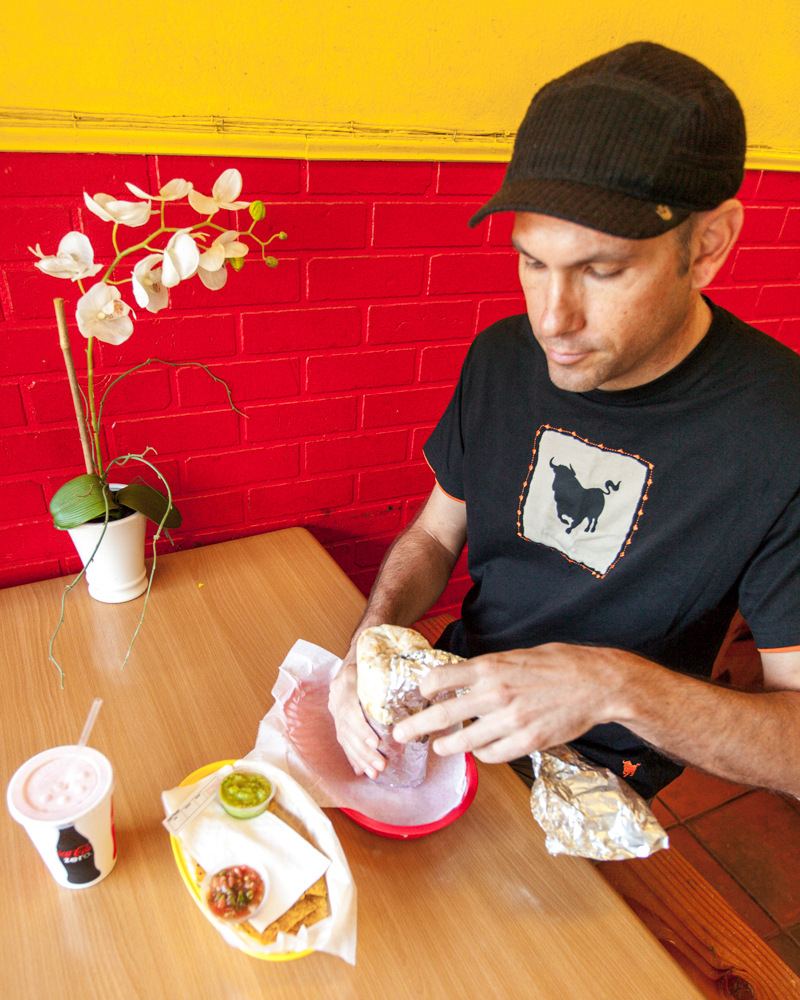 Have you seen any changes in the burrito landscape? Prices have gone up. That doesn't bother me as much as it bothers other people. I went to Papalote a couple weeks ago with a friend of mine, and the burrito came to like $10.09. Minor cause for alarm, now that it's in the double digits, but at the same time, another one was $5.50. And it's not like getting ripped off when you buy a car and you overpay by thousands of dollars. You might be overpaying by like $1.50. So we have to keep it in perspective here. Surprisingly, burritos haven't gotten more gourmet and 'sophisticated.' If anything, I think the burrito scene here is as healthy as it's ever been. There are a number of taquerias that are better now than they used to be, or conversely, that used to be better but are not as good now. For the last month and a half, I've been going twice a week to taquerias on this farewell tour of mine. It's not just my favorite places, it's also places that are just kind of important. Yesterday, I went to La Taqueria—I can't stand their burritos, but I felt like I had to go one last time. But for every place that's a letdown, there's a place like Papalote, or El Castillito, or Cancun, that's going to be rock-solid for time immemorial.

Tell me more about why you don't like La Taqueria's burrito. This is a perfect time to ask, because I just had one about twenty-four hours ago. Where do I start? I'll start with the size. Even before you bite into it you look at it, and it's just a sad little thing. They're really narrow. The tortilla is steamed, which isn't the end of the world, but my burrito was just sticky, pretty uninviting. You bite in, and it's like 40 percent meat. That's a lot of meat. Obviously, there's no rice. Some people love that. I think it's...not okay. So I always give them a zero for rice. It brings down the quality of their burritos. They get drippier because of that. Their pinto beans are really flat-tasting, too. I always ask for my burritos to be spicy, and got zero spice yesterday. The mix was kind of off, even though it was tiny. It's not like it was this gargantuan thing where there's an area code over here and an area code over there. It just was not satisfying.

That's a pretty contentious view. In the early days of Burritoeater, me slagging La Taqueria or championing Papalote was really the flash-point of controversy. Like, 'Papalote is for white people, and La Taqueria is so authentic!' Authentic to what? Burritos are Californian, not Mexican. But I never had commenting on the site, because I didn't want to have to walk around with a fire hose all day. That's one of the reasons I've wanted to remain sort of anonymous, too.

What for you is the most unforgivable sin of a bad burrito? Cold bites are up there. That's often the result of a really poor ingredient mix. That's pretty lame when that happens. Honestly, just a flavorless burrito is almost worse. Come on! Turn on the flavor machine back there.

So what is your favorite burrito in the city? These days it's kind of up for grabs. A couple years ago it was just a no-brainer. I came out and said 'It's Papalote.' But even since then?it's still really good, but I don't know if it's head and shoulders above Cancun, or El Castillito, or El Burrito Express. I went to El Burrito Express and it just floored me, it was so goddamn good.

What's your go-to order? It varies depending on where you're going. It doesn't take long to realize the best order at El Castillito is the al pastor. At Papalote, I think the two best orders are the carne asada and the marinated tofu, which couldn't be further apart on the spectrum. So it kind of depends. Things that I ask for every time are refried beans, assuming they have it. I like spicy burritos, no lettuce. I just hope for a smartly-made burrito.

Do you ever run out of things to say about burritos? I think I've done a pretty good job of not repeating myself, except for the word 'slab' over and over again. I was never a food writer to begin with, and I don't really care to be. I've never really had it in me to adopt that kind of vocabulary. I've always taken burritos seriously, but I've never taken myself seriously, and I hope that's come through in the style of writing.

Why are you ending this incredible adventure of yours? It just feels like the right time. I'm at [993] reviews, and I'd like to go out on a nice round number. I can't say I feel like I've said everything that there is to say, but at the same time, good grief, how many reviews do I have to write to prove my point? Also I want to focus my creative energies on something new.

Looking back on your long career as a burrito writer, what have been the high points? I think in terms of high points, just the fun that I've had, kind of creating a specific sort of sub-sub-sub-genre of food writing. I'm not even sure what you would call it, but just so granular that one person covers one kind of food in one city, and kind of did it to death. There's a certain amount of satisfaction in that. And I could always go to a taqueria. If I have kind of a bummer day or week, I can go have a burrito and it'll be something to do. It's always been there. And there's never been a time when I've been eating a burrito, and I didn't want to be eating a burrito.