The Alta CA Team Talks About the First Week

Share All sharing options for: The Alta CA Team Talks About the First Week

One Week In is a series wherein Eater talks to chefs and restaurateurs after their first week in business at a brand new restaurant. 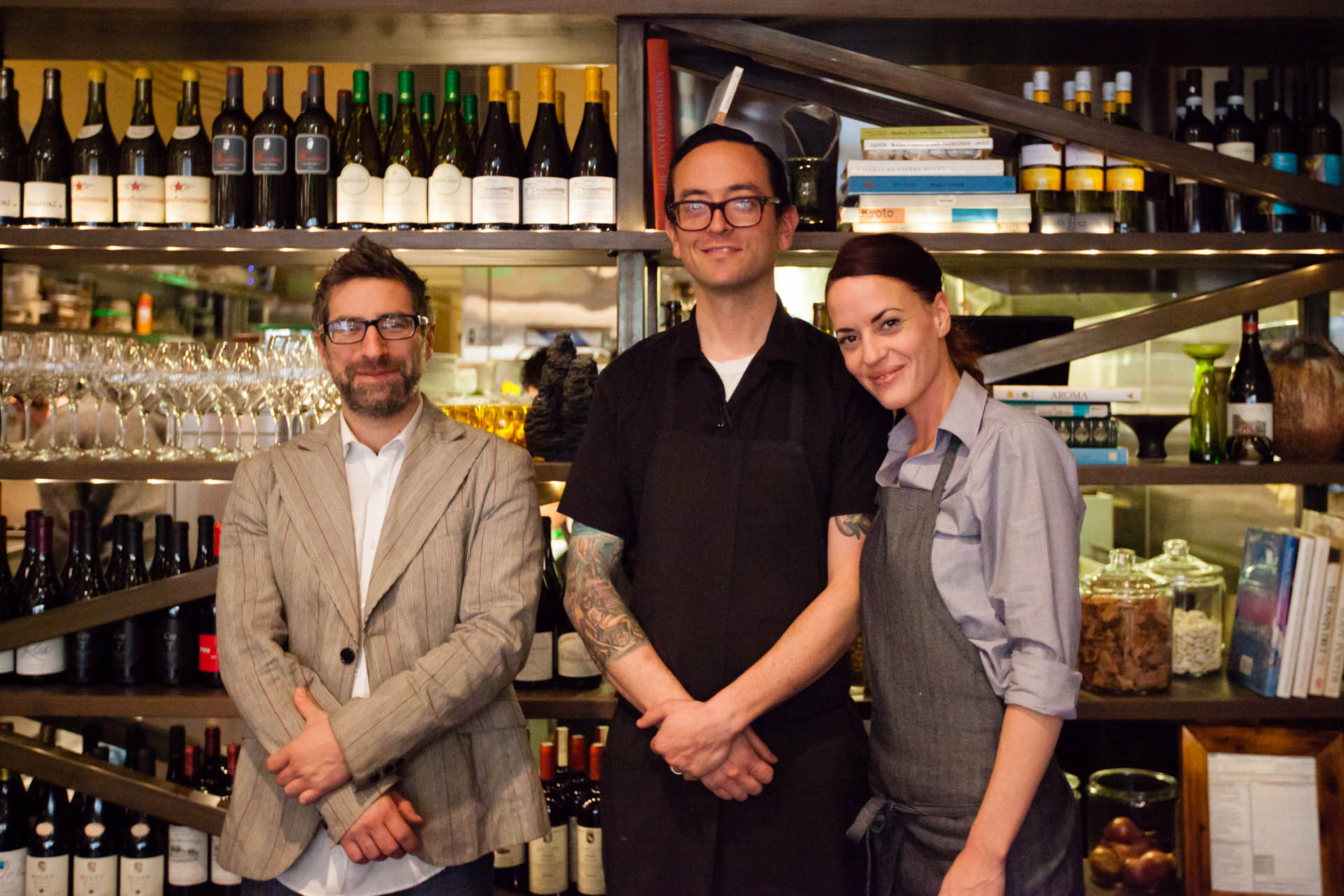 It's been a week since Alta CA, the new mid-Market restaurant from the Daniel Patterson Group, opened its doors to a packed crowd, which hasn't abated since: the restaurant was fully booked for dinner well into its second weekend, and the lunch and late-night crowds were equally hopping. As they marked their seventh day on the job, the team behind Alta—chef Yoni Levy, bar manager Ashley Miller, and general manager Ben Hetzel—sat down with us to discuss the undying reign of the burger, how being under the Patterson umbrella opens doors for whiskey and tequila allocations, and a shelving unit they describe as "a game of Tetris."

So, how's the first week been?

Yoni Levy: Awesome. Wild. I couldn't have asked for greater support from the community, especially the community of chefs and cooks around mid-Market. It's just been amazing. On Wednesday night, we did 150 or 160 covers, and it was probably 90% industry.

Ashley Miller: It's definitely been a lot of industry folks, especially late-night. People are coming to check us out when they get off work. A late-night spot in mid-Market hasn't existed until now. And we have burgers!

Have those been the most popular dish so far?

YL: We just went over the mix today, and we're selling a lot of burgers. Which is fine!

YL: My goal was to make a solid burger. I wasn't trying to reinvent the burger or make it fancy, it's just a burger that I want people to eat as many times a week as they want a burger. So the burger, and then the pork trotter has been doing really well. It's been a relatively even mixture of dishes, but that burger's definitely at the top of the list.

AM: We're selling a lot of pastrami, too.

YL: People love pastrami. Tons of deviled eggs...those are actually the top seller. Beef tendon chicharrones, too. It's all simple, but people like simple things.

On the cocktail side, which drinks are doing best for you, Ashley?

AM: All across the board, they've done well, but the barrel-aged cocktails have been especially successful. The Doc Holliday, a huckleberry Moscow Mule, has been a big success, and so has the Fashions of 1796, which is a rum old-fashioned. Everyone loves that cocktail, and it's definitely our #1.

Ben Hetzel: As for wine, the older vintages have been popular. My goal has been not to bring in reserve wines for collectors, but reserve wines for sommeliers and other people that want to learn. Maybe a bottle's not the most spectacular vintage in the last 25, but we can offer it at a lower price, and it's still a learning experience without spending $300 or $400. With that said, our reserve wines aren't marked up the way most restaurants mark up their bottle program. It's just a flat price, and the mark-up is very modest. Some of the somms who've come in here have been like, "Oh, you'll have that in stock for less than a week." And sure enough, they come back in, and it's gone. Those are the kind of things that keep my job exciting.

AM: In spirits, we're also excited to expand our program with a lot of allocation items that will be coming in over the next few weeks. I can't tell you more, or I'd have to kill you. It's great being a part of this restaurant group, because it made it no problem to get a lot of highly sought-after tequilas and whiskies. It's good to know people in high places, and people want to be a part of this concept.

You guys are open straight through from 11 am until the wee hours. Has the crowd been consistent, or does it tend to peak at prime times?

YL: It definitely tends to peak at normal hours. It's a softer time between 2 and 5, and later in the night. We're just not on people's radars as being open in the afternoon and open late, but that will happen. Definitely the late thing: once everyone at all the restaurants in the city know that the kitchen's open until 1:30 am, I'm expecting we're going to get a ton of cooks and waiters. The lunch crowd is good, too: we've had a lot of big groups from the neighborhood coming in. We've got a 20-top coming in on Friday.

Have you gotten some patronage from the tech companies in the area?

YL: A lot of the same people are coming in everyday. It's pretty great.

You already have regulars?

BH: Unbelievably, yes. Right out of the gate.

YL: We've had people come for lunch and then come back for dinner. It's really nice.

There's a lot of housemade stuff on the menu, including many of the components of the drinks. Are you doing all right, or are you running out of stuff?

AM: Funny you should say that! I had my most productive prep day yet today. I've never de-seeded so many pomegranates in my life. [Laughs.] As you can see, my arms are covered in pomegranate juice. Definitely, trying to figure out the ratio from the bar side is a challenge. But the bar team, as a unit, is really solid, and we're working together to get things prepped. We haven't hit the 86 list on most items so far, knock on wood.

YL: We're rocking all day every day, trying to keep up. We haven't run out of anything on the food side yet, so that's good.

AM: We've both come very, very close, though.

Is it tougher because you guys are working such a long day, and staying open straight through?

YL: It's a long day, but it's the business. We knew what we were signing up for.

AM: Everything is just so hand-done; everything that goes through the kitchen has [Yoni's] stamp, and the same for me with the bar, so it's that, too. Every little detail is so important here, because it really does make or break an item.

What have been the biggest challenges so far?

YL: It's a bit of a game of Tetris in this space. A nice, large, high-ceilinged space, a nice large kitchen, but when it comes to storage...getting things up on those shelves.

AM: The ladder! Climbing up on those shelves like a monkey has been the biggest challenge so far, definitely.

Does the shelving have a ladder built in, or do you have to pull one out when you need to get something?

AM: It will have a ladder eventually, but that's one of those little curves that gets thrown at you in an opening. That one's specifically been thrown out to the bar area, because that's our back bar. We have some tall bar members, and sometimes we have to jump on each other's shoulders.

What are you looking forward to doing in the coming months?

AM: Well, on the beverage side, we're just doing one season so far, and there are so many things that are coming into season. Everything that arrives in season is going to bring a new challenge, and also some new excitement. We'll get over this hump and go into the next one, so we really have to be prepared and stay on top of it so that we're prepared and embracing the ingredients at hand. For example, I'm really excited that blood oranges just came into season, and I've already infused blood-orange vodka, which people can ask for by request. There's so much more to explore, and now that the team is getting confident and comfortable, this is where we start to shine and up it.

BH: For the front-of-house, I agree with what Yoni and Ashley are saying...I just want to have a level of service where there aren't mistakes, and everybody's firing on all cylinders, in perfect harmony. We're getting there. People like the service here, they like the warmth. I worked really hard to get those kinds of people to work here, because I know where we are and how much these people talk to one another. [Nods in the direction of the Twitter building.] I want everyone that comes in to have a really good experience, and I want people to come in here and geek out on things. I want people to come here and find me and talk to me about wine that they've had and liked, and then I can pick out something for them from the cellar, and next week when they come in and do it again, we'll do it again. And then they go on a trip to Mexico, and maybe they start getting into tequila, and Ashley talks to her purveyors. We want to be a concierge service, and make things happen.

YL: Same with the food. Our opening menu is still tweaked slightly every day, and we'll continue to tweak the menu to fit into the space, especially as the cooks get stronger. We'd like to have some more intricate plates.

Yoni, is it hard to strike a balance between comfort-food stuff like burgers that's popular, and the more innovative stuff you want to be doing?

YL: I'm doing what I want to. I feel like we're innovative in our comfort food. When it comes down to it, I just want to make delicious food that everyone wants to eat as often as possible. When I see the same person in here two, three times in this one week, I know I'm on the right track. Can I get better? Absolutely. But I need to put my head down, keep working, keep trying to make the food better.

AM: I mean, at the end of the day, this is fun. It's fun. You get to work and everyone's smiling. Sure, it's stressful, but we're having a good time. I can't keep a smile off my face while I'm here.

YL: The best thing about working here is that Ben and Ashley have built awesome teams, I feel like I've created a pretty good team, and we like seeing each other, which makes it nice. When the managers like each other a lot, it makes for a really good day. I'm hoping that's coming onto the floor and through the food. The cooks are stoked, the servers are stoked, this amazing support from the culinary world...it's just awesome.