Share All sharing options for: Chris Kronner of KronnerBurger 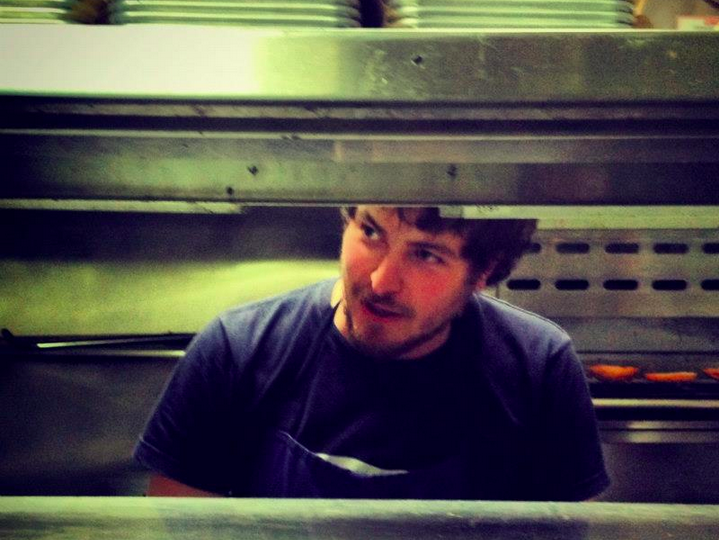 Last winter, Chris Kronner set up shop in an underutilized room of Bruno's and began serving his infamous burgers and bites to hungry late-night diners. But after nearly a year serving food out of the Mission club and an even longer search for a brick-and-mortar location, Kronner is moving on to a top-secret Oakland location all his own. Eater recently caught up with Kronner to talk pitfalls at Bruno's, transitioning to the big-time, and why the Mission just isn't the same as it used to be.

You're in between the Bruno's gig and your new spot. How are you feeling right now?

Great. I mean, we're still in the process of negotiating our lease, but overall I'm pretty happy with how things are progressing.

Are you ready to drop hints about where your new spot will be?

It's Oakland, it's off of Piedmont Ave., but I don't want to say more than that.

Looking back, how do you feel about the year in KronnerBurger?

Overall pretty good. I didn't really ever intend for the popup to last that long. Originally the idea was that it would just be a couple of months, but I've been looking for a permanent space for a year and a half, and it just took a really long time. We looked a ton in San Francisco, we actually considered converting that room that we used at Bruno's into the restaurant, which didn't work out for a number of reasons. But overall it was a positive experience. It also kind of left me with a better understanding of where I wanted to be, which is Oakland and not the Mission.

I lived two blocks from where Bruno's is for seven years, and before that lived for two years on 18th Street. And then I was away for two-ish years, and it was just not the place that I left, which at this point was three years ago. I don't know, it's just not the same. It's super congested, the people, it's a completely different scene. My peer group that used to live in the neighborhood for the most part are gone. It just didn't feel like something that I wanted to participate in any longer. And it's super difficult to get a liquor license, the rents became insane ... It's just not the same.

I live in Oakland now and I feel like the community that supports the businesses there is totally different. It reminds me of the San Francisco that I moved to in 2001. I feel like there, we interact with peers as opposed to people I have absolutely nothing in common with aside from maybe my age.

Were you looking in other areas of the city?

That wasn't really ever an option.

You've finally found a space. Is that everything you dreamed of in terms of what you're going to be able to do there?

Yes. Kind of. For the most part, yes. We've actually come upon an opportunity close by that will allow me to do exactly what I want to do. It's not a small space, but once we did the drawings and looked at a buildout, storage is a bit tight. But we've potentially solved that with a space nearby.

What is your concept for the new restaurant? Is it going to be similar to the Bruno's vibe?

I think that the Bruno's vibe is something impossible, and probably not advisable, to replicate. There's so many Yelp reviews just lambasting us for decorating the room that way. People didn't really seem to understand that that nothing in that space was by choice. Obviously the thinking person doesn't open a restaurant that has a blacked out window and an emergency exit as its front door, with lighting that barely functions, a f---ed up bathroom, terrible plumbing. So those aspects of the Bruno's space will absolutely not be replicated. There is a certain part of that vibe that we'd like to take with us. For what it was, it was cozy and dark and intimate ... I guess you could call it. But this will be cozy and dark and intimate in a very different way.

So you won't have to stand out on the sidewalk wondering if you're in the right place for ten minutes?

And you won't have to think that we're closed because the door has been painted over so many times that no matter how many times I chisel the paint off of the doorjamb, it's still stuck. And you won't have to use a bathroom with a toilet that leaks all over the floor. Or lights that go on and off whenever they choose. The new space is a really beautiful building that has its own character and integrity without us doing anything to it. Honestly I think we're going to do as little as possible, because it's a really beautiful space without needing much help.

What are some challenges that come with opening up a brick-and-mortar after operating as a popup for so long?

Well there's the whole thing where all of a sudden you owe someone a million dollars. And then the part where you are legally obligated to pay for a space for 20 years. So those are a little daunting in comparison to just going and using a nightclub kitchen and walking away at any moment. It's so so so different. As opposed to dealing with the circumstances that are presented to you because of a space, all of a sudden you have to really thoughtfully create a place where we want to eat, and where we hope that people will want to eat and continue to come to for a really long time. I see that as the biggest challenge.

Is there anything about operating in the popup frame of mind that you're going to miss?

There's a very different kind of responsibility. But not really. I mean I love doing the improvised restaurant thing, but at a certain point you just feel kind of homeless. I traveled for a while and then come back to California a year and a half ago. And I kind of feel like I did then. I had given up my apartment. After a while you feel homeless, lost. And that's kind of how I began to feel with the popup. Like, okay we've done this and explored this to the extent that we want to, and now we just want a home, somewhere where we really can express what we actually intend to do, not this kind of fly-by-night, temporary, deal with the circumstances type of situation.

When you do open up, and you do have freedom and control over your own space, what sorts of new things are people going to see that they haven't seen from you before?

I don't know if I want to talk about it yet, but it will not be anything like Kronnerburger.

Will it be called KronnerBurger?

So it's not just going to be 'the brick-and-mortar KronnerBurger.'

It will probably be something a bit different.

You realize you're making me very curious right now …

I understand, but there's still a possibility that something could happen with this lease, and then I'll be back to square one and I'll regret having ever said anything. I've put my foot in my mouth a million times over the past couple years.

But a year from today, how do you hope you'll be feeling?

Hopefully, a year from today we will be open for business. But because the space is not a restaurant, we have a lot to do to turn it into a restaurant. So hopefully all of that will have been completed. Although I don't know if I'll feel relieved, because that's when the actual work really begins. The finding the space and the building it out seems like a huge hurdle until you get to the point where you have to really run this thing that's just been something in your mind for a long time. And then there's the part that people still have to show up.

Will there be a burger on the menu?

Absolutely. And it will be a vastly superior burger than the version we were serving at KronnerBurger.