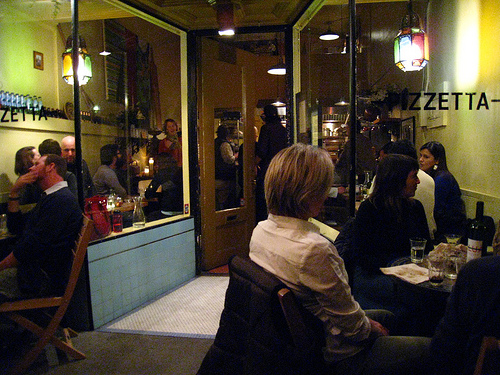 Q: What was the best dining neighborhood of 2013?

Mary Polizzotti, 7x7: I'm going to go out on a limb and say the Richmond. It has world-class food in the Inner (Q, B Star, Burma Superstar, Troya) and the Outer (Pizzetta 211, Cassava, Shanghai Dumpling King, Kim Son, Pacific Café) with zero pretension. You can still get a beer or house wine for $3.50. And Simple Pleasures Café on Balboa at 36th is like the bar in Star Wars—it's a perfect cross-section of the neighborhood and they make the best bagel sandwiches.

Jonathan Kauffman, Tasting Table: Russian Hill is coming into its own, what with 1760, Stones Throw, and Verbena opening within a few months of one another, joining Leopold's, Gioia Pizzeria, La Folie, etc.

Jay Barmann, SFist/7x7: The Mission's still got it. It's kind of hard to beat. It's a gourmand's food court that's the envy of most major cities.

Lauren Sloss, Serious Eats: Hayes Valley keeps getting better and better. And I've yet to tire of everything on Divis. But everyone's really just trying to keep up with the Mission, right?

Tamara Palmer, Zagat: Seems like a great time for Rockridge in Oakland, which got a lot of new action this year (A16, Box and Bells, Bourbon & Beef, Ramen Shop, Osmanthus).

Amy Sherman, Cooking with Amy: Still the Mission, but the Embarcadero is looking up and dare I say it, Russian Hill? Stones Throw, 1760 and Verbena, ftw.

Sarah Sung, UrbanDaddy: Still the Mission, I'd say. But it's grown to include the streets beyond Valencia like Mission, 20th, the 24th Street corridor, etc. Nopa is close, what with Ragazza, Nopa/Nopalito, La Urbana, The Mill, etc. As far as neighborhoods that are making comebacks, Russian Hill is starting to show buzz with Stones Throw, Elephant Sushi, Gioia, Verbena—and 1760, though that's technically Nob Hill. Also, North Beach and Dogpatch are the ones to watch in 2014.

Marcia Gagliardi, Tablehopper: All I want to do is drive to Oakland every week.

Virginia Miller, The Perfect Spot: Though Dogpatch and Mid-Market are on the rise, they're still in growth mode. The Western Addition (ok, if I must call it NoPa…) has grown to be a 'hood with range. From under-the-radar treasures like Jannah and Abacus, to ever-excellent Bar Crudo, Little Star and Nopa, there's a little something for all. With the arrival of Bi-Rite # 2, The Mill (joining area café greats like Matching Half and Mojo Bicycle Café), and the Mexico-City chic of La Urbana and its casual next-door garage, the W.A. has really come into its own.

Brock Keeling, SFist: There didn't seem to be one specific neighborhood this year, no? At least, I didn't think so. Which was a pleasant surprise. If I had to choose, though, I'd pick SOMA and Mid-Market. The former played host to some of my favorites (Marlowe, AQ, Citizen's Band), while the latter had some of the city's best cheap eats (Split Pea Seduction, Tu Lan, Show Dogs).

Carolyn Alburger, Zagat and San Francisco magazine: For once, the action in the Mission seemed to level out. Oakland's neighborhoods started pulling their weight with buzzy new openings like Homestead, Kingston 11, Box & Bells, Penrose, Tribune Tavern, Ramen Shop, A16 Rockridge, and Duende—so many reasons to cross the bridge now if you live in San Francisco. Meanwhile, Coqueta, Bouli Bar, Hard Water and the new Exploratorium gave us many more excuses to hit up the Embarcadero.