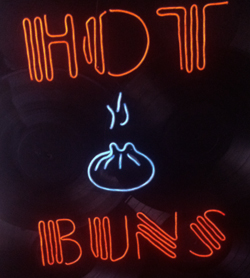 The latest pop-up to hit the Mission scene is American Bao Bar, which is launching next week with a pilot series of weekly events at Nombe (2491 Mission) and Southpaw BBQ (2170 Mission) through late March. The concept, helmed by chef and graffEats mastermind Blair Warsham, aims to cross-pollinate affordable food (influenced by street snacks in Taiwan and Singapore) with savvy San Francisco bar culture. And while graffEats has been known for creating roaming events in secret locations, this may grow into a permanent establishment.

Warsham, a California chef with French training, helmed the kitchen at the critically-acclaimed Tinderbox before it closed in 2008. Last year, he took an extensive trip to Penang, Kuala Lumpur, Taipei, and Singapore, refining his palate for Asian cuisine along the way. Now that he's back Stateside, Warsham hopes to craft dishes that encompass soft and crunchy textures, as well as sweet, salty, and sour flavors.

The first week's menu includes five-spice pork belly, cumin lamb, and seared fresh cheese varieties of bao; chicken soup dumplings with red curry, coconut, and lime; and crispy rice with spring vegetables, runny egg, soy, and fried garlic. The menu will grow as the series continues (look for updates and opportunities to make reservations on the Facebook event page), and is expected to include dishes like Malaysian bouillabaisse and deep chocolate panna cotta with miso caramel.

Look for ABB at Nombe on Mondays from February 25-March 25 and Southpaw on select Tuesdays from February 26-March 26 (February 26, March 19, and March 26). Each event runs from 6 p.m. until the food sells out. Baos will be of the steamed clamshell variety for the first week, but Warsham will be working through other styles of bao over the course of the pop-up, including tandoor-fired, pan-fried, and closed buns that are steamed and pan-fried. Prospective bao eaters should look for the above neon "Hot Buns" sign as an indicator that it's time to get steamy.