Share All sharing options for: The Local Butcher Shop's Aaron and Monica Rocchino 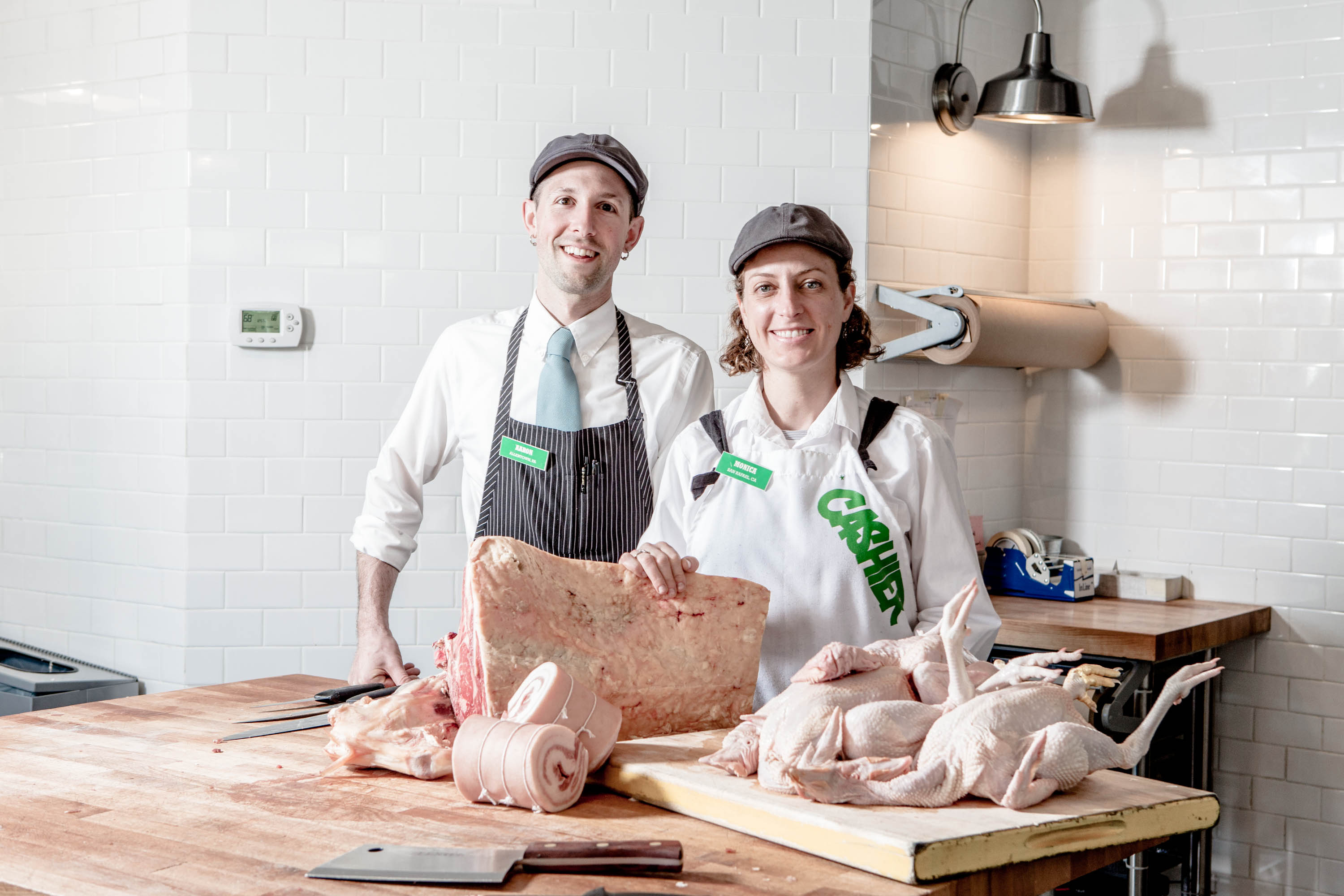 As a catering executive, Monica Rocchino struggled to find local, sustainable meat, a problem shared by her husband, Chez Panisse alum Aaron Rocchino. The couple, who met while working at Oakland's Oliveto, saw an opportunity and decided to open up The Local Butcher Shop in Berkeley, which celebrates its one-year anniversary this month. Situated in the Gourmet Ghetto, just half a block away from Chez Panisse, the shop provides meat from ranchers within a 150-mile radius, and encourages home cooks to sample more exotic offerings like quail and goat in addition to the standard chicken and beef. Eater recently met with Monica Rocchino to talk about her first year running the shop and her plans for the future—which include starting a butcher bowling league, of course.

After a year of being open, what has surprised you?

Everything. [Laughs.] First off, neither of us were trained butchers in the sense of butchering for a butcher shop. In a restaurant, if you make a cut and maybe it's not so visually appealing or maybe it's got a good amount of fat on it, you can still roast that fat and cut it off before you plate it up. Whereas for a butcher shop, every cut has to be visually pleasing in its raw state for people to want to buy it. Even if it's raw, [customers] eat with their eyes first.

We'd also never worked in retail, so that was hugely different. Not only retail, but retail with a perishable product. And the seasonality of meat, which was not so apparent before we became butchers. Buying whole animals from local farmers, it's really quite obvious that meat has its seasons and if they're raised on pasture, the input is seasonal because pastures are seasonal. The animals go from green to dry grasses, and that has a huge effect on the taste, the fat content, the quality. A summertime steer will weigh 300 to 400 pounds more of meat weight than it does in the winter, even though it's the exact same frame size. And it's better-quality meat, because beef season is in the summer and fall.

It's funny. People always think of produce for seasons; they rarely think of animals.

Right, nobody thinks of animals as seasonal. But if they're on pasture, they're just as seasonal as the carrots that are at the farmers market. That's hard to educate people about, because people want what they want when they want it. And they're accustomed to that. It's definitely a limbo of which products you get during off seasons and what different cuts you recommend. We get beef year-round, though we're getting much less of it in the winter than in the summer, so that we can maintain the herd numbers for when they're truly in season. But in the winter, there are technically "worse" cuts for cooking that we still intrinsically want to use, which is great. We want to make stews, we want to use the cuts that have a lot of muscle to break down and cook for long periods of time. Whereas in the summer, when the loin is really well marbled and has a great little cap of fat on it, that's when we want to use it for grilling.

Do you have a lot of customers coming in and expecting it to be like what they would find at a grocery store? Is there a learning curve for them as well?

Absolutely. We kind of joke that every single transaction is an education. Whether people want it or not, I'd say it's 50/50. 50 percent are eople who want to learn and who get it as soon as you explain it. And then the other 50 percent are like, "Oh. Okay," and then they turn around and leave. It's definitely a dance to keep people feeling like they have what they need so they'll continue to come back, but to kind of keep our limitations in mind. The ideal customer is the one who comes in and says, "What's great today? What should I be buying?"

And then it's in your hands and you can guide them.

Have you been reading reviews and what's been written about you since opening?

Yeah, I read everything.

What's your reaction to the response? Has anything you read led to changes?

First off, I'm totally ecstatic; I can't believe what a good response we have had. It's really cool and it makes us feel like we're on to something. And yes, some of the responses have elicited us to change things around. There's definitely been feedback, via Yelp or even customers just calling or telling us what they think here at the cash register. Some people don't get it, and they won't get it, and they don't want to get it, and that's fine. They're not our customer, and we're not going to be the butcher for every single person. We can't compete, nor do we want to compete, with Safeway or Trader Joe's or Costco. I think just the cost of goods, people don't really understand that, and cost of goods is insane. [Laughs.] You pay for what you get, really, and our prices are what they need to be in order for us to be sustainable in the sense of continuing our operation. We're not pricing our meats to make a million dollars, we're just trying to be open for another week. With movies and books and documentaries coming out about the true cost of raising real product, whether it's vegetables or meat, people are slowly starting to understand.

I also noticed your name tags say where you're from.

Who are some of your favorite customers? And what do they usually get?

All of the regulars are our favorites. Some of them come in and do exactly what I mentioned earlier, ask us, "What's great, what do I need to cook now? Steer me to a great dinner." And that's always really fun for the butchers and it makes them feel trusted, which is really our end goal. I also love when customers run into other customers that they know and in the background there's a big conversation happening. It just becomes—well, not like your local bar, but a community center, which I love to see.

Has anyone come in with a weird or interesting idea for cooking meat, something you may have never thought of?

I don't think so. Because our butchers are all trained chefs and they all have such extremely different cooking backgrounds, they're pretty representative of everything that's out there. But what's really fun is that we have a pretty large international population, thanks to the university, so we do get a lot of people coming in asking for different cultural cuts of meat. Different countries have different established ways of butchering an animal, and so people will come in wanting to know if we can cut something specifically the way they had it in their home country or the way they grew up, and it's fun to see them so excited when we can do it for them. The international community also orders a lot of the innards and offal that isn't as popular in American cuisine, which is great too.

Do a lot of restaurants come to you as well?

A good number. We really are trying to maintain our focus on retail and enabling the home cook to get these products. Because for the most part these restaurants can order directly from the farmer. That being said, very few restaurants have the space to order a whole cow, so we do supply Chez Panisse with all of their beef, and everything else that they need on the fly. We provide all the ground beef to Pixar for their staff cafeteria. And we're doing all the pork fat for Ramen Shop, because they use a lot of pork fat for their fried rice. Beyond that, we do have a few other wholesale accounts, but they're kind of as-needed. And we try to keep it that way, because our priority is getting our product into the home cook's hands.

I saw the short documentary you were in, "The Subculture of Butchers." Do you feel like you are now part of this butchering community? Do you guys hang out and talk about different ways to butcher meat?

I wish we did. I think if we were in the city, where most of our colleagues are, that would be an easier thing to do. We definitely have a sense of camaraderie; it's not a competition with our fellow colleagues. They have the same kind of philosophy that we have, about producing good-quality, pure meat for people. It's definitely a competition with folks that claim to be doing that and just aren't. We've been trying to get a bowling league together.

Of butchers? I love that idea.

Who would be on your league?

If I could pick our killer butcher bowling league, well then we'd have Ryan Farr from 4505 Meats, and the ladies from Avedano's, and Olivier's. It would be fun. We could get the guys from Cafe Rouge.

Have you pitched this?

Nope! [Laughs.] We're just now coming up for air. Starting to think about doing things that are outside of being here.

Do you have a favorite cut of meat?

My personal favorite cut of meat is a hamburger. [Laughs.] But I'm the only one in the shop who has that opinion. I love hamburgers that are made with meat where I know exactly where it's coming from. There's no questions of how it was raised, or what's in it. We grind it 5 to 6 times a day. I love a good hamburger.

You also make dog food here, is that right?

We make 80 pounds a week. We use liver, hearts, pork offal, ground beef, trim, carrots and a seasonal vegetable. Really good, iron-rich stuff. Dogs flip over it. Our dog is crazy. He doesn't even chew it. He just gulps it. We have that program. I mean, we make chocolate chip cookies with lard, we make orange and rosemary soap with the beef tallow. We really use everything that we possibly can.

Do you find that since opening, you now eat more meat?

It's about the same. I thought it would be way more or way less. But because I was so wary of buying meat before, unless I truly knew the source, I didn't actually cook that much meat. And I was also mostly cooking for myself, because Aaron was at work. Now we have meat about three or four times a week. But whenever we go out to eat, we order fish. [Laughs.]