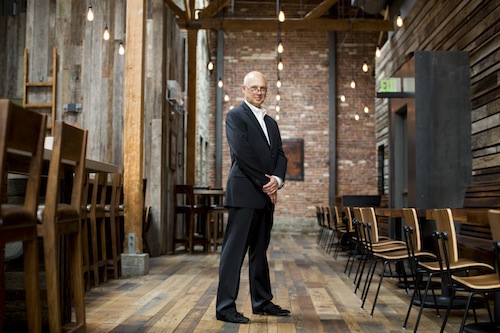 With a three-star ranking from Michael Bauer and a longlist nod for Outstanding Bar Program in this year's James Beard Awards, The Abbot's Cellar has taken its intended place as a national leader in craft beer and beer and food pairing. The restaurant is the second effort from the Monk's Kettle team of Christian Albertson, Nat Cutler, and chef Adam Dulye, and its massive 100-seat space was intended, in part, to help assuage the near-constant waits at its much smaller predecessor. Eater recently met with General Manager Hal Russek, who shares his insights into hospitality and the ultimate way to get a table: arrive with Christopher Walken.

7:30 p.m. on a Saturday night, what's the wait for a table? Could be an hour to an hour and a half. This is the Mission, so we try to keep part of the restaurant available for walk-ins.

What's the longest wait you've seen? Probably about 90 minutes. I don't like to keep somebody if I don't think they can get in in 90 minutes or less. I'm not going to tell them 45 minutes just to keep them hanging.

What would you suggest to people seeking a shorter wait? Make reservations in advance. We don't overbook. But book enough in advance that when you come in, your table is going to be waiting. Especially with large parties, try to make sure that people arrive on time. Where we usually run into trouble is when people have arrived late, they're hanging out, they're comfortable, they don't want to leave. We're expecting that table to become free again after three to three-and-a-half hours. And it isn't.

And they linger. Yeah, but I made it a rule that I will figure it out [when it happens]. I'm not going to say anything to people. If they want to stay for three-and-a-half hours, that should be a great thing.

Has anyone ever tried to make negotiations for a table? No, I think those days are largely gone. It hasn't happened here, but I'm told there are people who will take a peek at OpenTable and check on a name and say "I'm so-and-so." But I haven't seen it here.

Ferris Bueller style. That's right. I've seen it in other places, where it was probably easier to spy on a table.

Have you had any outrageous requests from customers? It's not going to be outrageous to them, but people who want to bring in 20 people on a Friday or Saturday night at 7:30. We're just not equipped to accommodate that [party] size.

Strangers becoming friends. I mean, it works much better at a bar. Honestly, the community table, I've seen more people taking photos at the community table than any other table at the restaurant. When people get up from their seats and crowd around with their arms around each other.

Interesting. Why do you think that is? It's an unacknowledged part of the dining experience. We come to restaurants not because we're too lazy to cook, or because the food at a restaurant is better than what we could do at home, but to connect and participate in a shared experience. People love the chef's table for that. They love the interaction with the line cooks and with the other people they're sitting alongside.

Do you have favorite customers? I suppose. Generally, though, when I go home, what I'm thinking about is people who really got it, really understood what we're trying to do here and perhaps weren't expecting it, but really felt like they got an exceptional experience in terms of the food and craft-beer pairings. And, of course, the other thing that haunts me is people we disappointed. It doesn't happen often, but it happens.

And they let you know, then and there. They don't always. I'll tell you a story. There was a gentleman very early on, maybe August/September. He stopped me to say that he would be surprised if we were still around in a year. I was not here on the second occasion when he came in, but he said the same thing to one of the other managers. He came in again. Why do you suppose that is? I can't figure that out. I think there are a lot of different reasons for it. People have emotional needs they want met in a restaurant, that we do talk a great deal about meeting. Matching excitement levels and intensity levels of people. Making sure you're not being low-key when someone's celebrating something. And a lot of times, more than anything else, I think that's what people want in any sort of social situation. They want acceptance. Any sort of disinterested style of service, or connection to any of the staff here that appears indifferent, should rub people the wrong way. And it does.

Oh, Facebook boy comes in. Well, he was in once. He sat quietly. I understand. I worked in L.A. for a long time. Celebrities are reluctant to make their presence known. Otherwise, it creates a flood of attention that kind of gets in the way of the experience.

Do you do anything special for VIPs, in terms of waits? There is one guy, Michael Franti. He came in twice as a walk-in early on and we just did not have the space for him. And I felt terrible, not so much because I like his music, but because he came in twice and we couldn't do anything for him both times. I'm sure he doesn't feel marginalized. I'm sure he's successful enough. So I do have a Michael Franti rule. And actually, if Michael Franti reads this, let Michael Franti know that I will figure it out. I won't let him leave a third time. But both times he came in, we were crazed. And OpenTable is a necessary evil. I would love to have walk-ins alone, but I just can't do it. I'd feel the same way if we had to say the same thing to anybody who tried to come in more than once and we couldn't seat them.

So the Michael Franti rule can apply to anyone in that situation? Yeah. I mean, I'd recognize Michael Franti. The hosts are not going to necessarily be that tuned in to someone else. Which is a shame. And I think we've decided as a group, the entire restaurant, that if Christopher Walken walks in, anything he wants, anywhere he wants.

He's great. I'm glad you chose him. I hope he reads this.

I hope so, too. And not people who can do impressions of Christopher Walken. We think that's great, but...

Do you have a favorite dish? We change the menu daily. So I don't know what my favorite thing tonight is going to be.

Favorite dish from memory, something that may stand out? I'd like to see the bone marrow come back on the menu. And I know it will. But when we go through the menu at lineup, something will pop out at me. Sometimes it's something we haven't run with for a while, but it's always something good, as it should be. And the way that comes about is someone contacts Adam [Dulye] and says "I put bok choy and broccoli together. I though it would be cool. Want to try it?" and he'll say "Yeah." And if it's something that hasn't existed before, that's going to get my attention.

When you're not here, where do you like to eat? I love La Folie. That just pops up. When I want to sit back and just go with it, and have confidence that I'm going to be well taken care of. I like walking into a place and if I can look in a server's eyes and that server gives me confidence, I can say whatever you think. I love that kind of experience. At the same time, I love the burger at Monk's Kettle. And everything in between.

In your role as a Gatekeeper, what advice do you have? You have to really think that you're offering up something worthwhile. Otherwise the struggle to make it work for people is going to be bigger. I think, philosophically, you have to believe there is a higher purpose to this than just feeding people.