Founded in 1965, Joe's Cable Car is one of the oldest places in San Francisco to grab a burger. Originally just a cable car that served burgers to-go, the Excelsior establishment soon evolved into a sit-down restaurant stuffed to the gills with neon signs, twinkling lights, and large floral bouquets reminiscent of funeral arrangements. Joe Obegi, a native Armenian, has worked there since the beginning, and took over as owner in 1968. In 2008, the restaurant's popularity underwent a renaissance thanks to human tiki drink Guy Fieri, who featured it on his show Diners, Drive-Ins and Dives. Obegi had mixed feelings about the experience, but admits that it did boost his business. Now that the hype has died down a bit, we dropped by to chat with the old-school burger legend.

When you moved to San Francisco, what made you want to own a burger place? I first worked here as a manager during my college days. Back then, there was no phony, imitation [burger]. Anywhere you went, you could have a decent burger. That's one thing that bothers me about the fast-food industry. It should not be called a burger. They make it taste like a burger, it looks a bit like a burger, but it's not a burger. And this is why I emphasize as much as I can that we serve ground steak. People call it a burger because it is ground, but I wish they would see it as ground steak.

So when you first opened, fast-food competition wasn't a problem? No, it wasn't a problem. There was no phony product. But the prices, compared to back in the '70s, they have gone up. They've tripled. Everything is so expensive that competition, especially from the fast-food industry and the big grocery chains, the price doesn't matter. So they have to cheat. And they make a profit. But they're hurting everybody else.

For you, what makes a great burger? The beef. I have nice people coming in here repeatedly because they are educated, and they tell me that my price is very reasonable. Anywhere you go, you have to pay for a better product, whether it's shoes, a T-shirt, or whatever you buy.

Where does your steak come from? We get it from the Midwest. We are using the best meat, from IBP [Iowa Beef Processors, Inc.] Editor's note: IBP was acquired by Tyson Foods in 2001.

How often do you get beef shipped in? We get it two or three times a week. But now they put it in a bag and suck the air out, so it can be stored for two weeks. It's better than the freezer. That's no problem there. Our meat has the marble. White marble. That's your flavor. That's the sign and the true flavor. You cannot have steak without marble, because it's not going to taste good or have any flavor. To get that is [a] choice; you have to pay more. People look at the price accordingly. If they want to buy cheap stuff, okay. But what bothers me is it's unfair to ignore the product and what you're buying, and just talk about prices. Through college, I'd order a loaf of bread, a cube of butter. Sometimes cheese. Eat it and be quiet. When I got paid, I'd go eat steak. One time I bought a TV dinner. It looked so delicious on the picture, frozen, right? I was tempted, so I took one, put it in the oven, followed instructions. When I got it out of the oven, it was different than in the picture. It stunk. It went straight out of the oven and into the garbage. I couldn't even touch it. 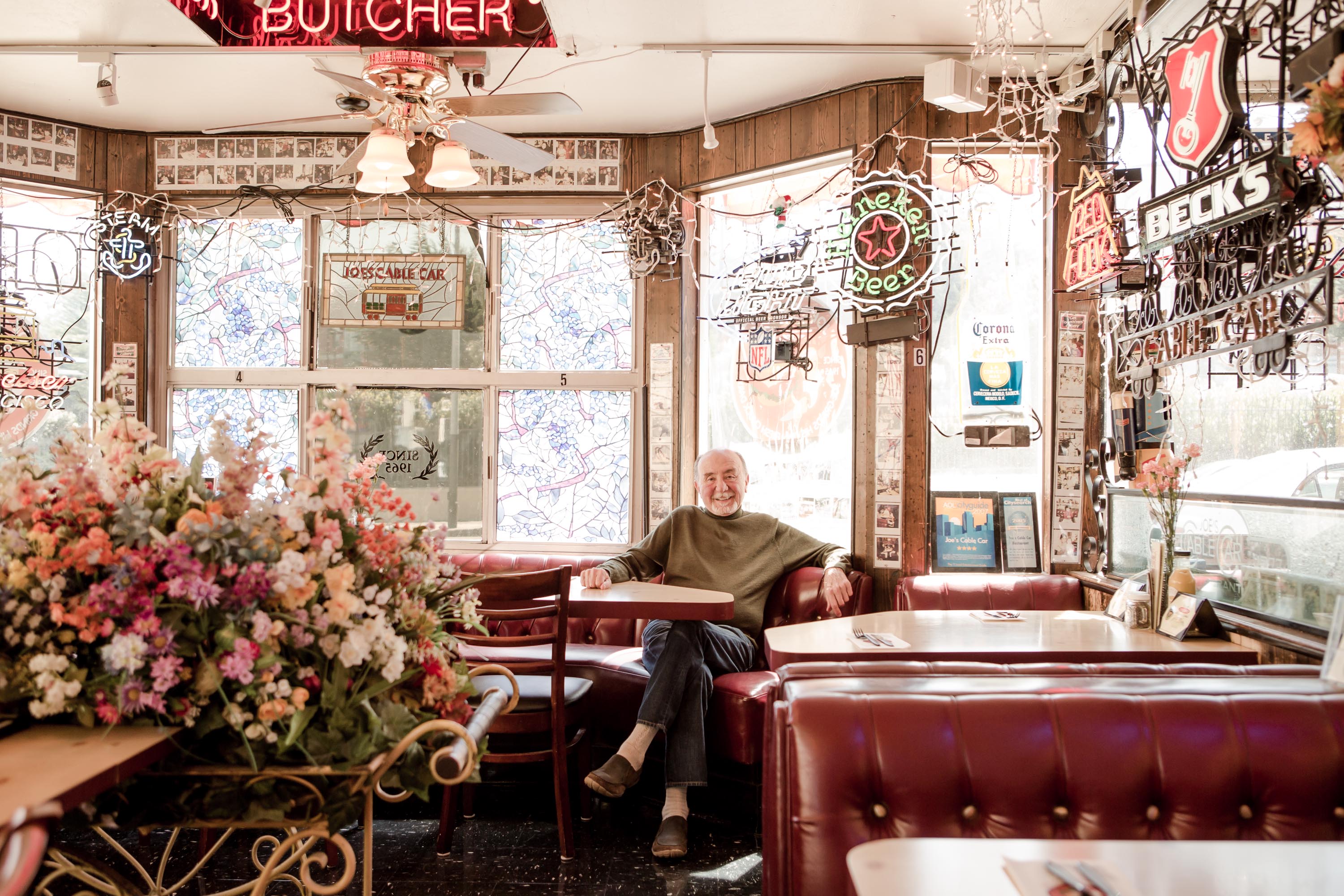 What did you study in college? I started to do computer [studies], but I stopped because I couldn't afford it. So I took this job and ended up in the restaurant business.

Over the years, I'm sure you've fostered some regulars. We get them from all over the Bay Area. As far as two hours. We get them from Stockton, and then from L.A. And also all over Europe. Last week we had a couple from London and they were complaining [because] they stayed at the Fairmont, and they said, "How come the people at the Fairmont don't recommend this?" Because their friends in London said, "Make sure you go to Joe's." And they were very happy. We get them from China, Japan. You name it. Australia. There is no country that hasn't been here. We were written up in European magazines, and still people say, "Joe, you should be having people out the door." And it is not. Because of the economy. Because I'm not downtown. I had a customer who use to work for Hewlett-Packard. I met him two or three years ago. He had just lost his job after I don't know how many years. He stopped by a few weeks ago on a Saturday. I was busy seating people, but he talked to me, and talked and talked. He said he found an outstanding burger and it's cheaper than [mine]. No comment. You know what he did before he left?

What? He ordered one to go. That's why it bothered me. If you want to talk price, talk price. But don't argue quality. It's choice, it's fresh and cooked to order. The other thing that bothers me is the well-done people. How do you eat your steak?

Medium-rare. That's the right way to do it. Well-done is for the birds. There's nothing left in it. When I was a kid and got sick, the one thing we didn't want to do was eat. You lose your appetite. My grandma used to come to me with the steaks and say, "Honey, I know you're not hungry. Don't feel like eating. But I want you to chew this." She would cut a piece of steak and I chew, chew, chew. Spit it out. She gives me another piece. This is your vitamins. When you take a well-done piece of steak, it's like chewed-up beef. Dry. The flavor is gone. I try to tell as many people as I can.

What's your opinion on cheeseburgers? I don't like cheese that much. I love cheese on the side. I love cold cheese. The minute you melt it it becomes, for me, I feel like it's heavy. Like butter. I ask people to please taste the meat before they put on any mustard or ketchup. And then if you want to put ketchup or mustard, it's your say. If you want to ruin it, ruin it.

So when you have a burger, there are no condiments? We do mayonnaise. Lettuce, tomatoes, onions, pickles, it's on the side.

What's your personal topping preference? I put one leaf of lettuce and some Roma tomato. I don't want to interrupt the meat too much. People ask for extra tomato, I give them extra tomato, whatever they want. But purposely—not financially, for the sake of the flavor—I minimize the lettuce and tomato. You can't beat it. The best form is plain. We have a diet burger. It's the same, but with no bread. People just love it.

Are you into bread? I love bread. Any kind of bread. I like the baguette, the French bread. But too many ingredients, and it gets lost. I work hard, I serve good food all day long. I'm not going to go eat mediocre food.

How often do you actually eat burgers? It's embarrassing, because I eat them five to six times a week. Everyday I come here and have a burger. Once in a while I'll have an avocado with oil and vinegar, salted. Again, simple.

So that's your one day off from a burger meal. Yes, but I still enjoy my burger.

That's good. Do you eat burgers anywhere else in the city? Are you kidding me? [Laughs.]

How much steak do you guys go through in a week? Maybe 150 pounds. We we're on television back in '08 and God saved me because the show [Diners, Drive-Ins and Dives], it [aired] three or four times a week. Sometimes two times a day, On the weekends, three times. There were traffic jams. We were literally choking.

Was that the busiest you've seen this place? Oh God, yeah. Busiest ever. I counted the best day we ever did; in this small space, we served 700 people. We were packed all the time. Rushing all day. I was lucky I was able to get that many people. We had 27 employees. Now we're down to 17. It's good to have those extra people, otherwise it would have been a big mess.

So you were well-prepared for the impending rush. I was lucky to get enough people. It's a tough business. It's not unusual for people to tell me this is the best burger they've ever had. Some of them are fifty years old, sixty. Because it's just not available. Restaurants, they're eliminating the red meat because it's hard to compete. So that's where we are. Are you hungry yet?