Bruce and Sheila Chapman of It's Tops Coffee Shop

Share All sharing options for: Bruce and Sheila Chapman of It's Tops Coffee Shop 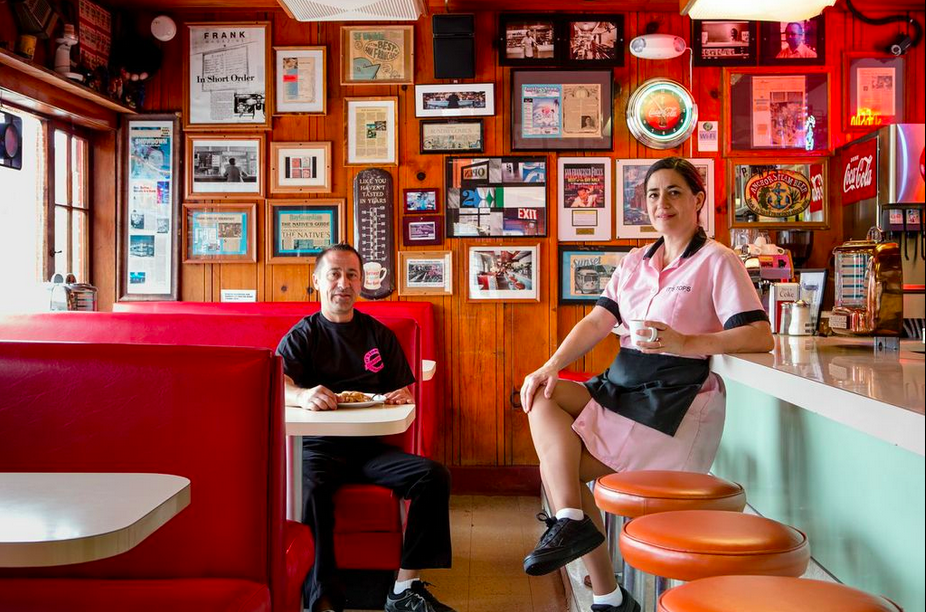 It's Tops Coffee Shop might be San Francisco's most recognizable diner. Located on Market Street just off the 101 exit at Octavia Blvd., it sits at the intersection of four of the city's most bustling neighborhoods: the Castro, Hayes Valley, the Mission, and the Lower Haight. It's also historic, having served up pancakes and cheeseburgers under the same name since 1935.

The current owners are the brother-sister team of Bruce and Sheila Chapman, who spent the weekends of their childhood and adolescence learning the ropes of the family business. Whether they were waiting tables or scraping gum off of them, they learned everything they needed to know from their father, Richard Chapman, who became the restaurant's second owner in 1952. In 1986, the Chapman siblings bought the business from their father, and they've been running it ever since. Eater recently met with the Chapman's at It's Tops, where they reflected on the family business, the neighborhood changes, and thoughts for the future.

How did you come to own It's Tops?

Sheila Chapman: We worked, going through school, every weekend for years. My father had a heart problem, and he had to wrap [the business] up, so he asked if we wanted to buy him out. We trained for a year, full-time, and then it was just me and my brother.

Having grown up with the business and then gone off on your own, why did you decide to come back?

SC: At the time that our father wanted to see if we would buy him out, I was working downtown in non-restaurant work, and Bruce was just starting college. I was waffling between the two, should I do this or that, and I started getting the "You grew up in it, it's a good business, you'll be your own boss," thing going through my head. And we said, you know, we're bad-ass. We can handle it.

Bruce Chapman: We said, we'll try it for a year and see. And he just threw us in here full-time, and would bat us back and forth between breakfast and lunch and the front and back so we would both have this repertoire.

Can you explain the name?

BC: It came before either of our times. It used to be the Minute Man Cafe. The closest we can track the name is from a photo that a customer brought us from the early '40s, and it has the name "It's Tops Coffee Shop." It was named by the previous owner, Vick.

Do you both serve and book here?

SC: We've both done everything here at one time or another. Any aspect of this place, we've done it.

BC: When I started, my Dad would drag me in at 6:30 am, and really grind me on breakfast.

SC: When I first started waitressing, I was around 13. When Bruce first started, around [age] 7, he was learning how to clean everything. His first job here was height-appropriate: it was scraping the gum off from underneath the tables.

BC: Yes! And cleaning the jukeboxes. I would work for food. A milkshake and a burger. I used to take the eggs and put them in little containers and scoop little jellies.

SC: And every Saturday from then on, for the rest of our lives, we literally earned our way into ownership.

Did you change the menu at all?

SC: We improved it.

BC: With all that we learned and the changes that occurred in restaurants, we changed it a little. Not much. We still have all the comfort foods. The burger is almost identical to the original burger served, but bigger.

BC: We have our own [meat] mix that they make for us. We also used to have 50 different kinds of coffee beans back in the '70s, before Safeway and all these stores were doing it. We had these shelves filled with different kinds, and each morning, we had a sign listing which country the beans would come from. And my dad would make me blind-taste them, and would say, "Which country is this from?" But we stopped doing that once all the stores got tons of beans.

What's your favorite thing on the menu?

B: The burgers and the pancakes are awesome, and the newest stuffed waffles are a phenomenon.

SC: Yes, the stuffed waffles have evolved from the '50s bacon waffle.

BC: It's like pigs-in-a-blanket, plus plus. It dawned on me, when I was really hungry one day, to just put everything in the waffle. It started with bacon and cheese and potatoes, and I even threw eggs in there, but it was a mess.

SC: The experimenting month was crazy in the kitchen.

BC: We have a whole other level that we're waiting to release [for the stuffed waffle]. It's another notch up from what we have, but with more garnishes and dips. More like finger food.

SC: My favorite thing on the menu is the banana-peanut butter pancakes, because the peanut butter is spread between each pancake and stays all warm.

Did your dad develop these recipes?

BC: Vick [the original owner] had the burger thing going on, but when my dad went to the Korean War, he learned from the military how to cook. After that, he was a manager at Foster's Freeze downtown.

BC: In the military, they have a whole system of mass production, of teaching people how to cook. Then he came back and bought It's Tops.

What about your mom?

SC: She used to bake everything when she wasn't taking care of the [four] kids. She would make the pies and brownies. One she used to make was a walnut pie, like a pecan pie but better.

What aspects of the business did you learn from your father?

SC: One thing that I will say about my father is that he was the epitome of efficiency.

BC: Talk about '50s diner and military efficiency.

SC: Every movement, every way, he found a way to be the most efficient. He would bring six full coffee cups to a table at a time. He didn't believe in trays. We didn't even know what they were, because he thought the place was too small for trays.

BC: Why did we not use trays?

SC: Because it was grab, fill, and walk. But with a tray, it's like, you set the tray down, fill, set it down, walk around, pick up the tray... 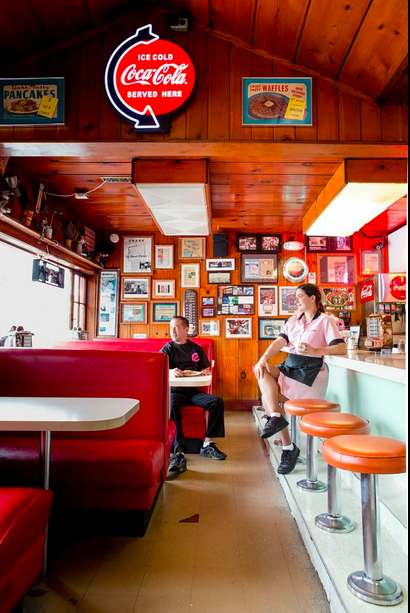 Do you have favorite customers?

BC: We have a full range of customers, depending on the different shifts.

SC: Customers come and go, but they always seem to come back.

Geneva Holloman, waitress: Sonya, who is a high priestress of the goddess of Isis, is my favorite customer. She was stung by a sting ray five times when she was a child. She's psychic, but she only reads positive auras.

Did she tell you this when you first met her?

Holloman: No, she was shy at first, but I took her to her gender-reassignment surgery last week. I've made all kinds of friends from working the 3 am shift.

Bruce and Sheila, do you know Sonya?

SC: Yeah, we know Sonya. There's people from all walks of life who come in here.

Do you have any least-favorite customers?

BC: People that come in and don't try to pay. Even after all these years, I can't say that I don't take it a little bit personally.

SC: I don't currently have a least favorite.

BC: He used to be around the corner. He would come in, have a burger, and then he kind of went crazy. He was schizophrenic and had a bad phase. He broke our window.

SC: No, that wasn't Steve-o. It was Johnny. It was raining when it happened.

BC: Oh, Johnny! We were always good with him, had a rapport, and then he just had a bad phase. There was a customer sitting there, and he broke the window from outside with an umbrella and really scared everyone.

SC: So then we said no more.

BC: But he kept coming in, then he would go away for three, four, five years.

SC: And all of a sudden we would be like, "Johnny's back!"

Any others worth mentioning?

SC: What about Bobby? He would come in because he had a crush on one of the male servers, and he would take pictures of everyone who worked here. And you'd wonder, what he was doing with those pictures? Then, he stopped coming in and would call at noon every day, saying crazy things, then hang up.

BC: Then one day, he came in, and a waiter thought something was wrong, so he looked through his bag when he went to the bathroom, and he had a tape recorder recording everything. But let me say, we've had many great, beautiful, intellectual, good business customers over the years.

Have you had any notable people dine here?

BC: Who was the big producer guy that did the diner thing, Pulp Fiction? Tarantino? He loves our coffee.

SC: Because he said it's not too strong. It's diner coffee.

Sheila, have you always had pink uniforms?

SC: No, when I used to work here, I made my own uniforms and I could pick the fabric. But we eventually purchased uniforms because other people started working here. We had these black ones that were matronly, but then I wanted something nice and bright. Now, our customers love these pink ones.

Do you see anyone in your family lineage taking over the diner?

[Bruce's stepson walks into the shop with his girlfriend and sits down at the counter.]

BC: [Laughing.] Hey, would you take over this place?

SC: Well, you're on the wrong side of the counter.

How do you feel about the changes to the neighborhood?

SC: It's taken a long time for this little area to be re-gentrified or up-and-coming, but because the freeway has changed, everything on this edge of Hayes has improved. That whole area is great. I think it's improved our business, and so has the [LGBT community] center across the street. Overall, the area has improved, and we no longer feel like we're in the outlands. We feel like we're in the middle of everything.