Share All sharing options for: A Sommelier's Greasy-Spoon Drink Pairings 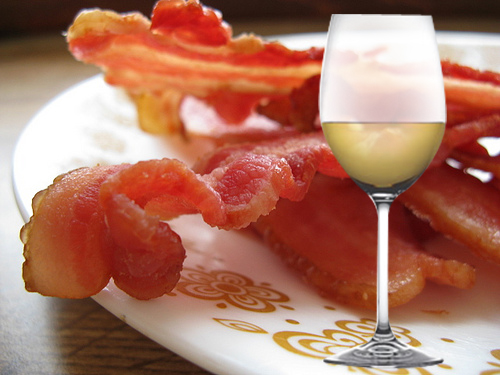 Herb Caen once said that "cockroaches and socialites are the only things that can stay up all night and eat anything." Though we don't know many socialites, some of these spots where "anything" could be had would probably qualify as greasy spoons, the late-night bastions of the out-late crowd taking the edge off of an oncoming hangover with an indifferent plate of, well, anything. But if you find, as we do, that the best diners and coffee shops of our fine city are the unsung heroes of the dining scene, then these spots deserve a closer look (sorry, Herb).

But let's stick with the picture of the late-nighter at a greasy spoon, because herein we're going to consider the adult beverages that best pair with good greasy grub. (Sure, many of them don't have liquor licenses, but that doesn't seem to have stopped anyone as of yet.) We'll discuss the best drink pairings for bacon, donuts, fried food, and pancakes, as well as classy versions of these dishes you can get at nicer joints, if greasy spoons aren't your thing. Socialites, roaches, and the rest of us, stand corrected and ready to knock back a few cold ones, yes?

With no further ado:

Bacon, Bacon, Bacon: I mean, we have to start here, right? Bacon epitomizes the fare of the greasy-spoon genre, and it's actually perfect for pairing with the right pour, given its oozy, gamey saltiness. We're going to suggest that an ideal beverage here is a smoky, woody Scotch or bourbon. The bite of the alcohol will obliterate the fattiness of bacon on your palate, making way for the essence of the meat to shine through. Obviously, any greasy spoon worth its overabundance of salt could hook you up with a few strips, but if you're looking for a fancier vehicle for this application, the thrice-cooked bacon at Mission Chinese Food is a good choice.

Donut Me: Coffee shops everywhere have served up millions (billions??) of this essential late-night staple for generations. Let's pair these lovelies with something sweet –because you always want to pair sweet foods with beverages at least as sweet –like a bourbon milkshake. (Yes, we're going to roll right along with the Bourbon trend here, thankyouverymuch.) The crawfish beignets at Brenda's French Soul Food could be a more haute application of the concept, but you can get the authentic effect at your neighborhood 'spoon.

Runner-up: While this breaks a bit with the sweet-with-sweet rule, it's too good not to mention: MateVeza's (limited) Girl Scout Cookie Ale brings just the right suggestion of sweetness we need, dressed in the more grown-up trappings of a brew. Pair with a simple, unfettered article, like a plain glazed.

Get Weird: Now that we've styled you with ten great spots to enjoy fried food, it's time to find the perfect pairing. We're going to pull the socialite card and recommend Champagne for fried foods in general, and in this case, by the magnum. Because most 'spoons are gonna require that you BYO (when allowed) your best beverages, why not go big and bring a double bottle? Champagne's superpowered acidity tames excessive fat from frying, its pert effervescence provides the ultimate foil to the texture of fried foods, and its fabulosity turns the greasy spoon experience on its head, making for maximum merriment. As for a more upscale food pairing, our gratitude goes out to the kind folks at Boxing Room, where they're dishing up deep-fried alligator. Though perhaps not the greasy fare that first comes to mind in considering this genre, we couldn't resist mentioning it–come on, it's alligator.

Runner-up: None. Just do this.

No Waffling: We know, we know: sometimes only a stack of overly buttered pancakes or excessively syrupy waffles can tame the hungry beast (especially in the very early AM hours). Why not get a jump on your hair of the dog by serving up your stack with a side of eggs? The Flip is a warm cocktail with an intriguing heritage: a version of the drink, appropriately known as the Iron Flip Dog, was originally made hot by scalding a mugful with a hot fireplace poker. (Chow has the full story).

Comprised of such treats as eggs, sugar, cream, spices and molasses spiked with your choice of booze (brandy, sherry and port are often used), it's a sweet-enough hug of a cocktail to stand up to the heartiness of a pancake and the sweetness of the accompanying syrup. So long as your greasy spoon isn't using a health code-blasting fire poker to warm it up, you should be good to go. As far as cool waffle joints go, we're loving Bernal's new Suite Foods, where pearl sugar caramelizes the goods, making for a built-in sweetness that's as seductive as it is addictive.

Runner-up: Could you really consider anything else now that your hair of the dog has the word "dog" built into it? If you must, look to something sweet and cozy, like a spiked hot cocoa or your neighbor's shoulder, where you may or may not take a brief nap while digesting.

If you live in SF, we know you don't really need an incentive to go out late, drink beautiful drinks, or get over to the nearest greasy spoon to refuel, but hopefully you've found some inspiration here for your next power outing. Cheers.