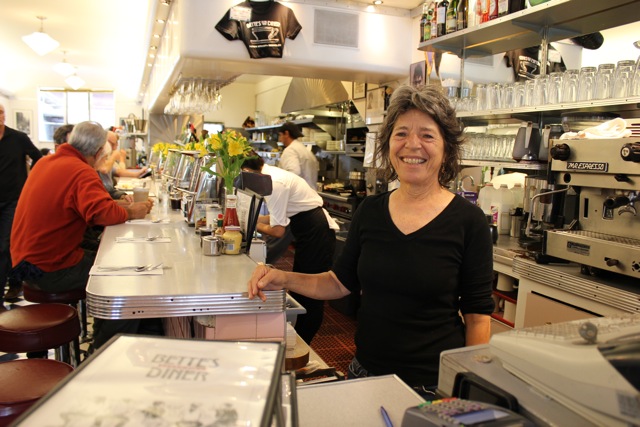 Bette's Oceanview Diner is an East Bay staple that's been serving up scrapple, souffle pancakes, and fresh diner-style favorites since 1982. Named for the West Berkeley neighborhood that used to be called "Oceanview", it has no actual ocean view, although customers still ask about it. What it does have is a fiercely loyal following of regulars, as well as a weekend brunch rush that's not for the faint of heart.

The owners are Manfred and Bette Kroening, a husband-and-wife dream team that still work the counter, 30 years later. Eater recently met with the eponymous Bette at the diner, where she shared her thoughts on souffle pancakes, serious lifers, and of course, gophers.

How did Bette's Oceanview Diner come into being?

Bette Kroening: Where do I start? I changed my career from being a clinical social worker to being a cook, which is what I was meant to be. I had a job at the Fourth Street Grill in 1980, and Fourth Street was just being developed then. I got to meet Denny Abrams, who owns the whole block, and he wanted to put in a restaurant there that was more down-to-earth and approachable. The whole neighborhood was kind of oriented toward building and architecture and contractors and construction, and so we wanted a place where all these guys could come every day.

I asked Sue Conley, who I had hired at the Fourth Street Grill, if she wanted to be a consultant, and that turned into a partnership. And so we started out with Sue and Manfred and I. She was here for 11 years, and she now has Cowgirl Creamery and is a big cheese mogul. She's a mover and a shaker, that Sue.

Why did you choose a diner concept?

BK: I grew up in New Jersey, so I grew up in diners. We decided that a diner would be the right kind of restaurant to attract regulars and locals. I also loved the idea of not serving dinner. If you have a restaurant and don't have to serve dinner, then you have the possibility of having a life!

How much has changed since you first opened?

BK: Of the interior, not a bit. Not one bit, nor have a lot of the staff. Trudy, who's cooking this morning, she's been here 30 years. And Darryl, our other main cook, has been here 29 years. We have a lot of lifers. In the restaurant business, having people who work here a long time is one of the keys to success and consistency in the food. They know all the regulars, when you come in the morning and people see the same faces. And we've had many romances come out of that.

BK: Well, our host Ed hires the waiters and waitresses. Nine years ago he hired Angie as a waitress, and it was a really good hire, because they started going out, and then they got married, and now they have two children, and she still works here as the business manager. We've had waitresses who've married customers, we've had staff who've married each other...a lot. We've had at least 10 couples come out of the restaurant.

How does Manfred figure into this whole story?

BK: We wouldn't be here if it weren't for Manfred. Manfred is a journeyman tool-and-dye maker from his training in Germany. All I can say is he can fix anything. What they do is make machine parts and molds for tools and parts, so it can be as big as the hulls of ships or as small as equipment for brain and eye surgery. For years at home, we had like 10 toasters in our workshop, and now it's waffle irons that we have a lot of. Stuff breaks constantly. But he's also responsible for all the waitstaff and the repairs, and he's the host on the weekends. He's the host with the most.

How did the two of you meet?

BK: Through mutual friends at a New Year's Eve party in 1976. He hardly spoke English, but I totally fell in love with him that night. In his broken English, he told me stories somehow about his life and his friends, and he's a very animated person. We've been together for 35 or so years. We're really different, which keeps it interesting. He really is amazing, and really creative. 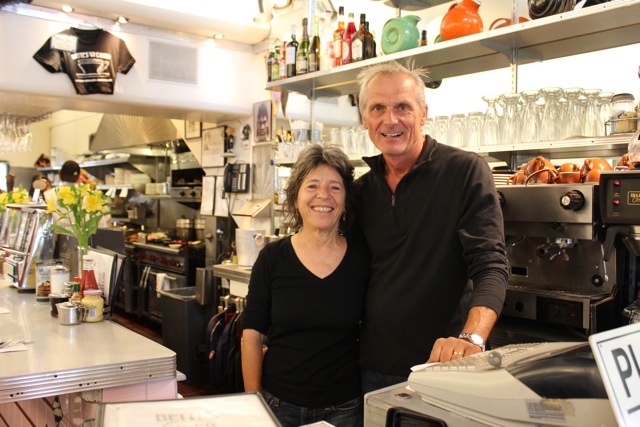 Has the menu changed at all?

BK: It's expanded, but the core things we have have not changed. Like the souffle pancake, which is kind of our signature ... I hate that term! I hate "foodie," I hate "signature," but anyway, it's a signature item. Apple brandy souffle pancake, banana rum souffle pancake, mixed berry in the summer, mango pineapple. It was a recipe I found in Gourmet magazine, March 1980, and I made it for Manfred for breakfast. And we've had it on the menu since the beginning. And then also we were on that Diners, Drive-Ins and Dives, and they featured that. [Here's the video.] We sell so many of them. It's such a pain in the ass, but it's a showstopper. And then there's the scrapple, which was also on that show.

Scrapple ... what is scrapple?

BK: That's the most frequently asked question we get! Scrapple is a Pennsylvania Dutch specialty... I guess you would call it a sausage. But it's pork and cornmeal. Originally the idea was to use all the parts of the pig, ears, noses, cheeks, everything, and they stretched it with cornmeal. But we use pork shoulder and hocks. Our scrapple is fabulous. I feel like scrapple is a little bit trendy now, but we get a lot of scrapple regulars. All the Philly-area people know about our scrapple, and we sell it next door [at Bette's To Go] by the pound.

There's always a long wait to get seated on weekends. How do you deal with that?

BK: I mean, we have 45 seats. We're really, really small. And the weekends are horrible, it's ridiculous to wait that long for simple food, but people love it and we entertain them enough so that they stay. On our busiest day ever, we served, I think, 565 people, which is outrageous in a restaurant this size. But we're still having a contest to see if we can beat our record.

What's the volume of output that you guys do per week?

How does the farm fit into the picture?

BK: We dreamed and fantasized for 20 years that when we got older, we would have a farm for old cooks to retire to. We looked for 20 years for property, we looked everywhere, and we finally found this place in Sebastopol that's 5 acres and had been an organic farm. We grow fruit and vegetables and flowers. We planted 75 olive trees, we have 120 heirloom fruit trees, which is too many, but we manage to eat it all. Last year we had 100 cases of apples, and we used it all in baking and apple sauce. This year I want to make cider. We grow beets, green beans, kale, swiss chard, cucumbers, hella pumpkins, winter squash, summer squash, lettuce ... I'm going down the rows. Basil, arugula, lots of herbs.

How do you split your time?

BK: Four and three. We work here four days a week and three days on the farm.

So you have no days off?

What are your biggest challenges with managing the farm?

BK: We worry about water. And weeds. And gophers and moles. We have gophers out the wazoo. We learned how to trap gophers, and we've trapped 950 gophers. They would eat everything if we didn't deal with them. The Russians left Northern California because of the gophers and the fog. They're terrible. They can take down trees! But I feel like we're making an impact. This year, they've mostly eaten all my dahlias.

What does the future hold? Are you up for another 30 years at Bette's?

BK: For the foreseeable future...I don't know about another 30 years! Manfred has declared that when he turns 60, he's not going to do hosting on the weekend, so that frees us up to spend more time on the farm. But I still love it, and I still feel that our presence is really important. And I'm still into looking for new dishes for specials. I try to keep it interesting. I read magazines, I read blogs, I'm always looking for something fresh and new, and it still totally turns me on.