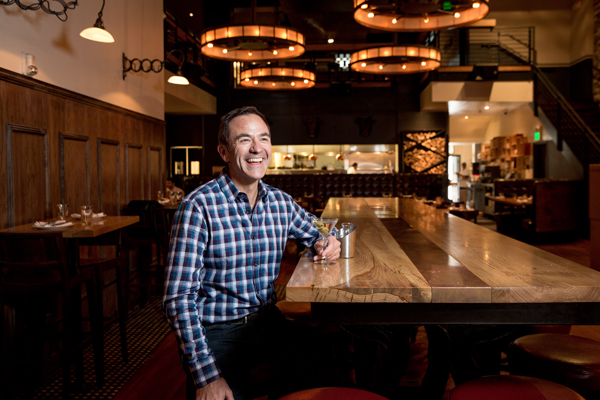 Sprawling, Argentine-inspired steakhouse Lolinda is celebrating its first anniversary on Mission Street after an "absolutely packed" year, according to owner Adriano Paganini. Lolinda is just one of the many restaurants in Paganini's portfolio, which includes Beretta, Starbelly, the recently moved and revamped Pesce, Delarosa, Super Duper Burger and the forthcoming Uno Dos Tacos. But there's something personal about Paganini's massive revamp of the former Medjool space, which as of three months ago now includes El Techo de Lolinda, a rooftop restaurant that adds a relaxed street-food component to Lolinda's creative steakhouse fare. We sat down with Paganini and director of operations Brian Reccow to talk growing pains, rooftop weather and the benefits of sharing that steak.

How was the experience of unrolling the rooftop after the restaurant was up and running?

Adriano Paganini: We did it that way by design, because we didn't want to open the whole thing at once. But then again, it did take us longer than expected. Originally, we wanted to open the rooftop only a few months after the downstairs, but then it was winter, and so we thought, let's wait until spring. It ended up [opening] nine months after we opened the downstairs. But by then, we had the right staff on board. I mean, this is a large operation. We employ almost 90 people in here. We have a management team of nine in between the front and the back. So in a way, it was good to have the downstairs only for almost a year, because the downstairs felt very solid before we opened the upstairs. Of course, when we opened the upstairs, we had to go through a whole new period of adjustment, because the upstairs is actually very busy. It's like a whole other restaurant, with 150 available spots up there.

Brian Reccow: It's a stand-alone restaurant. There's a synergy that we've created between the two properties. The efficiencies, and the ebb and flow of weather up there, and how that impacts two totally different environments that are linked together. The weather in San Francisco can change into so many different microclimates over the course of the day, so that is one of our biggest challenges.

So what happens when it starts raining at 4:30?

AP: We haven't experienced that yet! Because we've only been open for three months up there.

BR: There's been a couple of sprinkles ...

AP: I mean, part of it is covered.

BR: So we're weather-resistant, but we're not weatherproof.

What's something that's surprised you guys in the last year about the way the restaurant has gone?

BR: I think we're more than pleasantly surprised at how people have taken to the Lolinda concept, of what we're doing as the only Argentinean steakhouse in the city, as opposed to maybe some traditional steakhouses. I think we've been really pleased about how that's happened. And the surprises for the roof ... I don't know if there are any surprises, because the whole thing has been something of a surprise. We've rolled with it and we've learned to adapt to all the different guests that are visiting us. It's a great surprise to see how much energy that there is in the Mission, and all the other things that are going on.

AP: I mean, we expected the rooftop to be very busy, and it's been busy. The downstairs is great, and it's absolutely packed on the weekends. I guess it's not a surprise, but we're definitely aware of the challenges of running this large of an operation on three floors. It's been good, probably because we did it in stages. It's under control. I guess one of the surprises was how difficult it was to come up with a good system for getting people up on the rooftop, but not too many of them. And the whole thing of if they want to drink versus if they want to dine with us. That was a whole thing that we had to figure out. The whole system was challenging, because there was a point where we had people wait down here to go up there to wait for a table a second time. And that cannot happen.

When you first opened, what were your expectations for this space?

AP: My original expectations have been met almost to the dollar, in sales. It's very close to what I expected in terms of size. Aside from the sales volume, the other piece we're very pleased about is how receptive people have been to the whole idea of having this alternative steakhouse, which is the only one in San Francisco. When I say "alternative" I don't mean that it is Argentinean-inspired, I actually mean because it's shareable. Part of the original idea was to create a steakhouse that was affordable, but in the sense that you can order whatever you want and you can come for the experience of whatever you want. We don't put pressure on you to order a big steak for yourself. We do the opposite. We suggest that you share and order whatever you want. So we have all sorts of occasions here. We have people coming in, four guys who are ordering four ribeyes of 18 ounces each, and we have other people coming in and ordering one ribeye and a few appetizers. Other people come in and don't even order a steak. You don't have to commit to this big meal, which allows people to come back more often because it's more flexible. It also allows you to order what you need without wasting. The other thing that is unusual is that our menu has a range of cuts in size and price. I mean you can order a skewer, which is $12 and it's plenty of food. You can come in and then you can go out and have fun: you don't have to go home and sleep because you ate too much.

In terms of the menu, if you have someone coming to the restaurant for the first time, what items do you specifically recommend?

BR: You know what, to start on the menu, I think the ceviches are so well-known now. The empanadas are kind of a have-to on the menu. And then there are enough interesting parts of the menu, like the bone marrow and the pork belly, like if you want to reach a little bit. And then it comes back to sharing the great steak, or the pork chop, which is just over-the-top phenomenal. If my brother came in, that's how I'd guide him. I'd say you gotta try the ceviche to brighten up your palate, something a little more traditional in the empanadas, and then our chimichurri sauce is just a natural accompaniment to everything.

AP: I agree with Brian on everything, but in addition to that I would say the Corbina seabass skewer is amazing. I always order those when I come in with a group of people. And then the asado mixto is also very good, it's like a mixed grill of different meats all cooked on the wood fire. And then the pork chop is also really nice. Those are my favorites for sure.

Is there anything that hasn't worked that you had to adjust over the last year?

BR: We had to look at the speed of our cocktails upstairs and make some adjustments. Downstairs, we have spirit-driven, forward cocktails. Upstairs, we have citrus, tropical in a sense, Latin-American inspired cocktails. We have to adjust things by batching. We were doing every cocktail to order ...

AP: And we were having an uprising from people who were waiting too long. Like, you know, we almost got killed couple of times ...

BR: The natives were restless ...

AP: They were going to throw us down!

AP: So we said, we've got to give them those cocktails faster.

BR: So that was a big learning curve.

What are some of your favorite spots for a night off?

BR: Well there's this place Beretta that we go to ...

AP: I live in the Mission, and actually there is one place that I go often with my family. I like Mexican food, and I go to Regalito on 18th. It's got great Mexican food, so I go there often when I want to stay away from my own places.

BR: You know, when I'm done with a day here, I go over to Lucky 13 and have a cold beer. Or Molotov's. Those are my two spots. I come out of this world and I go and find some anonymity.

AP: Now it sounds like we only go to our own restaurants ...

What does the future hold for Lolinda?

AP: What I like to say is that we really only opened three months ago. The whole thing came together, so we're looking forward to building repetition and making sure that what we do we do perfectly at all times. I actually think the business, which happens to be very good now, is going to grow and grow next year. If we do what we do consistently, based on everything I hear from people, I think we have the opportunity to get this place to grow a lot. This is just the beginning. But we want to make sure that whatever we do, we do it really, really well.

BR: We just launched brunch on the rooftop a few weeks ago, and it's starting to get some traction. You have to pry people away from their regular brunch spot, so it's going to take a little time to get more people aware that we have this awesome brunch overlooking the city.