Share All sharing options for: Umberto Gibin of Perbacco 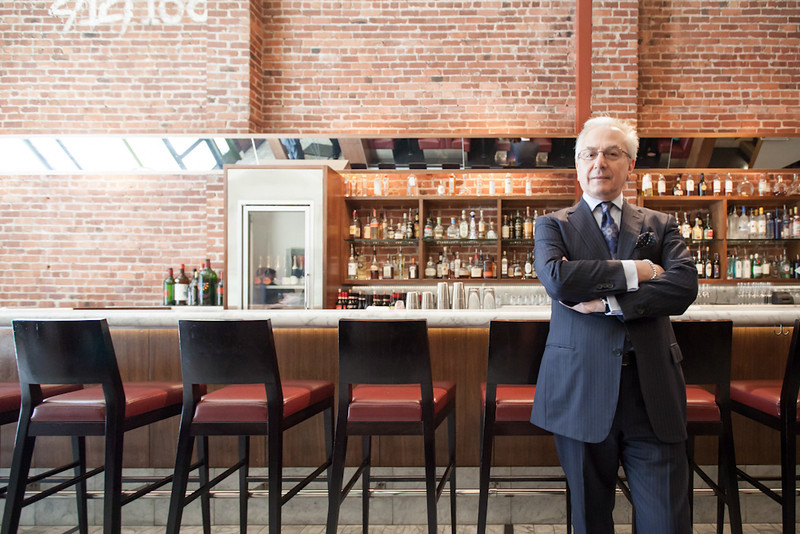 Umberto Gibin has been welcoming diners into Perbacco since it first became one of the Financial District's hottest spots seven years ago. But the dapper proprietor and host has a history that goes back even further: he's been an integral part of San Francisco's network of high-end Italian restaurants since arriving from his native Italy in 1979. We checked in with Gibin to discuss old-school Italian restaurants, bad manners, and how dining in San Francisco has changed over the years.

How did you first get interested in the food world?

Umberto Gibin: Being in the restaurant business was not even remotely in my plan. When I was finishing high school and I had to decide where to go, I wasn't very studious, and I knew that. A teacher told me to go to hotel school because it would offer me an education and a trade, and the possibility of travel and languages, which I loved. And then I found myself in hotel management school. My first job was over summer vacation when I was 14. I asked to go to Germany to this beautiful hotel. And when I entered the dining room I said, "Wow. This is it." And I never left.

What brought you to San Francisco?

What really brought me to San Francisco was a young lady that I met on board a ship. [Laughs.] And then what kept me here was the amazing city.

What did you do during those years after you arrived?

UG: My very first job here in San Francisco was at the venerable Ernie's, which is now closed. It was the oldest bastion of fine cuisine and European service and so on, on Montgomery and Pacific. After that I worked also for the Donatello Hotel and Restaurant, which was the best Italian restaurant in town, but again, very fancy. Giancarlo Paterlini, who's now the owner of Acquerello, was the manager then. He worked at night, and I worked during the day.

In between, I also worked for Ciao, where I met Larry Mindel, who everyone knows, and began to work with him. He's the father of the Spectrum Group and then Il Fornaio, and the owner of Poggio. From Ciao, I went to Los Angeles to run the flagship restaurant called Chianti on Melrose, and from there I became director of operations for the five properties we had down in Southern California. In 1996 the company was sold and Larry Mindel acquired Il Fornaio, which at the time the was just one eating facility, the rest were all bakeries. So we started Il Fornaio's restaurants.

Kimpton was the last company I worked for, first as a general manager at the Grand Cafe and then director of operations for Masa's, Fifth Floor, and others. I left in 2004 with the idea of opening this restaurant, but I was really scared. Thank god for my wife and friends that said, "Come on, come on, let's do it."

What was the original concept that inspired you to open Perbacco?

UG: Staffan Terje was still at Scala's, and when I was thinking of someone to partner with, I couldn't think of any better person. When we met to discuss the concept, both of us had the same idea: to present a restaurant with the cuisine of Piemonte. Here in San Francisco there is A16 with Campania, Pesce with Venice, so we wanted to open a restaurant focused on the cuisine of Piemonte. I lived there since I was a little boy of six years old, although I was born in Venice. I lived in Torino, so I'm familiar with the cuisine. And on Staffan's side, he just loved the region and what it has to offer, from the salumi to the wines. Also, the cuisine is a little more sophisticated than other cuisines of Italy, perhaps because of the proximity to France, perhaps because Piedmonte was the house of the last royal family. And, of course, there are the truffles. Altogether, there is a little more intrigue in the cuisine, and that's what we wanted to do. And the concept was born.

What does a typical day look like for you?

UG: I come in around eight o'clock in the morning, look at the reservations, see who is coming in, and assign the tables, because they all have their favorite tables, of course. I plan the day, and at 11:30 we open the restaurant. My job is not only to make sure that the operations run smoothly, but also to greet everyone that comes in, take them to the table myself at times, and recognize everybody and make them feel important. I spend a little more time here than next door [at casual sister restaurant Barbacco], but I divide my time between the two. And then there's dinner, which is a little bit different, and the clientele is different. So I'm always trying to make sure everyone has a good time.

What kinds of VIPs have you seen come in over time?

UG: We do have our share of artists that come in, actors and singers, and then of course there the society people of San Francisco, and the politicians. We are one of Dennis Herrera's favorite restaurants. Kamala Harris does take-out on a regular basis. And then you have not only the socialites, but business people. And that is what my job is, because I don't expect my younger servers to know who these captains of industry are. That's why I read the magazines, I read the San Francisco Business Times, and I memorize their faces, because when they come in, I'm going to make sure that they are recognized.

What are some of the different ways people try to bribe you to get a table?

UG: Well normally, it's money, which I don't take, obviously. And other times if they don't know who I am they drop names. Sometimes they say "I'm a friend of Umberto." Really? Nice to meet you!

Obviously, you're very well-dressed. How much does that figure into the job?

UG: It's really what I feel like wearing in the morning. On Saturdays, it's a little more casual, so I don't wear a tie. Still a suit, but no tie. Ultimately, it's what makes me feel good. I don't do it because of the restaurant, it's when I look at myself in the mirror and I feel like I look good, then I'm ready.

How many sets of cufflinks do you have?

UG: I can only guess...I believe it's between 40 and 50 pairs. I think it's one of those things that you just want to keep on buying. You never have enough.

Do you have any pet peeves about diners?

UG: One of my worst pet peeves is when a gentleman comes in with a baseball hat and he keeps it on for the duration. That really really bothers me, and more so when it's a family, because then I blame the parents. Right now what I hate the most is cell phones. I see couples that don't even talk to each other. One is over there on Facebook or wherever, and the other is somewhere else. They're constantly on the phone. I really don't understand it. When you're at the table, look at each other and talk.

How do you feel like the dining landscape has changed since you began working in San Francisco?

UG: When I first came here, you had very high-class restaurants. Ernie's was one, Le Trianon, La Bourgogne, L'Etoile, and then you had bistros. There were no Spanish restaurants, not a lot of Japanese. And the Italian restaurants had these long menus, with spaghetti and 300 sauces. It used to be kind of conservative going out. It wasn't as casual as it is now. But then the clientele changes, and the new generation takes over. The old-style cuisine may still be popular, but everyone today is more travelled, they go here, they go there, and they are more food-educated. And then they come back and they demand more. Also now you see larger spaces, more minimalism in the decor...really open spaces where everyone can see each other and be seen.

What are some of the places that are your go-to spots to go when you're off duty?

UG: Obviously, you're trying to go to every new spot and see if you can learn something. As of late, of course Coqueta is the newest thing, I've been there two or three times. I went to State Bird Provisions, when it opened, to Hakkasan. I tend to go to not necessarily the same style of restaurant as we are, because obviously you can learn new things from many other places. I like places that are interesting, both in decor and concept. In the East Bay, the selection is more limited, but I go around my neighborhood. Wood Tavern, now A16 that just opened over there, Oliveto, the Ramen Shop in Rockridge.

What are the best parts of the job?

UG: We have guests that stop me on the way out and they tell me about the experience, how wonderful the staff is, how great the people are. Then you share that with the staff and say "That's what we're here for." These are the things that of course make you get up the next day and say, "Let's do it again."