Belinda Leong of b. patisserie

Share All sharing options for: Belinda Leong of b. patisserie 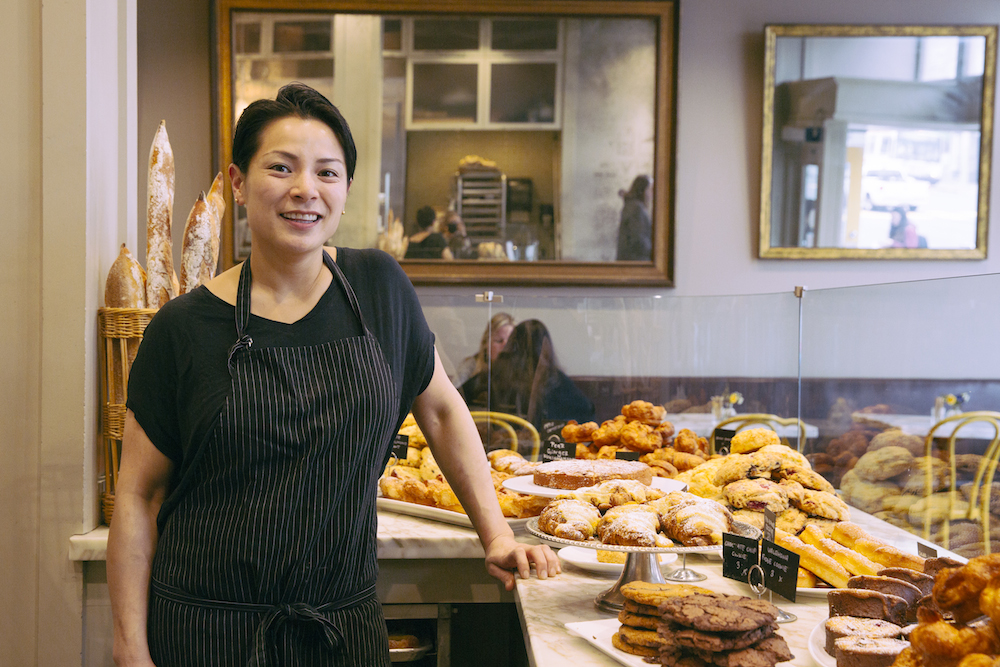 After pastry-chef stints at Manresa, Gary Danko, and Paris' famed Pierre Hermé, Belinda Leong realized a longtime dream last year by hanging out her own shingle with b. patisserie. Alongside partner (and San Francisco Baking Institute founder) Michel Suas, Leong quickly developed a city-wide following for her killer kouign-amann, sugary croissant-like pastries that hail from Brittany. Her more complex desserts also earned raves from every single one of the city's critics, and her bakery now attracts a sizable crowd of regulars in search of their pastry fix. Just before her one-year anniversary party (which doubled as a preview of her 2014 creations) kicked off, we caught up with Leong to talk about coping with sellout crowds, handling the spotlight, and the importance of a good chocolate-chip cookie.

Today's your first anniversary. If you could have told yourself a year ago what you knew now, what would you say?

It's funny—I don't have any complaints about this year. It's been a great year. I have a great business partner who's experienced, so that helped in kind of foreseeing anything that was going to happen down the line. We took baby steps. We definitely had some hiccups, production-wise, though. In the beginning, it was really crazy. We were in such small quarters, and we didn't have an oven on-premises. But this year has been pretty cool.

Why didn't you have an oven at first?

It had to do with the fire code. We didn't have it for the first month, so we had to do production at Michel's baking school. That's why we ran low on product in the early days: we couldn't bake on-premises, and we ran out of things really early. It was really hard to bake in South San Francisco and then bring everything over for the whole day for service.

How long did it take before you got that dialed in, and you were able to stop selling out of things all the time?

Probably three or four...um, maybe actually five or six, months. [Laughs.] We've been gradually getting busier, and that makes it hard. Every day ends up surprising me. Some days we sell a good amount of desserts, and some we don't.

So, obviously, the kouign-amann are never coming off the menu.

Aside from those, what are some of the other items that have done really well?

The whole viennoiserie section is doing well. Almond croissants. Scones...I'm just amazed how many scones people eat. We probably make five or six types now, and we sell out of them every day. Our bostock is also really popular.

Does that mean you get a lot more to-go traffic, compared to people coming in and eating a plated pastry?

I'd say it's 60-40 to-go. But a lot of people do like to have a pastry and sit down with a cup of coffee, and the same with sandwiches. We have limited seating, though, so that's been hard.

We've been really fortunate, actually. Customers seem to trust us. We've had a lot of new creations come out, and we have yet to have one where people say "Oh, I don't like it," and it doesn't sell. Which is good.

Do you have regulars?

Yeah, it's amazing. Some people come every day.

Have they gained 15 pounds by now?

[Laughs.] Yeah, and they tell us that. We're like, "Um, okay..." And then we get people who come in every Sunday—it's their new tradition, that they're always here on Sunday. A lot of neighborhood people come in five or six times a week, too. They're a big part of our clientele.

Besides not having that oven for the first month, what have been your biggest challenges?

The limits of the space. [Gestures to kitchen.] What you see here is the only production area that we have. All the products are created right in front of you. That gets really difficult, because refrigeration and freezer space are at a premium.

Are you considering any options in terms of expanding your space, or getting another space?

Production-wise, yeah, if it's feasible. It would have to be close by. And that's hard, too. I don't really like to produce off-site and then bring it over here. As spaces pop up for production, we may look at them. But for right now, we're just trying to see if this level of business stays steady. If we keep growing like this, then yeah, we'll definitely have to look outside for more space.

Given the space constraints, is it hard to do special orders?

Definitely. Even the holidays are tight. This year, we had a lot of people order desserts for Christmas and Thanksgiving, and now we're right in the midst of Valentine's. And now it's wedding time, and the calls have started. Not for cakes as much as for small desserts. People have asked us to do a few big events, too, with 10,000 pieces, and we just have to say no. We can't do that. We make everything by hand, down to the scones. We don't use too many machines.

What was the most gratifying part of this year?

Seeing how happy the customers are, and all the different customers we get in the shop. We get all walks of life here. It's great to see the kids come in from the high school, and the new parents with their babies. The fathers with the baby Bjorns. People have business meetings here, too. When they leave happy, that's such a great feeling. "They're eating my food, and they're happy!" It's kind of cool that I'm the one doing that.

You've gotten a lot of attention this year, and I know you're a little shy. Has that been a lot to handle?

Oh, I'm still very shy. I'm not very good at it at all. I really like to just be in the kitchen and cook. I don't know if I'll ever be able to get used to it. I certainly haven't gotten used to it so far.

Let's talk about some of the new stuff you're introducing this year.

We've got a few new kouign-amann flavors coming up, since we change the fruits seasonally. Right now, we've got pineapple-pink peppercorn, chocolate-hazelnut, and a three-fruit one. Valentine's is right around the corner, and instead of a box of chocolates, we did a chocolate macaron box, in the same setting as you would chocolates. And since people love the kouign-amann, we made a big one for two, so that they can cut it and feed each other. For Thanksgiving, we're going to move away from pies and turn them all into tarts—our version of tarts. And we're introducing themes. One of them will be eclairs.

Will that happen in a certain month of the year?

March or April, probably. We're probably going to have five or six different flavors of eclair. One of them is based on a Whatchamacallit candy bar. I love to play on familiar flavors, using different textures. It was the same thing with the Oreo macaron and the Snickers macaron. It makes things approachable to people, which is what I always wanted. I don't want people to be intimidated coming in here, thinking it's really French. It's good to have some fun kid flavors.

Is it stressful to plan all of this so far in advance?

Oh, it's so much fun! Sure, it can be tough: with this batch, we were like, "We just did this in the summer!" But when I was at Pierre Hermé, he did this every year. He'd invite VIPs and press to come in and see what the new collection would be. I always loved that, and no one here is doing it, so I thought we'd try it. It's fun for us, too. We always want to have something coming up, and keep things moving.

Anything else exciting planned for the coming year?

We're going to try to get more into teatime. We have our wine license, and we do want to start serving wine. And we'd like to open at night on weekends to do plated desserts, for people to come after dinner. My background is plated desserts, and I definitely want to bring that in here. I think that'll happen in the next few months. 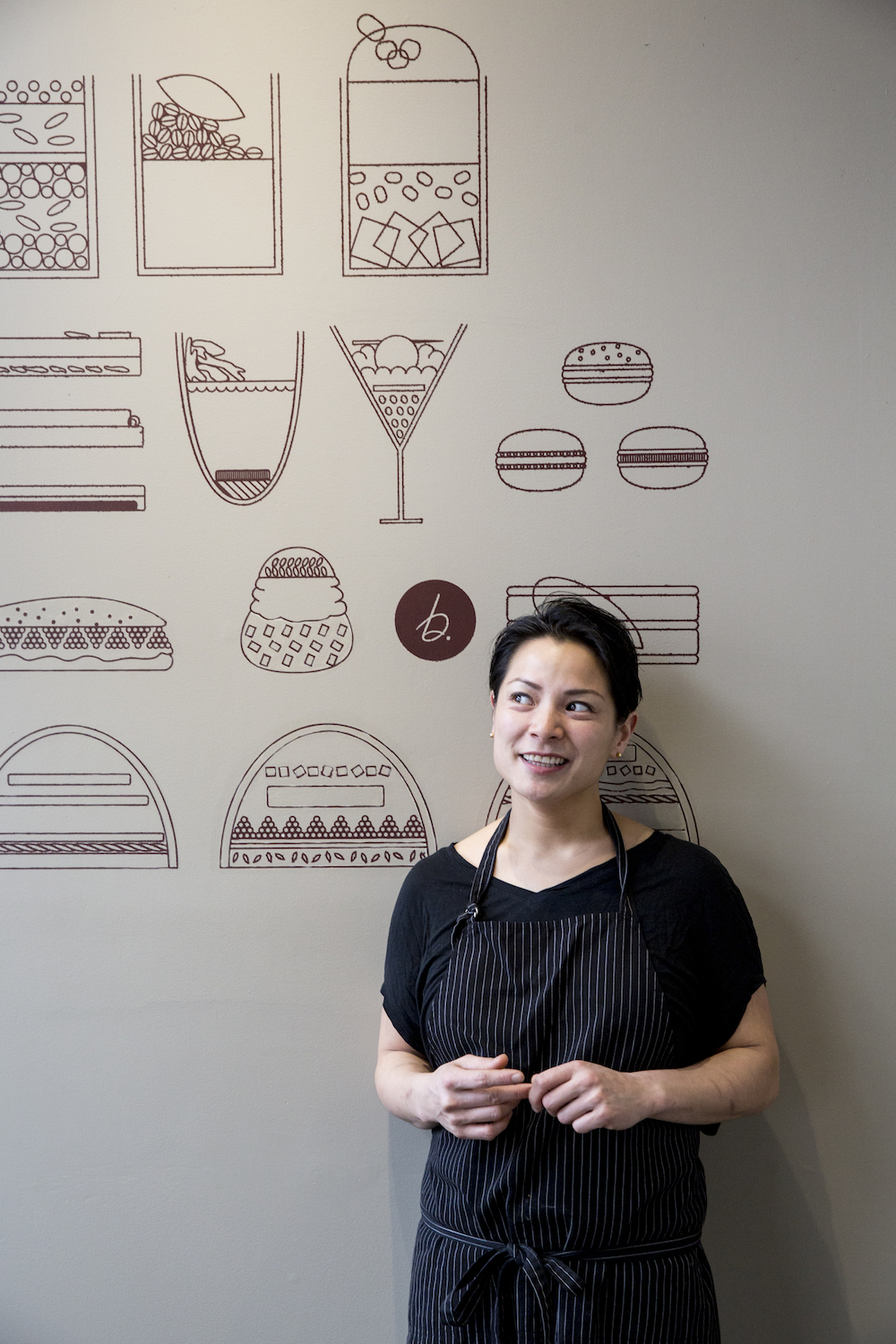 You always have the macaron tree hanging in the back. How do you keep those from disintegrating?

Have you had issues with people trying to pluck macarons from it?

Yeah, people touch it! And they let their kids touch it! It's weird, because it's meant to be art, and people don't normally touch art. That sometimes cracks the cookies, and then we replace them. Same with the macaron trees and balls, though sometimes we spray them with luster.

Your work is really labor-intensive. What's the most time-consuming or stressful thing you make?

The desserts are pretty time-consuming. That's why they don't come out until 10 or 10:30, because there are all those little finishing details to do in terms of decorating the cakes. This whole display got started at 4 this morning. It took so long to do all the little eclairs and little macarons. But that's why I wanted an open kitchen. It's fun for people to see the work that goes into the food, and all those little details. They feel like a part of it because we're doing everything in front of them.

When you indulge in a treat, what's your favorite thing to eat?

It should be chewy in the center, but with crispy edges. The top should be crispy, but the inside should still be soft. There should be a crackle, sort of like a caramelized-sugar crackle. And the chips should be big.

You've put a lot of thought into this!

Oh yeah, I knew exactly what I wanted. Michel and I had my recipe, but I wanted to fiddle with it. So we looked at it and took it apart—changed the egg, the yolk, the flour. You wouldn't think that it was that difficult.

But that level of thought goes into everything here.

We definitely try to make it that way. But it's funny: sometimes the simplest things are the hardest.