Welcome to One Month In, a feature in which Eater sits down for a chat with the chefs and owners of restaurants that have just completed their first month in business. 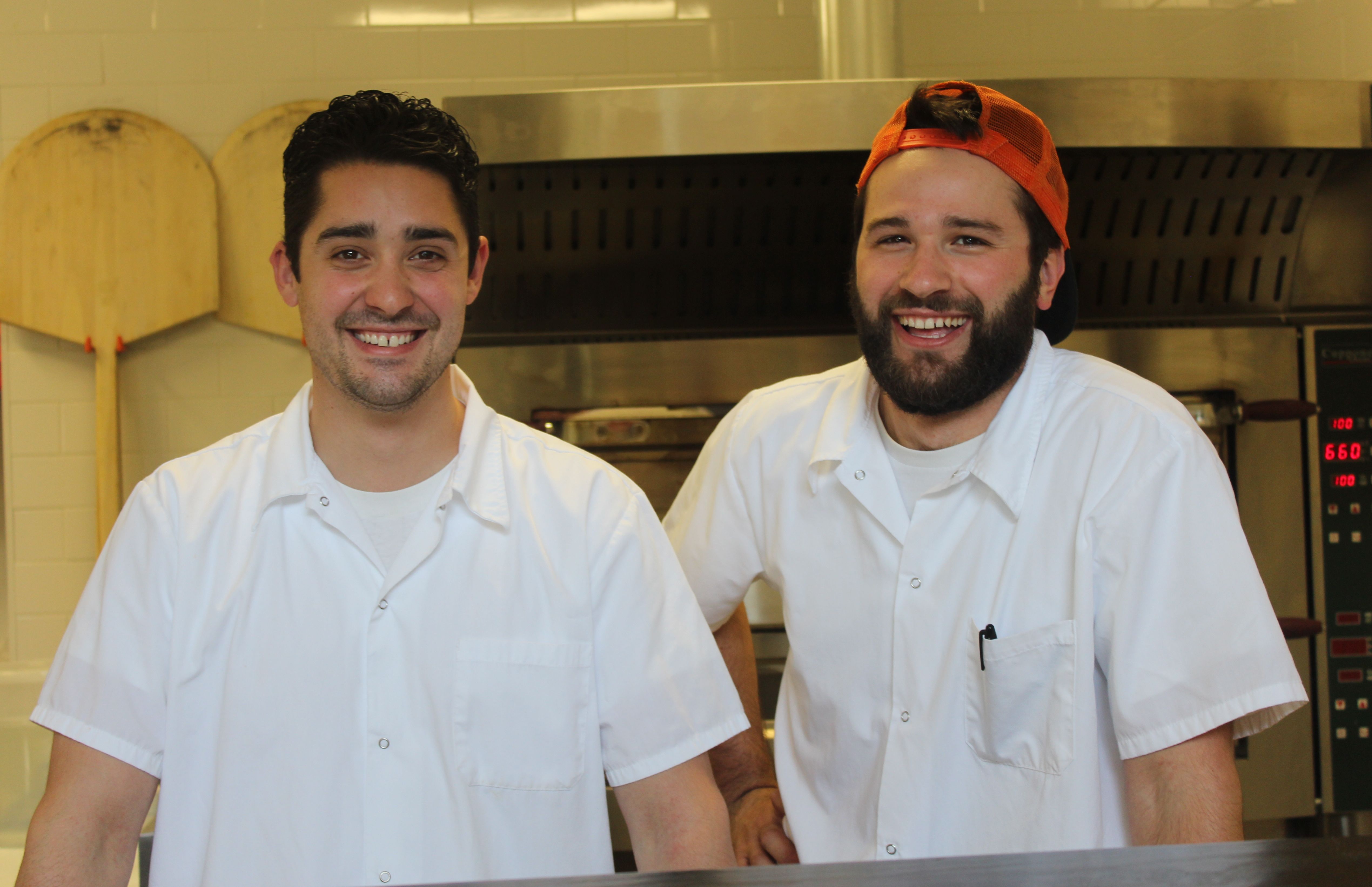 For many pizza lovers, opening a pizzeria of their own is a dream, but the reality can be far more expensive, stressful, and intense than they ever realized. To find out what it's like to run a new pizzeria, we turned to first-time restaurateurs Neal DeNardi and Andrew Markoulis, whose Long Bridge Pizza launched in the Dogpatch just one month ago. Friends since high school, the Peninsula natives have collectively cooked at A16, Tony's Pizza Napoletana, and with PizzaHacker's Jeff Krupman. In a brief break from their all-consuming new jobs, they chatted with us about finding cooks, dealing with paperwork, and the joy of making friends in the neighborhood.

I know it's stressful right now, so thanks for taking the time to talk.

ND: Well, actually, Andrew actually had to run out. So it's just me for now.

OK, then! If you could describe the past month in one word, what would it be?

What have you learned now that you didn't know a month ago?

I guess I've learned that finding cooks—ones that you can rely on, ones that are dependable—is tough. They're few and far between. And once you get one that you can rely on, it's really important to keep them. I'd been fortunate enough to work at really good restaurants, with really good people. I thought the type of people I was working with fall off of trees, and they don't, at all. In kitchens, you're always looking for hardworking, reliable people who are willing to learn and take that extra step, but this was an eye-opener. We've got a solid core going, 4-5 guys, but honestly, we're lucky to even have them. It's been really tough. It's a process, finding them.

What's been the effect of that on the restaurant? How much are you and Andrew stepping in yourselves?

Andrew and I always assumed we'd be on the line for every service. Before we opened this place, we knew we'd be on the line six days a week, for two services, and we were both prepared to do it. The problem is that we haven't been able to grow into what we eventually want to be. If we stay where we're at now [in terms of staff], we won't become what we want. Wait times have been a little bit longer than we'd like, and we want to have our extra service to the neighborhood bars, and get delivery to them, and we just haven't been able to do that. We have our solid crew, but we want to take it up that extra notch. In the long run, though, that might be a good thing. Since it's our first restaurant, and we've only been line cooks, it keeps the pace reasonable.

How much practice did you get on your oven before you opened? Are the pies coming out the way you want them?

When I cooked at Tony's, I got some practice on our oven, because it's one of the ones he has. But he has eight ovens, so I only got to rotate on it every once in a while. [Laughs.] Whenever you're cooking different doughs in different ovens, it's always a whole new ballgame. We have an electric oven, which is due to our space and the way our ventilation works. We can't have a gas or wood oven.

I tested ovens with Jeff Krupman from PizzaHacker, and then Andrew and I tested it out at the showroom and made pizzas, 20 or 30 pies to see if it worked. We got it shipped, and that was one of the big mistakes we made. We had our oven six months before we turned it on, which...that was definitely a teaching moment, because we didn't need that oven delivered as quickly as we did. We tested it for maybe two weeks, and then got after it. You always need to tweak your dough a little bit for the type of oven and how hot you want to cook your pizza. Our oven gets to 850 degrees, but we're not cooking at that heat level. But we've played with crispiness and hydration, and pies are coming out really strong. If a pie doesn't come out the way we want it, it's definitely not the oven at this point, it's the batch of dough.

Do you want to grow your menu?

Yeah, absolutely. Right now, we're only offering six pizzas and a rotating special, something seasonal. We have a chef's garden growing, and last week, we harvested some kale, so we ran that for a few days. But we want to get up to where we can have 10 pizzas permanently on the menu, plus that seasonal special, two salads, and maybe a baked appetizer or something else fun. Hopefully we can grow that soon.

It's in Redwood City.

Have you had it for a while, or did you have to build it simultaneously with the restaurant?

It kind of just came about. We put some seeds in maybe three months ago, and harvested some spinach and kale last week. As the year goes on, we're hoping to add basil, parsley, and tomatoes in season. Leeks, maybe some rapini. Simple things like that. Our menu's pretty limited, so whatever we get, we'll incorporate. We're lucky enough to have our friend Kim Gomes, who used to be in charge of the Chronicle's rooftop garden, spearheading that effort for us, and also doing some of our marketing and PR.

You and Andrew are old friends. Had you been co-workers before?

Not really. We went to high school together and we were roommates in college, so we had some of that dynamic of being around each other and going through the stuff that roommates do, but we didn't work in kitchens together, for the most part. We did work on a pizza food truck in the city for a few months together, and that's how we built a dynamic working together in a kitchen for the first time.

How has running a business together affected your friendship?

It's been a positive thing, actually. We've been on the same page of being open to ideas, because it's our first time doing something like this. We certainly have a general sense of direction of where we want to go and what type of pizza we want to sell, and we're on the same page. But neither one of us takes a hard stance on anything, because we haven't opened a place before and think things should be done a certain way.

When we talked about opening this place together, that was one of the main things, that our philosophy was not to be too strongly opinionated on things, open to new ideas, learning. We get so many ideas from friends, family, and other people, and we just nod our heads and say "Yeah, yeah," but in the back of our minds, we're thinking, "Oh, wait!" We've gotten great ideas from people who have no experience in any restaurant setting.

How has the response from the neighborhood been?

It's been great! It's funny, because so many people have come in and told us they live "just around the corner." We've been joking, where is the corner that all these people live at? Literally every person who comes in: "Oh yeah, I live here, right around the corner!"

We've gotten such great support from the industry here. People who work at Dogpatch Saloon, Triple Voodoo, Gilberth's, The New Spot, Serpentine, Mr. & Mrs. Miscellaneous, the new Magnolia brewery, they've all been in. That's what's great about this neighborhood—everyone supports each other. It's up-and-coming, and no one feels threatened by anyone. We all want the Dogpatch to grow into a great neighborhood, and we're on the same page about that.

What's been your most popular pie so far?

People have really been big on the Loading Dock, which has tomato, garlic, thyme, mozzarella, sausage, mushrooms, and sopressata. Our white and sausage pies are also really popular, but since we added the Loading Dock, it's stolen some of the sausage pizza's thunder. When people want a hearty pizza, which a lot of people do, it's the one they order.

You don't have a wine and beer license yet. Is that something you're working on?

Yeah. We went down to the ABC last week and got a few of the extra forms we needed, and we'll have it submitted by next week. We're looking at three months' wait after that, but we're not too worried, because we have so many things we still need to hammer out and systems we need to put in place. Bringing in alcohol might mean that we have to reconfigure the kitchen and the front of the house. We're working on it, but three months will be about perfect in terms of timing and having our systems in place.

In the meantime, we've been in contact with Triple Voodoo, Dogpatch Saloon, and Third Rail, and they're all totally fine with people bringing pizza into their establishments if they want a drink. Because we've had people walk in and say "You don't have booze? OK, I'll come back when you guys have it." And I totally understand that: they want a glass of wine or a beer with their pizza. Our goal, in the future, is that someone at Triple Voodoo can just call us and we'll run a pizza down to them in a warmer, have it served on a tray so it's nice and neat without that big, bulky box and they can enjoy it at the bar.

Where in the Bay Area do you guys like to go for pizza?

Two places. Emilia's in Berkeley, and then the best would be from the PizzaHacker out of his old Frankenweber oven—when it's working correctly. When that oven's on, I think that's the best pizza in the Bay Area. Even though he doesn't do it anymore.

To wrap up, what would you say, right now, is the absolute worst part of your job?

All the paperwork, all the taxes, all the stuff that's not in the kitchen, with the staff, making pizza. The things that aren't cooking. Going down on the T to Montgomery to the ABC, which is just a nightmare: people everywhere, and no one wants to help you. Meeting with your bookkeeper, looking everywhere to find receipts that are in different binders and briefcases. But you sign up for it, and we understand that.

And what is the absolute best thing about your job, that makes you look forward to going to work every day?

Seeing the process in motion. Getting into the pizzeria early to prep, having the other guys show up, Andrew show up. Getting into lunch service and seeing the team work together, helping each other out when we need it. Looking around the dining room, and seeing the expressions on customers' faces while eating the pizza. And having them come up to us and tell us how much they enjoyed their pizza. It's really rewarding, and really the best part. Working towards something, accomplishing it, and seeing it pay off with customers telling us how much they enjoyed it. That's what it's all about.