Eater SF's house sommelier Courtney Cochran, author of the Hip Tastes book and blog, checks in with a special Pizza Week installment of The Swill. 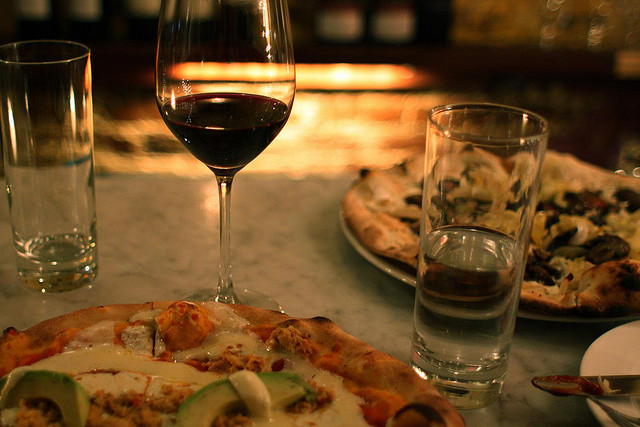 Red wine-with-pie haters. Beer advocates. Coke devotees. We were shocked to hear that many of our most esteemed somms and pie experts actually prefer a multitude of quirkier-than-wine pairings for pizza. Below, greasy details from the sommeliers of A16, Michael Mina, Flour + Water, and more.

Josiah Baldivino, Mina Group and the forthcoming Bay Grape: "When in doubt, just crack a bottle of Lambrusco." He points to Pilsner as a great foil to pie without overwhelming flavors, and adds that, if wine is a must, "if you want to make things interesting, crack a bottle of Nielluccio, Cannonau and/or Gueuz." Oaklandites can score tricky-to-find pours such as these at Bay Grape come summer, where most bottles will be in the pizza-friendly $15-30 range.

Baldivino knows whereof he speaks: he took his love of pie to new heights when he proposed to his now-wife, Stevie Stacionis, via pie toppings at Lucali's, in Carroll Gardens, Brooklyn. "The owner spelled 'Will you marry me?' on the pie using portobello mushrooms. We drank '96 Tattinger Comtes Champagne with it," he shares.

Eater SF: What pairing do people always try to order with pizza?
TG: At Pizza Rock Sacramento, ranch [dressing].
ESF: What do you wish they would do?
TG: Not order it.

Geno Tomko, Flour + Water: Flour + Water's brand new wine savant, Geno Tomko, is quick to point out that wine and pizza aren't the happy bedfellows most believe them to be. "I'm confident to say that wine is the ugly stepchild in regards to pairing with pizza*. The hardest thing is [what should be] simple: pairing red wine with red pizza. Mostly because of the acidity in the wine vs. the acidity in the tomato, as well as the sour twang that lives in the crust. In Naples, what do they drink with their pie? A light beer (Peroni) or coke. Not many Italians are ordering Aglianico, which is the noble red grape of Campania, with pizza. That's because it's not good together, plain and simple."

His recommendations: beer ("Pass on the hoppy ones. Go for something like a Pilsner, Kolsch, lassie lager, or light Dunkel"), sparkling red wines ("Lambrusco and Vernaccia are killer with pizza"), or fruit-forward reds ("Barbera and Ruche from Piedmont; Zweigelt from Austria, Nero d'Avola from Sicily"). Oh yeah, and don't order a Barolo. "Any tannic red just fights the flavor profile of most pies."

Shelley Lindgren, A16/A16 Rockridge/SPQR: James Beard bridesmaid Lindgren's fifth consecutive nomination for her wine program at A16 just came in, and her pizza-pairing savvy has never been hotter. Turns out she's definitely a wine-with-pie devotee, but also points to the tradition of soda and suds in pie capital Naples. "There are famous pizzerias in Napoli where only marinara and margherita pizzas are offered. Usually beer and soda are the only beverages offered (beer is often cheaper than soda, or the same price)." The issue, she says, is that "tangy and sweet" marinara sauce makes for a tricky pairing partner. There's more flexibility with pairing when toppings come into consideration. "Some wines really sing with particular pizzas, especially if there are additional toppings like an egg with the mushroom pizza, arugula with romana or pancetta with the Bianca."

That said, in Naples, there are some wine-and-marinara solutions available. "There are plenty of pizzerias where wine is also served...It's fun to pair with a local red fizzy wine called Gragnano. It's not only economical; the sweetness of the tomatoes washed down with [the wine's] grape-y, juicy and effervescent quality is delightful. Marinara is great for white wines too, especially dry and crisp wines like the local Campania Falanghina or Greco di Tufo."

Kevin Rogers, Nico Wines: Kevin Rogers' boutique Geyserville label Nico focuses on Italian varietals, and he says a wine's pH level is a key consideration when it comes to pairing. "pH is a great indication of how acid-driven or base [a wine] is. Lower-pH wines have more acid, and that acid does a great job clearing your mouth out for the next bite, as it makes your mouth water."

For those who geek out on wine tech sheets, seek out wines with pH levels below 3.6 or 3.7. "Higher pH wines tend to have a longer finish," which can complicate pizza pairing matters. Rogers recommends steering clear of bigger reds like Napa cabernets, which stick around for a longer time after sipping. "If you're still tasting that finish when you're already onto your next bite, versus clearing out your palate before the next bite, it's not ideal" for pizza. Wine nerds, you have a new reference point in your quiver.

Michael Kanbergs, Campo Fina: Healdsburg's Michael Kanbergs believes there's harmony to be found where pizza and wine pairing go, although there are snags to be avoided when buying vino. "The toughest thing about pairing beverages with pizza is the expectation about what pizza is. When a rep or importer shows me a 'great pizza wine,' I get the feeling its code for, 'This is a cheap, shallow—even astringent—wine that works with a cheap, depthless food.'" Ouch.

He sees harmony in matches with plenty of acid and balance. "Most people like to eat copious amounts of pizza, and if there's anything out of balance, they won't eat more than a couple slices. Any beverage that accompanies should have as much balance—between acid, structure, and richness—as the pizza does. Beer is a great pairing, but so is Champagne." He prefers whites with pies, despite the traditional tendency towards reds: "People always try to order red wine with pizza, and in spite of what I said above, I think white wine is generally a better pairing."

To wit, in roguish fashion, he looks to California Chardonnay for pairing, especially with pies featuring hearty toppings. "Rich chardonnay—whether the richness comes from malolactic fermentation, oak, or extended lees contact—usually still features enough acid to stand up to the tomatoes on a traditional pie, but it also has that rich mouthfeel and weight that plays well with pork, mozzarella, and olive oil." We think this is a try-it-to-believe-it match-up. Game on.

Alder Yarrow, Vinography: Celebrated wine scribe Alder Yarrow, whose crowd-funded wine tome, The Essence of Wine, comes out later this year, goes for the pink. "Given the opportunity, I almost always order a rosé, and my favorites for pizza would be the wonderfully tangy pinkish orange wines from Puglia, made from grapes like Negroamaro. My other top choice, which tends to be a little pricier, are the red wines from Etna in Sicily." Our mouths are officially watering.

Turns out that Aleppo chilis and champagne can make even the crappiest delivered pizza the best meal… http://t.co/adKJxvxT93

Signing off, we'd like to say grazie to all who contributed.

*We'll note than in his original response, Gene capitalized "Pizza," just as many would capitalize, say, "God." Gene, we love that in your world, a pie is a proper noun.