China Live, the ambitious Chinatown project in the former Gold Mountain space that's sort of an Eastern answer to Eataly, won't land until February 2015, but the plans are already shaping up to be pretty serious. Tablehopper got a first peek at the space, which will feature two restaurants, a cafe, a market, a private dining room, and a theater with concessions. AvroKo, the high-profile design firm that did Michael Mina's RN74, is handling the space, with an industrial-cool decor based on a four-week research trip the team took around China with Cecilia Chiang.

On the dining side, the more upscale of the two restaurants will be George Chen's 42-seat Eight Tables, a high-end spot with two 12-course menus (one classic, the other modern) cooked by a duo of chefs sourced from Shanghai. Ingredients and preparations will be ultra-high-end, with the goal of attaining Michelin-star status. An attached bar and lounge will boast a retro '70s aesthetic. A private dining room known as Madame's Parlour will be adjacent to the space (and serve as overflow seating for the lounge when not in use), with a more classic chinoiserie look. 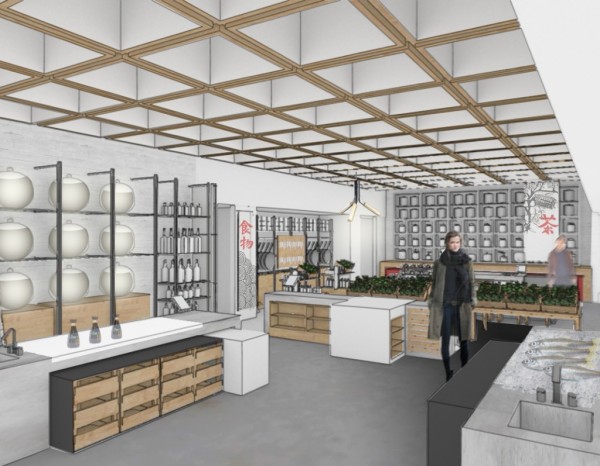 Downstairs, the plan is to open a 5,000-square-foot market, where shoppers can taste through and purchase various brands of soy sauce, tea, and condiments; they'll also offer cutlery and cookware, and demos on Chinese dishes, how to season a wok, and other topics for the home cook. The market will have a small cafe for tea and sweets and a casual 150-seat restaurant, with exhibition kitchens cooking up roasted meats, dim sum, noodles, and a rice table, with dishes spanning the various Chinese cuisines. Diners will be able to reserve a table, order, and pay entirely via their smartphones. As if all that wasn't enough, a 250-seat basement theater will feature concessions from upstairs, and there may be a rooftop dining area or bar in the works as well, although it likely won't open on time with the rest of the project. Expect China Live to arrive in time for Chinese New Year 2015; we'll have more as its debut approaches.