Welcome to In the Drink, where The Joy of Drinking's Noelle Chun gets to know the city's best bartenders and the philosophies behind their cocktail programs. 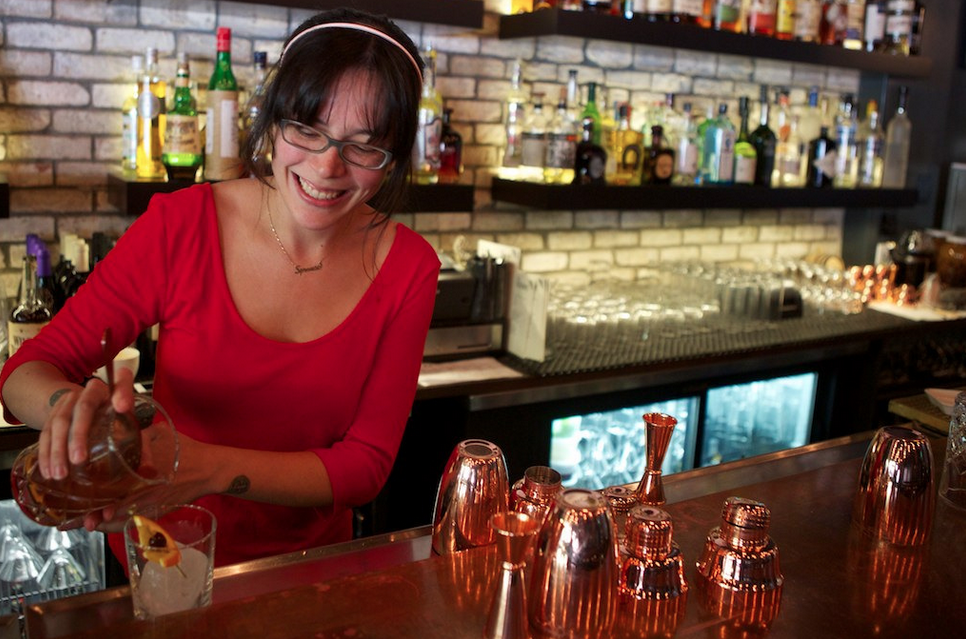 Claire Sprouse likes to refer to "the gesture of things," the idea that the core of any bar experience is making people feel at home by going above and beyond. It's what inspired Sprouse, an alum of Rickhouse and Tradition, in creating her latest bar program at The Square, the North Beach bar and restaurant from the team behind Sons & Daughters, where she was recently brought on as bar manager. Her goals: creating an emphasis on hospitality and spotlighting cocktails from the '70s and '80s that craft cocktail establishments often overlook—but that many of her customers know and love.

After all, the '70s and '80s were the glory days at the then-Washington Square Bar & Grill (otherwise known as the Washbag), when politicians, poets, writers, and other influencers hung out over cocktails, shared stories of living in North Beach, and even played on a softball team. "I've worked in Prohibition-era cocktails for forever, and I realized that more than classic cocktails, I wanted to emphasize the context of The Square," says Sprouse. "That is, the classic cocktails of the '70s and '80s—not party drinks, but what my mom and grandma would drink on a nice night out."

Which is not to say that Sprouse isn't adding her own flair to the cocktails. Her Appletini has no resemblance to the syrupy, neon-green concoction that most bartenders loathe; instead, it's a balanced, fragrant mix of Clear Creek apple brandy, fennel, lemon, honey, sour apple liqueur, and St. George absinthe. The Square's take on a Harvey Wallbanger subs a housemade vanilla-orange cordial for the cloying orange juice concentrate and Galliano, then adds some balance via Gran Classico (an Italian bitter), lemon and a choice of either vodka or mezcal (the tequila version makes it a "Freddy Fudpucker"). And she reclaims now-popular Old Fashioneds from Don Draper-aping hipsters who "drink the 1920s version like vodka sodas." Sprouse celebrates the '70s and '80s muddled version with bourbon, fruit, muddled fruit, and sugar—it's slightly sweet, less severe.

One of the stars of Sprouse's program is her eponymous Claire-ified White Russian, an inspired take on a clarified milk punch with rye whiskey or vodka, coffee, milk, and allspice. Sprouse makes it in batches, resulting in a clear drink that tastes of dry, balanced milk and chocolate without being too sweet.

While The Square's kitchen deliberately spotlights fresh, organic ingredients, many of which are grown on their own farm, Sprouse still considers hospitality the backbone of her program, rather than the drinks. "When I first got to San Francisco, I was like, man, the Kabuki [Theater] has a cocktail bar. What's going to set you apart?" she said. "It's easy to find good drinks these days. It's not as easy to find a place where you feel comfortable, a place to call your second home." Considering she's managed to both hold on to some Washbag regulars and create some new ones of her own, it's clear she's doing something right.