Chris Cosentino on Boccalone, Porcellino, His Favorite Charcuterie and More

Share All sharing options for: Chris Cosentino on Boccalone, Porcellino, His Favorite Charcuterie and More 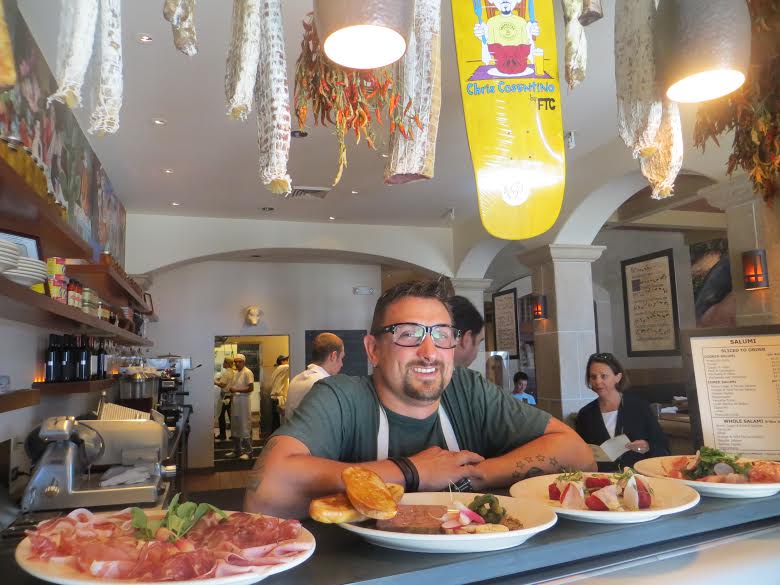 Boccalone, the salumeria founded by Chris Cosentino in 2007, now has two showcases: the original outpost in the Ferry Building, and new Noe Valley spot Porcellino, which took the place of Cosentino's breakout restaurant Incanto after its closure. Porcellino's doors swing open at 11 a.m., serving both grab-and-go and sit-down customers beneath a backdrop of hanging butcher knifes, racks of Italian wine and gigantic salumi prints splashed on the dining walls. While the Ferry Building location draws a constant crush of tourists, lunch-breaking locals, and everything in between, Porcellino—which means "piglet" in Italian—is a welcome respite to show off Boccalone's goods in a neighborhood setting.

Unlike most charcuterie programs around town, Porcellino encourages diners to customize their own salumi platters, big or small, by picking from the overflowing Boccalone selection behind deli windows. For the indecisive, Cosentino offers some solid backup options to Boccalone's salumi. In addition to ordering mortadella by the slice, diners can have it in hot-dog form, with whole-grain mustard and pickles. (Sophia Loren, whose La Mortadella movie poster hangs on the wall, would approve.) Cosentino also recommends the pâté di campagna, a menu staple. A play on a French picnic, it's served with butter, baguette, radishes and cornichons. The pâté itself, partly made up of liver, kidney, and heart, is cooked, chilled and pressed to bind it together.

Cosentino is a renaissance man, as evidenced by the skateboard hanging amongst his meats. He and buddy Kent Uyehara, owner of the famed Haight skateboard shop FTC, recently teamed up to make a Cosentino-themed skate deck, featuring the Top Chef Masters winner in cartoon form tucking into his favorite part of the pig: the head. They've already pretty much sold out in the past few days, says Cosentino, who's also tried his hand at fashion with a line for Betabrand. (His wife Tatiana, Boccalone's EVP, regularly sports prosciutto-printed socks he designed.)

Cosentino, who's best known for his work with offal, sees Boccalone as another extension of his whole-animal philosophy. He cultivated his salumi skills during his early days as Incanto's chef, experimenting with headcheese and pâtés and graduating into cured varieties. Colleagues and customers were enthusiastic, so he and Incanto co-founder Mark Pastore bought a small-scale meat processing plant in Oakland to handle the volume.

Boccalone was the first U.S. producer selected to work with the thick backfat from Spain's famed Pata Negra pigs, and Cosentino does it justice in his lardo iberico de Bellota. Its a nutty characteristics pair well with acidic fruit; one of Cosentino's favorite snacks is lardo wrapped around strawberries.

Cosentino has a soft spot for the odd parts of the pig, and revels in making things in the hardest way possible. (A history buff, his home library features over 1,000 cookbooks from various eras.) It shows in his porchetta di testa, which is a much more labor-intensive process than the similar coppa di testa. While the latter involves boiling a whole pig head, the former calls for butchering meat off the head perfectly (a tall order) and slow-cooking it for eight hours.

Cosentino's championed the tedious porchetta di testa for years now, calling it a beautiful mosaic of the ear cartilage, tongue, and jowls. He serves the delicate fat around a bed of arugula topped by capers and picked onions. The idea is to use the slices of porchetta as wraps, then fill them with the various fixings. Pig heads vary wildly in weight, from 25 to 95 pounds, adding to the difficulty of creating the dish.

Americans still love salami more than any other salumi or charcuterie, but Cosentino's high profile has allowed him to expand diners' horizons with more unusual cuts. At Porcellino, the salumi is sliced to order, with cooked options like prosciutto cotto and ciccioli. Cured salumi options include brown sugar and fennel salame, orange and wild fennel salame, lonza, and prosciutto crudo. It's wonder the skate deck has been such a hot ticket—with indulgences like this, you'll need a little exercise afterwards.