Share All sharing options for: Central Kitchen's Travis Day On The Snout-to-Tail Approach and More 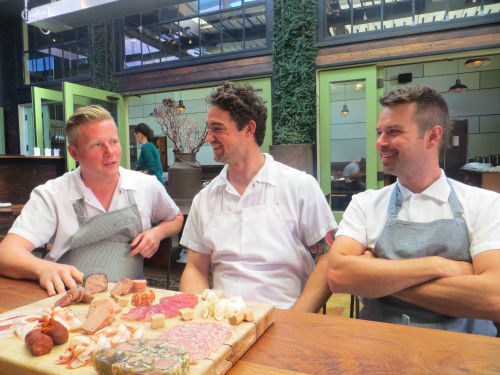 Beefing up the charcuterie program has been on the to-do list since Salumeria and Central Kitchen debuted two years ago. This fall, the two spots really got their legs with the addition of Travis Day, previously of Fatted Calf and Commonwealth. Day started with the Ne Timeas Restaurant Group (which also includes flour + water) as a sous chef in November, and has been focusing on the butchery programs for both Central Kitchen and Salumeria ever since.

Day's day job is to find a home for each pig part every week, when a new 200-pounder arrives on the 20th Street block that houses the group's row of restaurants. Salumeria and Central Kitchen share the same kitchen, and Day's challenge is finding creative ways to distribute obscure parts to each establishment to use 100 percent of the pig. Handing off prime pork cuts like loin to Central Kitchen is a no-brainer, but what about the actual brains? Day turns the entire head into either coppa di testa (cured with salt, fennel pollen, and aleppo peppers) or a terrine of head cheese. Before Day's arrival, the team struggled with what to do with the skin: now Day integrates it into his salami cotto, and bones are used as stock for Central Kitchen's sauces.

Since flour + water debuted in 2009, chef and restaurant group owner Thomas McNaughton has bought animals from Nicasio's Devil's Gulch Ranch. With Day on board, a steady parade of pig and rabbit are sent down from the Marin County ranch every week. Central Kitchen chef de cuisine Ryan Pollnow, who is helping oversee the program, is a big proponent of knowing the background of all the meat he serves, and the trio have been known to make the drive north to see what animals will arrive at their restaurants in the following weeks.

McNaughton's appreciation for pig runs deeper than just taste; if you visit the star chef's house above flour + water, you might meet his pet pig, Kona. McNaughton, a James Beard Foundation award nominee, has cultivated his long-running relationship with Devil's Gulch owner Mark Pasternak, in part, to stand by his brand's humane ethos (his dog Ellie is from one of Pasternak's litters, and he brings plants growing in Central Kitchen's open air space up to the ranch).

For his part, Day is impressed by the ranch's pigs for their nice fat-to-meat ratio, which makes them prime candidates for charcuterie without being overly fatty. Devil's Gulch rabbits also have starring roles on boards, shaking up the concept of traditional oink-infused charcuterie plates. Day's clever cuts of the mammal include rabbit salami with fennel pollen and rabbit pate with pine nuts and porcini puree (flour + water's interpretation of the meat may include rabbit fattisu with whole grain mustard and mustard greens).

But rabbit can hop off as soon as it hops on menus, since Devil's Gulch is one of a few ranches in the state producing fresh rabbits (many rabbits served in California are actually frozen and shipped from Canada) and demand from other restaurants is high. When McNaughton first opened flour + water, the wait for the Devil's Gulch delicacy was six months.

Cow also finds its way onto Day's charcuterie boards in the form of bresaola, aged two months with thyme, rosemary and garlic. One of Day's favorites is the coppa, a whole cured muscle taken from where the neck meets the shoulder. He calls it a "really well-marbled fat" and serves his version rubbed with chili flakes and garlic. Day's head cheese, in the style of jambon persille, is a gorgeous green gelatin suspending a sea of visible ears, tongue, cheek and cartilage, all flavored with a medley of herbs, chili flakes and lemon zest. Day also makes the uber-authentic Italian 'nduja, a spreadable thick pork sausage packed with heat from Calabrian chili (he looks up to Perbacco pro Staffan Terje—also on our Charcutiers list—who whips up the rare 'nduja too).

The team is already clearly sold on snout-to-tail concoctions, but getting customers to bite can be tricky. Sometimes the sell is all in the name; "head cheese" didn't do that well when it was on Central Kitchen's menu as a snack, but once the name switched to coppa di testa the orders came pouring in, says Pollnow. Mario Batali was onto something when he called his lardo "white prosciutto," adds McNaughton, but one thing is for sure: this team's meat-forward has already made a name for itself.