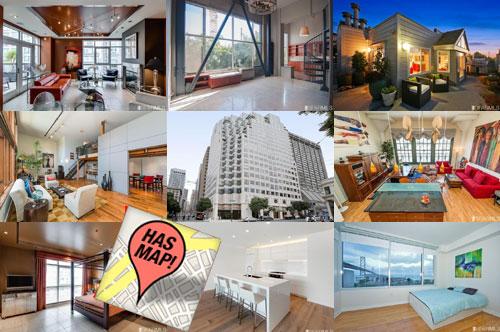 SAN FRANCISCO— Here now, a map of the most expensive one-bedrooms in San Francisco.

HAYES VALLEY— The new complex at 8 Octavia designed by local starchitect Stanley Saitowitz has set a new record for the most expensive listing for price per square foot in Hayes Valley history.

BAYVIEW— The historic Quinn House built in 1870 has finally sold for $401K over the asking price.

SAN FRANCISCO— We mapped the city's most iconic signs so that you can get nostalgic.

DOGPATCH— Avalon Bay is set to construct three new buildings for a combined 323 rental units that will be taking the place of San Francisco Opera's warehouse.

TREASURE ISLAND— Redevelopment of Treasure Island is back on track after controversy led to years of appeals in courts.

SAN FRANCISCO— Last week's three biggest sales have were a little underwhelming at a low of $3.2 million to a high of $3.625 million.