Share All sharing options for: Perbacco's Staffan Terje Breaks Down His Salumi Plate 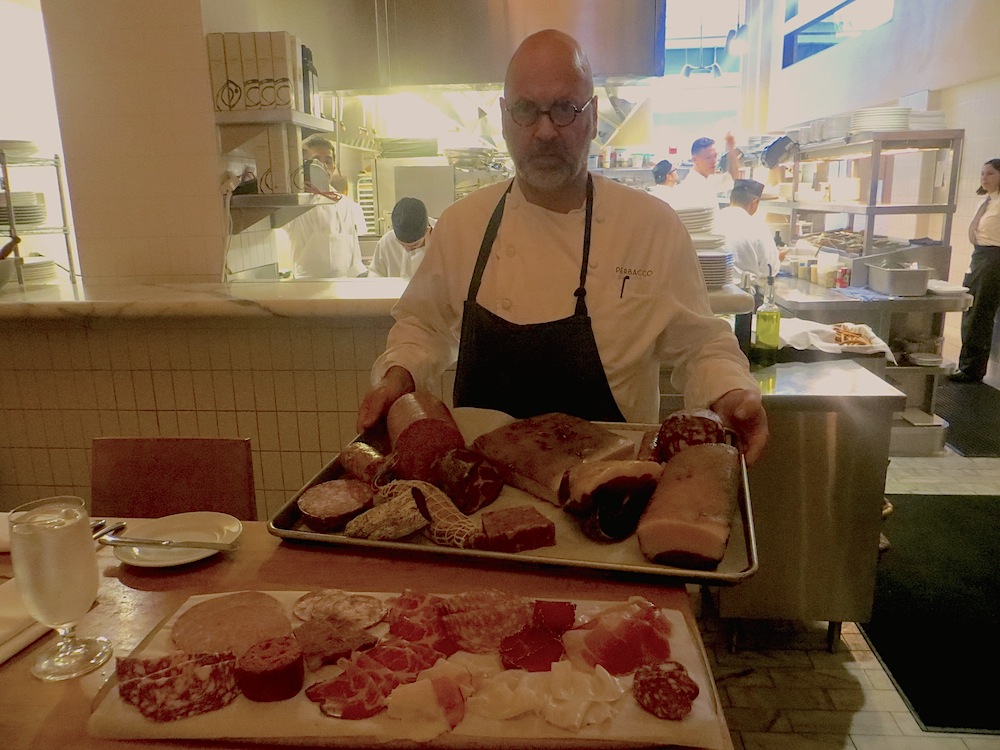 Before becoming a chef, Staffan Terje earned his meat chopping chops in Sweden, where he grew up on a pig farm and worked at a slaughterhouse. So it's no shock that since opening Perbacco eight years ago, Terje has earned acclaim for the housemade salumi that's brought him "full circle," as he himself says. (In the words of Jonathan Kauffman back in his SF Weekly days, Terje "just gets pork.") For the first edition of our Five Days of Meat series on charcuterie, we had him break down every item on Perbacco's plates, for a fuller look at what goes into each one.

Here's the lineup, with Terje's commentary:

Coppa, or pig neck, is cured with red wine and pepper and aged for three months. The pepper both preserves the meat (it's a natural antibacterial) and adds a musty, spicy bite to the edges of the sliced meat.

Culatello is basically boneless prosciutto, says Terje. While some restaurants use the biggest muscle in the pig (the hind leg) for prosciutto, it takes a lot of space to hang--not to mention time (up to two years). He opts instead for the center cut of the ham, which takes six months to age.

Making lardo is time-consuming enough that many chefs skip it. Good fat takes time to age (a year, to be exact) because it cures more slowly than muscle, which is mostly osmosis-friendly water. Terje goes against the grain, however, by making two types. His regular lardo is the pig's back fat, cured with sea salt, rosemary, black pepper and garlic. He uses very fat pigs for his lardo reale, which is an ode to the way the royals once ate. The loin is attached, so when the fat dries, the finished product has an almost jerky-like effect.

The only non-pig offering on the plate is bresaola, which consists of different muscle cuts from the hind leg of a cow that are soaked in red wine and rolled in black pepper. "This one's a bull, so it's darker meat and tough as hell," says Terje. "Even hung for 45 days, he was still gnawing. But that's the perfect condition for a great ragu or cured meat."

Nostrano, which means "ours" or "house," is Perbacco's traditional salami, done in a style typical of the Barolo region of Piemonte. The medium-ground pork is slathered with red wine and mixed with garlic, nutmeg, cinnamon, ginger, mace and cloves, then aged for six weeks.

Terje makes two different types of finocchiona, both of which contain wild fennel and red wine. The regular finocchiona is comprised of medium-ground pork aged for three months, while the sbriccolona is finely ground and aged for just three weeks. Because it's a lot younger, it's almost like a pâté. While other salumis are based on achieving certain proportions of fat, he calls the finocchiona more of a blend.

For the adventurous set, there's testa, or pig head. Don't confuse it with head cheese; because it's doesn't contain pig brains, it's considered brawn, not head cheese. The gristle (cartilage) and skin get their flavor from a simmer in spices, nutmeg, cloves and bay. They're then chopped and pressed into a terrine.

One of the rarest meat finds in SF is Terje's 'nduja, a spreadable sausage that originates in Calabria. It's made from extremely finely-ground pork, and spicy is the name of its game—Terje suggests saving it for last. Lots of chili pepper and oregano are involved, though he says it's not as spicy as the genuine article in Southern Italy. (Apparently "smoke comes out of your ears" after eating that one, though Terje's version certainly packs a good kick). While hasn't had time to go back to Italy for two years, he's hoping to make a visit later this fall. He says gets "inspired anywhere" in the country, but heading back to Sicily is definitely a must. We can only imagine what meaty delights he'll come up with on the return trip.