Fatted Calf's Taylor Boetticher on Sourcing, Butchery, and Why You Should Be Eating Goat

Share All sharing options for: Fatted Calf's Taylor Boetticher on Sourcing, Butchery, and Why You Should Be Eating Goat

Welcome to Lifers, a feature in which Eater interviews the men and women who have worked in the restaurant and bar industry for the better part of their lives, sharing their stories and more. This is a special Five Days of Meat edition. 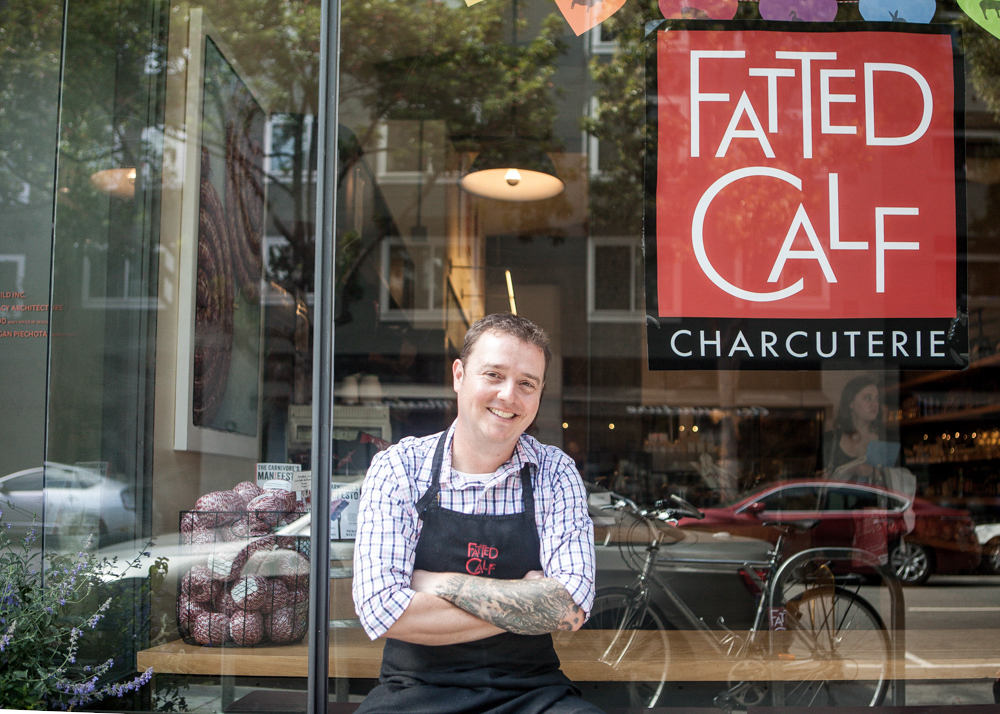 If there were a beauty contest for meat, the lineup at Fatted Calf would easily grace the podium. At its Hayes Valley location, burgundy prime rib from Five Dot Ranch, pâté loaves laced with herbs, and a medley of salumi freckled with fat all preen from behind a glass display case.

Married chefs Taylor Boetticher and Toponia Miller run this acclaimed charcuterie, butchery, and specialty shop/café, along with co-owner Heather Bailie. The couple met in 1996 at the Culinary Institute of America in Hyde Park. They moved to Northern California after graduation and spent a few years working in restaurants and running a small operation out of the Dogpatch before opening Fatted Calf in the Oxbow Public Market in Napa in 2008. The Hayes Valley outpost followed in 2010.

Between stuffing sausages, preparing twenty-gallon batches of bread and butter pickles, and overseeing butchery classes, Boetticher and Miller managed to put out a cookbook. In the Charcuterie, released last year, earned IACP and James Beard Awards nominations, and is now in its third printing. The couple also have a second book in the works. Over a plate of razor-thin roast beef, Boetticher talked to us about his commitment to ethical sourcing, the unsexy elements of running a retail business, and the animal he wishes more people were eating.

How did you get into charcuterie?

[After culinary school], I wound up meeting with a culinary headhunter—pretty much—who asked me what I wanted to do, and I wanted to work for a small owner-operated place doing rustic Mediterranean-Cal type fare. He put me in touch with Marsha [McBride] over at Cafe Rouge. I thought I was going to be applying for a line cook job, and it turned out she needed somebody to work in her little in-house charcuterie.

How long were you there?

I wound up staying there for almost five years. It was just really rewarding. Nobody else was doing that kind of thing. It was there that I learned about good pastured meat, dry-aging beef, classic charcuterie, and also just the rustic European sensibilities that drive our food now.

I'm a good cook. I'm a good bucher. I think my real strength lies in charcuterie—in the spices, in different preparations, in curing, and the interplay between salt and smoke and spice and the pig. I guess my title would be charcutier.

How would you describe your cooking style?

European and Northern Californian sensibilities, grounded in tradition but lucky enough to have access to the best raw ingredients in the world.

Can you give me an example of that?

We started making this Basque sausage because piment d'espelette is one of my favorite spices in the whole world. It's this chile they grow in a Basque village called Espelette. It's AOC-controlled, and it has to be grown and harvested in a certain way and from that village. It's got a really good heat, but it's also really fruity. It's just really distinct. A couple years ago, some friends of ours started growing this chile up in the Anderson Valley. Circumstances were very similar. You know, it's not AOC, we're not calling it "espelette," but it's the same chile, just grown here in Northern California. So we started buying that, and I think it actually even got a little better, because it's now so fresh.

Tell me about your sourcing.

Everything except for pork comes from California. And we do buy some California pork, but a lot of the pork we buy comes from the Midwest. It comes from Heritage Foods USA. It's because the program they have going is amazing. They're a co-op. They work with all these small family farmers. They go to them, and they say, "Listen, if you will continue to raise these heritage breeds in this manner, on pasture with no antibiotics, no hormones, we will guarantee you at least 50% over commodity price. We will take everything you can produce every week." And they put their money where their mouth is.

I could run around and buy two pigs from Llano Seco, two pigs from Stone Valley, two pigs from Riverdog every single week. But while we're not Hormel, at the same time, we're big. We go through about 3,000 pounds of pork a week between the two stores. So they [Heritage Foods] curate it.

Do you consider how the meat is processed, too?

You talk to a lot of people who buy a lot of meat, and the big sticking point in California right now is slaughterhouses. There just aren't very many good ones. And part of the problem is no one wants one in their county. It's more important to me to buy well-raised and well-processed meat then to necessarily buy local meat.

Will good meat practices ever catch on nationally?

We're all working toward that. Prognosticating, and saying "Oh, it will never catch on," that's guaranteeing that it won't. And if we keep it as some precious thing that can only survive on the coast, well, what good is it if it only serves like 3% of the people in the entire country?

What do you tell people who complain your products are too expensive?

We're not getting rich off this stuff. We pay farmers a fair price for all the hard work they do, and what we do involves a lot of labor, so that $8/pound pork shoulder, yeah, it might be a little bit more expensive than something you'd find somewhere else. But if you treat it with care and take care of it from start to finish, it's going to be better than anything you'd ever find for half the price. 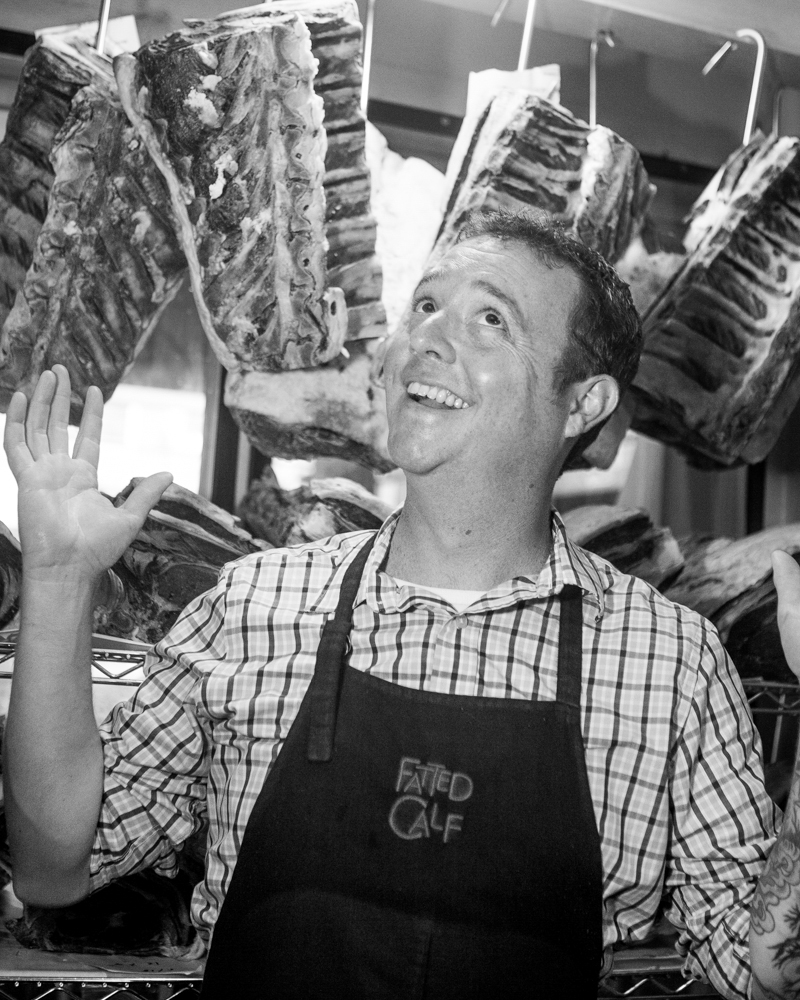 What does it take to run a retail business like Fatted Calf?

It's about more than just raw talent. A lot of it is the unsexy stuff. It's about organization, getting a team up to speed. Building good work habits and not settling, buying the best raw ingredients you can and using them to the best of your abilities.

Are you surprised that "regular people" want to learn butchery and charcuterie?

I think a lot of people want to see how things work, and they want to do something with their hands.

Why did you create the women-only class, Pig + Woman + Knife?

You know, in the whole-hog class especially, we noticed that a lot of times it would be mostly men, and we wanted it to be something that everyone feels comfortable with.

So people still think of meat as a male thing?

We don't want it to be dude food. There's really no appeal for us in this image of some super-macho bro with a cleaver. That's not who any of us are, and that's not what we're trying to send out into the world.

Do you have any meat-related advice for home cooks?

Give it time. I tell people when they buy a pork shoulder from us to think of it as a three- or four-day process…not that it takes three or four days of active work. You buy it three or four days ahead time, and if you want us to season it, we'll do that, but if not, you take it home and put salt on it. That starts the process, so that in three days, you have something that's well-seasoned. And that alone is going to make it head and shoulders above anything you pick up and take home and rush into the oven.

Is there anything you don't make at Fatted Calf that you wish you did?

I would love to make more Vietnamese [charcuterie]. I developed a recipe for the Slanted Door a few years ago, a lap cheong. It was like Chinese sausage, but it had a lot of cooked skin in it, and star anise, and it was awesome. But it's the kind of thing that just doesn't jive with everything else that we do. And it's not because I'm some crazy purist. At a certain point, you start going overboard. It only makes sense to have fifty different products in the case if every single one of them is spot-on every single time.

We've got a grilled Fiscalini cheddar and bacon jam sandwich that's kind of skyrocketing right now, because those words are magical.

What should people be eating that they're not eating right now?

Goat. People should be buying and eating more goat. Goat is the most popular protein in the world.

Do you sell goat?

When people want it.

What's next for Fatted Calf?

We're just going to keep tightening up the programs we have and not get complacent but not look for the next big thing. I feel like after eleven years, we found our footing, and we know who we are and what people want from us and what makes people happy. And that's why I got into this in the first place.