Trou Normand's Salvatore Cracco On His 25 Types of Housemade Charcuterie

Share All sharing options for: Trou Normand's Salvatore Cracco On His 25 Types of Housemade Charcuterie 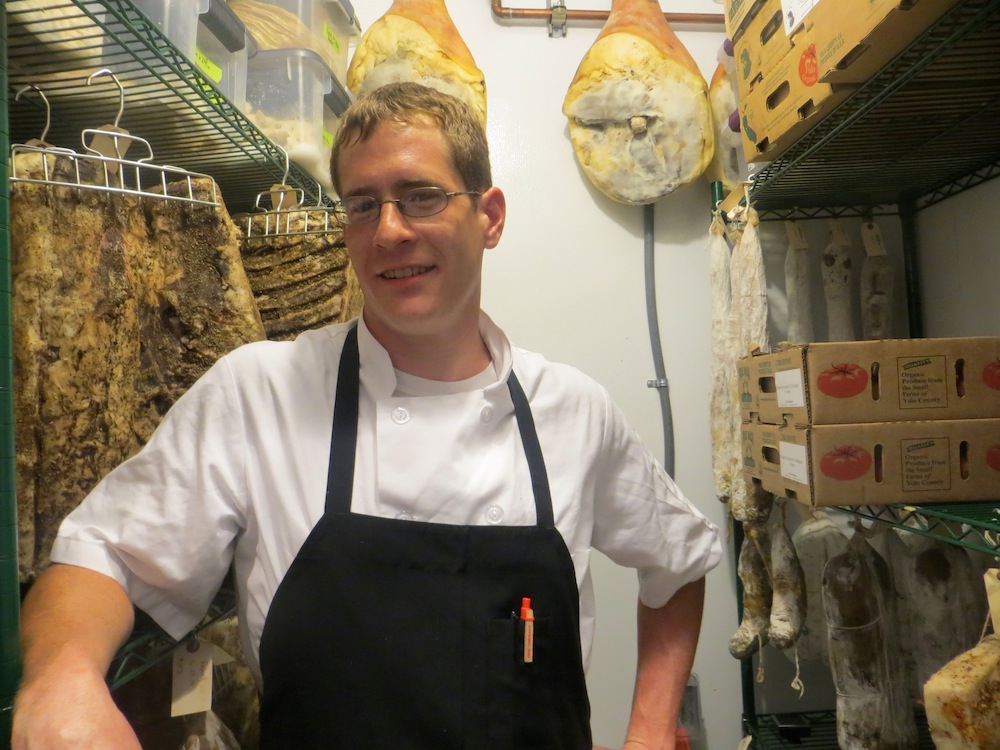 To get a Yelper to comment that you serve the "best charcuterie plate [they've] seen in SF" is especially unique for a restaurant that sits on the ground floor of the ratings juggernaut's Financial District headquarters. Four-month-old Trou Normand takes its charcuterie seriously, and chef Salvatore Cracco wouldn't have it any other way. He learned the ropes at Oakland's Adesso—considered by many charcuterie connoisseurs to be the Holy Grail of stateside pig cutting—before beefing up his butchery skills at Bar Agricole and taking the reins at its downtown spinoff. Though Cracco isn't the type to boast, he will admit that Trou Normand's variety is the largest he's seen in SF. Averaging 20-25 items on a given night, the charcuterie, salumi, and combo boards take up an entire page of the restaurant's menu.

Cracco's sizable list is divided into fresh and dried options, which hang in a special temperature- and humidity-controlled drying room off the kitchen (pictured above). The magic temperature, a crisp 55 degrees, keeps the meat preserved without sacrificing the soft, melt-in-your mouth quality of the fat.

One of Cracco's ultra-authentic Italian creations is the crespone salumi from Bologna, known as the country's meat-curing mecca (mortadella, another regular player on his plate, was also popularized there). Most of Trou Normand's sausage casings are made in Denmark and shipped to Oakland, where they're cut open, laid double-thick, then sewn back together to whatever diameter and length Cracco requests. They're considered natural, since they're intestines, but they're a bit unnatural in that they don't come directly out of an animal as is. But Cracco's crespone lives up to its Italian name, which translates to "casing." The intestine comes straight out of the hog, in a crazy shape Cracco describes as "curly, crinkly and weird." (In the South, it's stewed for chitlins.)

All of Trou Normand's pork comes from an expensive European pig breed called the Mangalitsa, which is a rare find on American charcuterie boards. Its fat, which is whiter in color and creamier in texture, is what sets the exotic pig apart from its distant US relatives. These Mangalitsa pigs' diets don't contain corn or soy, so as the product dries, the fat doesn't go rancid. Cracco creates two types of lardo with the prized pigs: one has caraway, the other, green peppercorn and thyme.

Cracco's pâtés are among his most seasonal options, incorporating of-the-moment produce. The current trio are chicken with preserved lemon and verbena, pork with fennel, and rabbit with flamingo peppers and basil. His salamis, ground sausages that are fermented and dried, come in flavors like finocchiona (fennel), porcini, thyme, and oregano varieties, though they can all count garlic and wine as primary ingredients.

Trou Normand's dry-cured belly is like pancetta, but with a different flavor profile that incorporates allspice, thyme, fennel, and rosemary. Lonza and coppa are whole-muscle salamis, meaning they aren't made from ground sausage. The lonza, made from pork loin, features accents of brown sugar, sage, bourbon and allspice, and the time-intensive coppa gets a spicy twist via paprika and Calabrian chile. It's cured for two weeks, then fermented and dried for up to three months.

Each charcuterie board arrives with a chunk of pain d'epi and two miniature bowls: one of coarse-ground mustard, and one of Cracco's meat gelee. The latter, a squishy golden egg that seemingly glows on the wood slab, is a combo of the skin, tails, and ears of the pig, all of which are naturally rich in gelatin.

Even though Trou Normand is a recent addition to the local scene, the charcuterie has already become a calling card for Cracco. Michael Bauer called it "meticulously crafted," while Anna Roth said she was "rendered speechless by a few of the items."