Each year, our sister site Eater NY engages in a proud tradition known as Shitshow Week, in which the worst of the worst of the city's restaurants get their turn in the spotlight. And while the SF food scene doesn't boast enough restaurants that are true shitshows, we have decided to steal one of Shitshow Week's best traditions: The Airing of Grievances. Below are the anonymously penned gripes, frustrations, and outright annoyances that are driving local food writers up the wall. In short, they've got a lot of problems with you people, and now you're going to hear about it.

1) Enough with the Ike's sandwiches. They're overrated, messy collections of ingredients that have no right to be in the same sandwich. Even stoned, I've never understood the hype. Maybe I've just never had the right combo, but then, who has the time or caloric budget to experiment with that massive menu until they find one that's sort of okay?

3) I walked past Ryan Scott's new Mason the other night, and its menu was basically generated by Eater's Trendy Restaurant Menu Generator. Avocado toast. Deviled eggs. Roasted Brussels sprouts. Blistered shisito peppers. Beet salad with strawberries. Thin crust pizza with a few quirky toppings. Not really to pick on Mason per se, because it's just one part of a much bigger problem, akin to the rampant subway tile/reclaimed wood/Edison bulb-ism. All this sameness is terribly boring.

5) Two newly-opened, high profile chef-backed restaurants have the gall to charge $17 for their mediocre burger, and then refuse to cook it less than medium well (what is this pink/no pink thing?) I don't so much mind paying the asshole tax for ordering a burger when I should be ordering something that showcases the chef's "talents," but if I'm going to pay through the nose, cook my burger how I want it, and don't serve it with a measly pile of fries, or f--king potato chips!

6) Seemingly every new restaurant's menu has set aside the classic designations of apps, starters, and entrees, replacing them with a list that has no indication of dish size apart from the price. Often, you won't know whether you're ordering a tiny but pricey starter or a full size entree without asking your server, and it seems like a clever way to leave diners hungry, or broke, or both.

8) The noise, the noise, the noise. I don't mind a little buzziness, but when the music and ambient sound gets to such a level that I can't really hear the person across from me, I start wanting the meal to be over as quickly as possible so we can go somewhere else and have a conversation that isn't punctuated by "WHAT?". Especially annoying if you're there to have a personal chat or heart-to-heart or really any sort of back-and-forth at all. Bring back tablecloths! 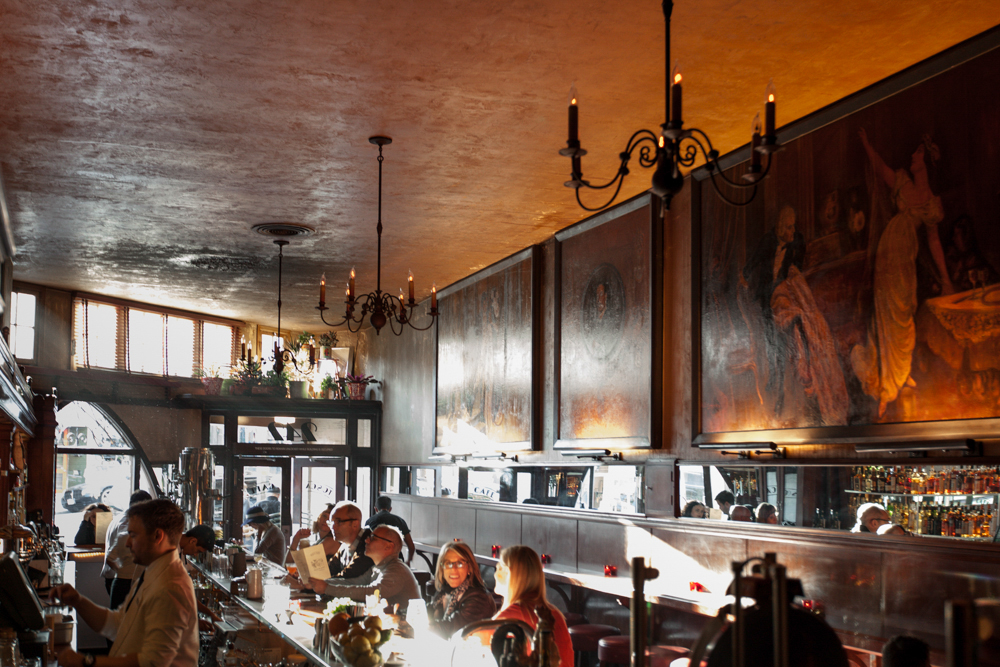 9) Tosca Cafe: Great atmosphere, pretty good food, decent drinks, but it is both overhyped and overpriced. I'm glad that April Bloomfield and Ken Friedman helped preserve a legend, but wish the New York food media would stop treating it like they were the goddamn second coming.

10) Tosca Cafe being voted Bon Appetit's #4 best new restaurant in America. Are you serious? This proves not that it's a great restaurant (and I like it well enough), but that the NY media wears big fat fucking blinders when it comes to anything Bloomfield-Friedman-generated.

11) We live in arguably the best food city in America, and all the New York-centric food media seems to be able to see is State Bird, Saison, and Tosca Cafe. And Tosca isn't even all that good—fine, but nothing close to the other two. I seriously wonder sometimes if April Bloomfield and Ken Friedman are blackmailing people.

12) While it's refreshing to have quality cocktails now mainstream at many restaurants and bars, it's maddening to see far too many very average menus masquerading as "craft cocktails," when they take little skill to create. There's a glut of menus featuring easy cocktails (like bucks or mules, dark and stormys, palomas), which it doesn't take much experience to make, though there can be superior versions in experienced hands. Such menus list just enough buzzword ingredients or ubiquitous classic cocktails (the Boulevardier or the Last Word, for example) to sound as if they are made for cocktail lovers. Worst of all, these cocktails — which are easy to make at home or for the amateur bartender — still cost $10-$13, right alongside more complex cocktails that take more skill to create and prepare, and are made with costlier ingredients than soda or ginger beer.

13) What kind of monsters do not include chips with the purchase of a burrito?

14) The number of restaurants who take delivery orders over the phone (mis-hearing your address over and over, putting you on hold, etc.) but aren't set up to take orders online blows my mind. I do not want to spend 10 minutes on the phone with you saying my phone number again and again.

15) We live in the year 2014, and there are still no decent pizza delivery places in SF. Arinell, Pizza Shop, Little Star—someone, please, for the love of God. 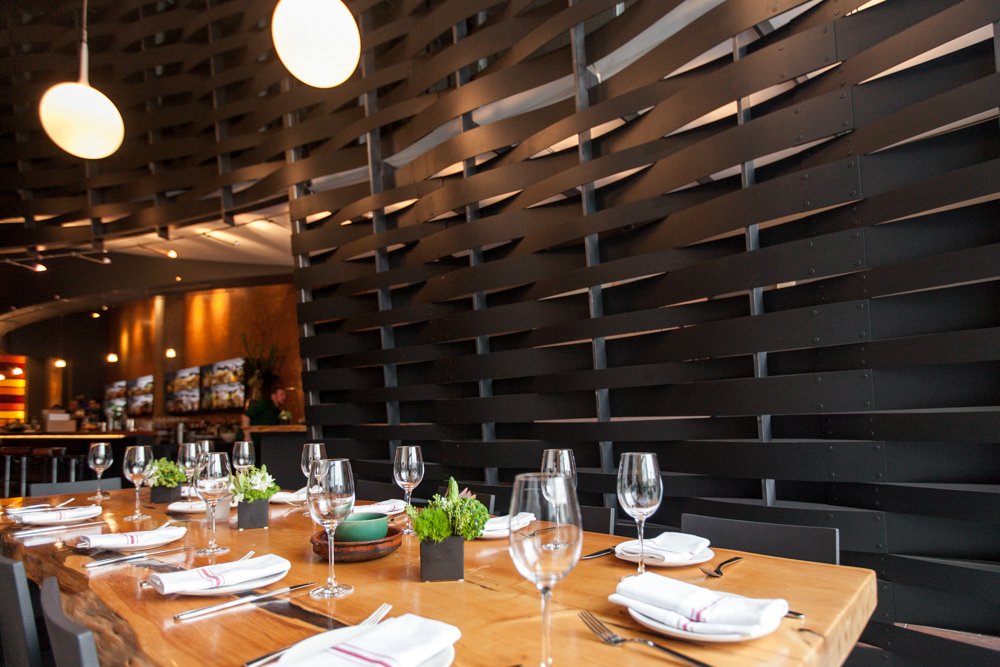 16) Really, San Francisco? The English gastropub? In 2014? I know, I know: restaurateurs and chefs need safe, bankable concepts, especially these days, but rolling out The Coachman and The Cavalier feels like the most depressing kind of regression. Gastropub frenzy hit the UK in the early '90s, just about the time Rick Astley was topping the UK charts with "Never Knew Love" and the smell of Maggie Thatcher's lavender toilet water hadn't quite dissipated from the curtains at Number 10. Upscale versions of bangers and mash and steak and kidney pie were all the rage in Britain, then in the U.S. (in L.A. and Manhattan), cresting in 2004 with the launch of Ken Friedman and April Bloomfield's The Spotted Pig in the West Village. That was 10 years ago, people! And here we are, five years after The Tipsy Pig on Chestnut gave Michael Bauer the staggers, dragging unironic versions of bangers and steak and oyster pie and scrumpets back on the menu, as if toddling down to the local for a bitter with a tuck-in and something scrummy for afters is bleeding edge in the 21st century. This is embarrassing.

17) Bartenders looking at me askance for ordering a vodka soda. Do I know it's basically flavorless except the lime I squeeze in there? Yes. Do I know there are much better, well-crafted drinks out there? Yes. I just don't feel like drinking 1,000 calories just to impress you with my palate while I'm trying to get a decent buzz on.

18) It is a goddamn crime that San Francisco has so few nice seafood restaurants on the water to bring parents/rich out-of-towners/friends on business trips and show off how great this place is. Especially considering the city is bordered by water on three sides.

19) People who bring their non-service dogs into a restaurant and claim they are service dogs, complete with forged badges. I understand and respect the need for service dogs, but you and your dumb chihuahua are ruining it for the people that actually need to be accompanied by service dogs. 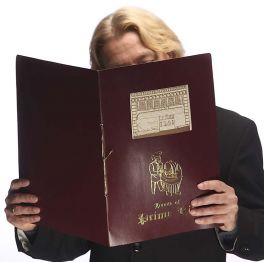 20) Michael Bauer needs to go. The New York Times has a great system where they cycle in new talent every few years, which keeps things fresh (and about as anonymous as possible in this day and age). Looking beyond the fact that he's been doing this same job for three decades, is recognizable to absolutely everyone, and is good pals with so many local chefs and restaurateurs, the guy is simply an awful, awful writer. Let's also not forget that his long-time partner has invested in several San Francisco restaurants, all of which, unsurprisingly, receive great reviews and frequent praise, all while not being publicly disclosed by him or the Chronicle. Talk about journalistic integrity.

21) The continued, mind-boggling reign of Michael Bauer. His reviews are written with the skill and insight of a seventh-grade book report.

22) The surly bartenders at the Toronado. If you are that angry and rude all the time, you should not be in the service industry. Go someplace where that's acceptable, like Comcast customer service.

23) Eat Drink SF. That thing really needed to be better curated. Opening night was nothing but raw fish and terrines, the easiest things to serve to a crowd. It could be such a fun event, if it were different. 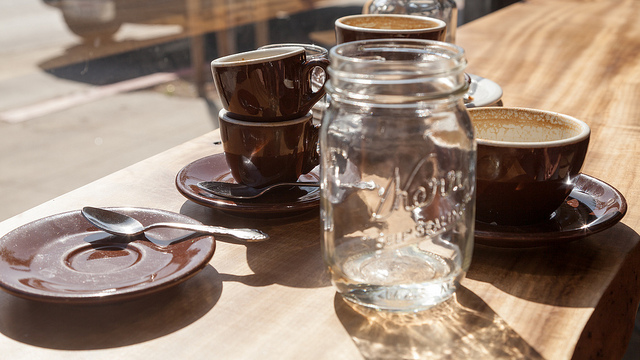 25) Coffee places that refuse to serve anything to drink other than coffee. I'd love to continue drinking coffee all day, but if I have it past noon, I'll be up all night. And until I can convince people to have meetings over ice cream, I'd really rather not be stuck drinking a glass of water because you're too cool to serve tea or soda or chai. Looking at you, Four Barrel and Sightglass.

26) The continued masturbatory love for Humphry Slocombe. I used to count myself among its adoring ranks, but my last couple of visits have convinced me that something doesn't smell quite right. When professional ice cream makers can't get their consistency right—the stuff's either always half-melting or half-crystallized—from one visit to the next, there's a problem. They repeatedly commit unspeakable crimes against sorbet, both flavor- and texture-wise; their basil lime is like the lovechild of Pine-Sol and snot. Also, scoop size varies wildly, possibly depending on how stoned the scooper is, which becomes an issue when it's $4 a pop.

27) Chino: How did you open a dumpling restaurant and not manage to make the dumplings good? 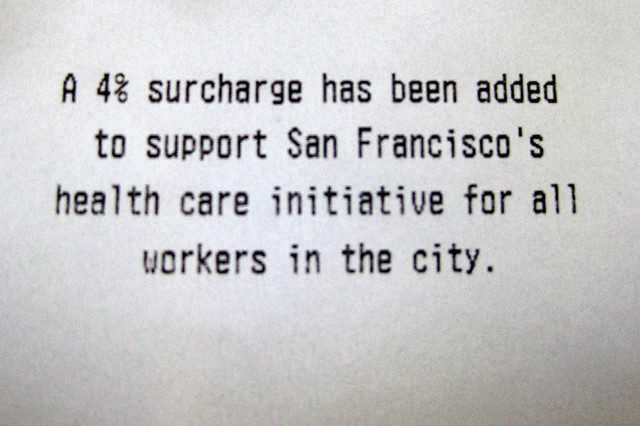 28) More often than not, the Healthy SF surcharges (or however they are phrased) still strike me as more beneficial to owners than workers.

29) Restaurants that serve small plates and recommend three or four dishes per person need to serve their food on actual small plates, so it all fits on the table. No more of this "pile everything in the middle and leave the rest of the plate as bare as the surface of the moon" bullshit, which leads to awkward dish re-shuffles every time something new arrives.

30) We all like to pick on Yelpers for being obnoxious self-entitled diners (and rightfully so!), but let's not let food writers off the hook either: There are a lot of obnoxious food writers doing similar things. Every industry has morons.