Share All sharing options for: Smuggler's Cove to Open Gin-Centric Sequel on Polk

Hayes Valley's Smuggler's Cove is generally considered one of the best rum bars on the planet, with a killer collection of 500+ bottles. Now, owner Martin Cate is hoping to do the same thing for gin that he did for rum. Along with bartender Alex Smith and John Park (managing partner at Novela), he plans to open a gin-centric bar, Whitechapel, in the former Noble space at Polk and Turk, stocking a collection of more than 400 gins and genevers that aims to be North America's most comprehensive.

The concept actually started with Smith, a Chron bar star who worked as a manager in Smuggler's early days before leading the bar programs at Novela and Gitane. "He's one of the most talented bartenders I know, and he gives me credence as a rum guy," says Cate, who's really excited about gin's current breakout status in the craft spirits world. "I think gin is really underappreciated, and it's absolutely booming right now. There's a real decline in low-quality gin sales, but premium and ultra-premium gin sales are on the rise. I think it's got a really unfair reputation as being a fuddy-duddy spirit, and it's great in cocktails." Smith's cocktail menu will showcase gin's versatility and history, with recipes that play on the character of individual types and styles of gin. Distillery No. 209 will create a special house gin for Whitechapel, and Smuggler's Cove's popular Rumbustion Society will have an equivalent, the Polk Street Irregulars.

At 100 seats, Whitechapel will be a good deal larger than Smuggler's, and Cate says he's working with a high-volume bar consultant to ensure drinks come out in a timely fashion. "At this size, we have to be able to execute," he says. Another big shift is that Whitechapel will have food: Caleb Jones (Claudine, 20 Spot) has been hired as chef, and plans to offer a menu of shareable bar snacks that are influenced by British and Dutch food (the home bases of gin and genever, respectively), as well as by Bangladeshi flavors (the real Whitechapel, in London, is heavily Bangladeshi). Some of the food may incorporate the botanicals used to make gin as well.

The creative decor at Smuggler's will carry over to Whitechapel, whose look Cate describes as a Victorian-era distillery that happened to open in an abandoned London Underground station. Just don't use the s-word. "Our motto at Smuggler's is that we're not a pirate bar, but we're pirate-friendly," says Cate. "Whitechapel is not a steampunk bar, but it's steampunk-friendly." If all goes according to plan, the steampunk-friendly can expect Whitechapel to arrive in January 2015.

And for the visual learners out there, Cate was kind enough to fill out our hipster bar checklist, to give you an idea of where Whitechapel will stand. 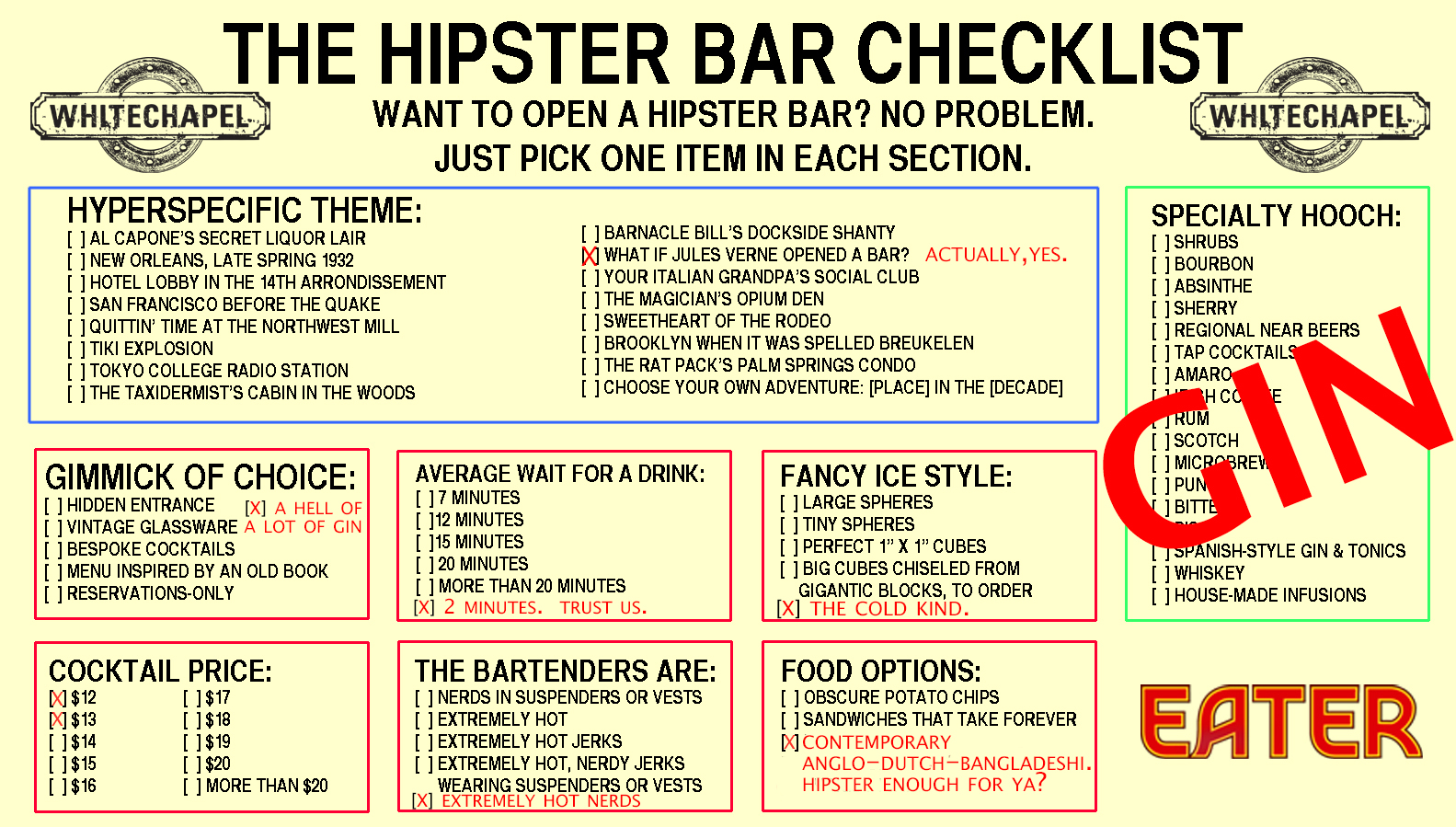