Why Bissap Baobab's Owner Bought a Canoe For President Obama

The Mission pioneer recalls removing bullets from his restaurant's exterior.

by Eater Staff Jan 27, 2015, 10:23am PST
Via Bissap Baobab Expanding to Oakland [ESF] and Little Baobab Kickstarts After Fire [ESF]

Share All sharing options for: Why Bissap Baobab's Owner Bought a Canoe For President Obama

Welcome to Lifers, a feature in which Eater interviews the men and women who have worked in the restaurant and bar industry for the better part of their lives, sharing their stories and more. For Classics Week, we're rerunning an interview with Bissap Baobab's Marco Senghor from June 2014.

"To find yourself, you want to forget who you are," says Marco Senghor, proprietor of Bissap Baobab, the 18-year-old West African/Senegalese restaurant and club in the Mission. He arrived in San Francisco in 1989 as Marc Olivier Senghor, grandson of Léopold Senghor, the lauded poet and first president of Senegal. Eager to create an independent identity, Marc Olivier dropped his last name and adopted the nickname "Marco," bestowed by neighbors who assumed he was Latino.

Senghor settled in the Mission, where he discovered familiar ingredients like tamarind and hibiscus and a diverse community that welcomed him without prejudice. Soon, he moved into an abandoned building on 19th Street between Mission and Capp, which temporarily served as his home and later became Little Baobab.

When he opened the bigger Bissap Baobab restaurant next door, the original site became a nightclub until a fire forced it to close in May 2013. It's now back in business, accompanied by a new Oakland location that doubles as a late-night African taqueria, or dibiterie, as it's called in Senegal. There, Senghor serves "Afro wraps" made from whole-wheat tortillas dipped in mango sauce and filled with lamb or chicken curry.

We spoke with Senghor, who doubles as a globe-trotting DJ, about the evolution of the Mission, the gift he tried to give President Obama, and why his funky restaurant/club continues to pulsate with a diverse and constantly-evolving crowd.

What does "Bissap Baobab" mean?

Bissap is a hibiscus flower. Baobab is a tree. The flower is very flexible, and the tree is strong. And in Senegal, where my dad was from, in a village called Joal, we used to bury very important people inside the tree when they passed, so the tree is united by the spirit of your ancestors. It's a tree of knowledge. It's a tree that protects people. When I started the Baobab, I said, "Hey, if I have to give it a name, as a business in America, I will call it baobab, because I'm far away from my community, but I will be protected by my tree." And that's what happened.

How did you get started in the food business?

I used to make a ginger drink. I started [doing a] little juice manufacturing out of my house, doing 10, 20, 30 bottles, but eventually, I ended up making thousands of bottles out of my house. And by cooking so much juice, the ceiling of the building fell down, and everyone got evicted. They were like, "This guy is crazy." And I was, because I don't stop.

And then you started cooking?

I never used to cook in Senegal, because in Senegal, if a boy goes into the kitchen to cook, it feels like he doesn't trust his ladies. But I used to hang out in the skirt of my grandma all the time when I was a kid. And then I had six sisters older than me, and my sisters used to cook all the time. So I used to watch, without the right to cook, but inside of me, the desire was burning to one day reveal what I know, so when I came on my own to America, I had to recreate what I was missing.

You're well known for your cocktails. How did you learn to mix drinks?

Ginger, tamarindo, hibiscus—making all this juice is what I've been offering people for a while. Then eventually, fifteen years ago, I met a young hipster girl—actually I call her bohemian—with big glasses, who was a writer. Her name was Clane Hayward. She was a bartender, and she walked to my place with her big glasses, and she says, "You know what? You're a good man. I want to tell you something. You need to make cocktails. You have excellent juices, Marco. I want to teach you about liquor." And she give me a little class in ten minutes. First night, I'm alone doing the bar. People ask, "Can I have a ginger margarita? A hibiscus margarita?" And people start to say, "Oh, the drinks are great. How long have you been a bartender?"

How did Baobab transition from restaurant to nightclub?

There's a very famous guy who came here. His name is Michael Franti from Spearhead. That's a band. He walked into the place—I was by myself—he said: "Hey, my brother, what are you doing here?" I said, "I'm a restaurant." He said "Here? But nobody's here." And he's like, "You want me to bring you some people here?" So we scheduled a show. 400 people showed up! We could fit maybe only 80 people inside the place, and everybody was outside, trying to get in.

What happened after the show?

[Franti] started recording an album called "Live at the Baobab with Michael Franti & Spearhead." So I had phone calls from all the musicians in the world, telling me, "We want to come and record in your studio." I'm like, "In the studio? What studio? This is my restaurant." So it became kind of a crazy spot. 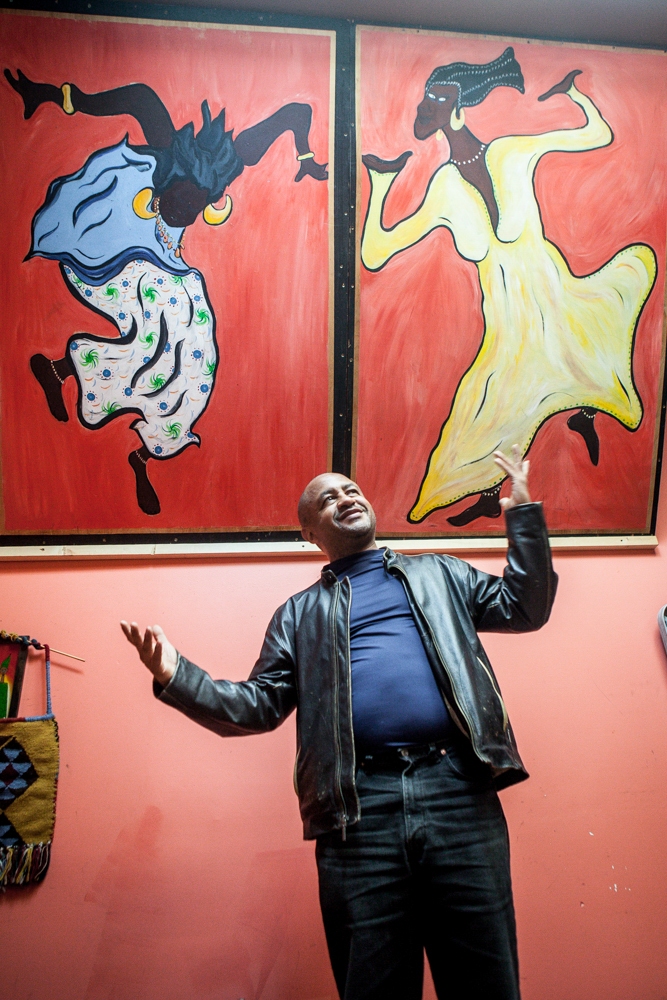 What was the Mission like when you first arrived?

Ooh, when I arrived here, nobody wanted to come here. Everybody was really scared to come to 19th and Mission, and between Mission and Capp, especially Capp Street. There was prostitution. People got raped. It was a nasty street. I used to have people shooting guns into my building, so I used to go outside trying to remove the bullets. I was like, people are going to be afraid if they see bullets.

As the neighborhood started to gentrify, how did your clientele change?

Like all the original people, they all left. First of all, all the gangs, most of them died. The prostitutes are all gone. It's not like I cherish prostitution, but they were all my friends. They were real with me in the streets. The yoga people came with Michael Franti, because he's like a leader in the yoga community. They love peace. They're not afraid of meeting minorities. Then the artists start coming—the painters, the musicians. And then superstars come from all around.

And what about now?

San Francisco started becoming more and more expensive. You see all these people who make so much money from Palo Alto. I've been lucky, with the new people coming on. The reality is they have a spending limit ten times higher, so business-wise, we have been doing much more than ever. These young people are not all born and raised here in California, so they need to recreate family too. They come in a group, and one group will probably spend as much money as used to be spent in the whole restaurant before.

What is teranga, and how does it relate to Bissap Baobab?

Teranga is based on the idea that the more you giving to someone, the more you'll be blessed in the universe. I realized in coming to America that a lot of nonprofits are doing social work to make a community much better, so they need to do fundraising. So, I'm thinking, "Hey, we're cooking food. We have a lot of people here. How about if we develop an idea where we give them a percentage of what we're doing by putting the teranga out?" I don't believe in the success of owning a place and my community around suffering. If I'm here, it's because my community supports me.

If I want the most authentic Senegalese meal, what should I order?

If you come on a weekend, the main dish is called ceebu jen. We do it Friday and Saturday, because it takes so much time to do, but this is a main official dish of Senegal. An excellent dish where you cook some tomato stew with fish inside. Then you remove the fish, and you remove the veggies. Then with the boullion, you cook the rice, so it's a red rice.

What about on a non-weekend?

I created a tofu based on what we do in West Africa, and it's made with black-eyed peas instead of soybeans. Exceptional! Everybody's been asking me, "How do you do it?" I should probably share one day, but for now, I keep my recipe secret.

Did you really buy a canoe for President Obama when he ran for a second term?

We bought a boat in Senegal, where they put a picture of my grandfather on it, and the picture of Obama next to it. And then during the campaign in the second term, I was going to offer it to Obama. I contacted the Democratic Party, but then they said, "We appreciate very much the gift, but we can't make too much noise about it, because it may affect the polls." So I kept the boat, and I have the boat in my restaurant in Oakland. If he comes to the restaurant, that's his gift waiting for him.