How Alice Waters Made Me Believe in Cheap Food

Community is about more than what's on the table.

Share All sharing options for: How Alice Waters Made Me Believe in Cheap Food

I came up as a cook in the basil-and-fraises-des-bois-scented shadow of Chez Panisse. In the 1980s Alice Waters talked about the power of food with a direct line to ranches in West Marin, Berkeley backyards with sorrel and oak-leaf lettuce patches, and rain-sludged Napa hills combed by chanterelle hunters. This, she said, was food so connected to a local system, a community of producers and eaters, that it couldn't help but knit us all together is some glorious spirit of connectedness around the table. 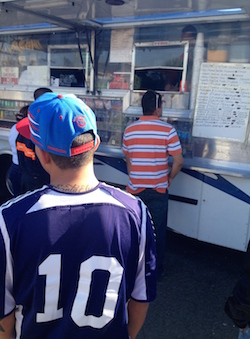 It was crap—well, mostly crap. Community came at the price of entry, which was never actually cheap. It wasn't until I learned to respect food that cost only a couple of bucks, at most, that I felt connected around a table or, technically, the little stand-up counter next to the patina'd quilt-metal wall of a taco truck.

Sometime in 2007 I discovered (to be scrupulous, columbused) the part of East Oakland called Fruitvale: a taco truck, at least, on every block, down a wide, perennially sun-strafed avenue of restaurants, quinceañera boutiques, and remittance centers. On Sundays International Boulevard was crowded with guys in boots and cowboy hats, moms and dads pushing strollers tied with shiny Mylar balloons, and the food—Jesus. It was everywhere: $1.50 tacos of lengua and pastor, liquados in plastic-foam cups, elotes flocked like velour with chile. 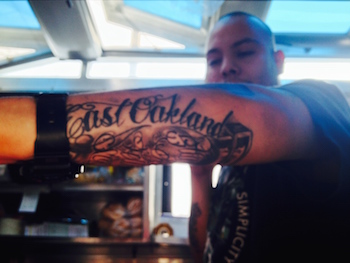 Honestly, it made me cry. Buttoned up in my naïve, privileged white-guy assumptions, I'd thought coming together around food was a thing effected solely by reverent, hushed Babette's Feast-like exercise in transcendence. In Fruitvale, cheap food cooked from common ingredients, feedlot meats and commodity beans, made the culture of the street possible. The spirit I'd been looking for in bowls of tagliatelle with truffles and stinging-nettle pizzas, delicious as they were, was here, in food everybody could afford and that defined a public culture of eating together. The everybody-being-able-to-afford-it part was essential, the matrix of community, the condition of a shared life.

I'm pretty sure Alice—if she could have ever stopped being Alice for a second—would've loved it.